When Josh asked me to write about collecting in general I was overcome with the idea of writing, I collect toys because I like them, 100 or so times and sending it to him. What else could I write, collecting is a very personal thing. How else could you explain Pez collectors? Like most realities, the collection reality exists for the collectors alone. It only makes sense to them. 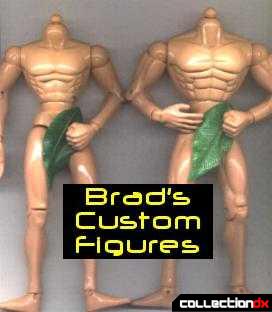 To question it would be would be like questioning our own existence. People collect, because people like to collect. Given this, I felt completely lost when I put pen to paper to write this (that's a metaphor, cause I am really on a PC, with a spelling checker, 'course I'll probably still misspell a few things).

Rather then talk about what collecting is, I want to talk about what it isn't. My logic professor said, "If you discredit all of the fallacies in an argument then you are left with the truth". Strong words considering I took his course in ethics and he discounted the belief in absolute truth in favor of subjective truths based on the mores of a society? He was a hell of a teacher even if he was full of crap.

This would seem to be a given. A collector collects "things", which is by natural materialistic (note: how much shelf space would a collector of ideas need?). However we commonly refer to people as materialistic only in a shallow and selfish way. Materialism has come to mean collecting things to impress others. If we use this connotation then collectors collect to impress others. Just doesn't hold water when you look at it that way does it? I can't really see a toy/comicbook/pez/troll collector out at a singles bar telling everyone he/she meets that they have a big collection. In fact many collectors forgo luxuries like expensive cars and swimming pools in favor of adding new items to their collections.

Fallacy #2: Collectors need to get a life.

For some reason it is assumed that if you like to collect something that you ignore other parts of your life or that you have nothing else in your life to begin with. This couldn't be farther from the truth. I have met countless collectors that are married, have children that they adore, are involved in religious and or charitable organizations, and have successful and rewarding careers. These people are not collecting to fill a void in their lives. They don't need to get a life, they already have very good ones. Collectors are not trolls living in their parent's basement, they are happy productive members of society.

I am not really sure what anal-retentive means, I think it is just a buzzword thrown around to pigeonhole anyone who is organized and methodical into a "disorder". Seems everything has to be a disorder these days. When I was a kid you could lay back and look at the clouds and let your mind wander, imagine that you were flying, imagine that you were a pirate or a soldier. We used to call it having an active imagination, now we call it an Attention Deficit Disorder. That's not to say that there aren't real disorders, but I think we have gone way too far in trying to get everyone into therapy.

Having said all that I'll refrain from making any butt jokes about what I think anal-retentive means (just think, picking up a billiard ball without using your hands. Jim Rose would be so proud). I have met many collectors that were organized and methodical as well as many that were disorganized and chaotic (I'm the latter. That came as a surprise, didn't it.)

You will hear this most often from people who play tennis, golf or run. I am not sure why they believe this other then that they want to feel superior. Again it just isn't true. I have met collectors that do everything from fight fires to practice kung fu. Making an assumption about a person's health and lifestyle based on their hobby is not terribly accurate. You have no idea how many overweight, out of shape golfers there are. Collectors come in all shapes, sizes and activity levels.

After taking a look at what collectors are not it's pretty safe to say that a collector cannot be defined as one type of person. The truth is that collectors come in every age group, every economic group and every race. We are just as healthy, as well adjusted as everybody else.

So while you may hear us say that we're geeks, or that we are obsessed, or that we need to get out more, understand that those are all inside jokes. We are just like you. Now come on in and see what all these geeks have been obsessing over while their lives passed them by!

Brad Walker collects American and Japanese action figures, customizes them, and "hangs out" by sitting on the hood of a car drinking Colt.45 at his local Dairy Queen parking lot. "Gai-Jin" is what he calls himself, but most folks call him "white trash". You can reach him at gaijin@zappowbang.com if he can get his PC to work, and if he's in a good mood he will reply.You can also visit his custom action figure site here: http://members.tripod.com/~bwalk06/. For "big ass robot shampoo bottles (Shogun Warriors)" go here: http://members.tripod.com/~bwalk06/shogun/