One of the great pleasures in toy collecting is finding hidden treasure. To me, these are the obscure toys that nobody even knew existed. For a while, you could find them in the usual circles, but hang around anywhere long enough, eventually everyone has seen it all.

With Japanese toys, most deals are found in the US, Japan, or Hong Kong. As you get more in depth, you find that Japanese toys had a huge presence in Europe and surprisingly South America. Dave has scored some great treasures from Argentina and Venezuela. These are not just toys made in Japan and sold overseas; these are original toys, made by local companies. They are often just bootlegs, copies of existing toys in different colors or plastics. As the scope of the hobby continues, so do the discoveries. Companies like Jugarama from Mexico and SEHO from South Korea have put out toys based on Japanese characters with their own unique spin.

The great thing about these “bootleg” toys is that there seems to be a never-ending supply of them. Just when you think you have all toys of a character, another weird piece pops up on eBay.

Thus is the case with this group of toys. Dave found this lot during one of hid routine searches on eBay. As you might know, I am obsessed with Raideen, and collect everything I can get my hands on. The image in the auction was rough, but there was an orange Raideen I didn’t have, accompanied with some other plastic figures. The auction was won, and when the package arrived from Thailand I discovered the treasure within.

This lot of figures appears to be original toys from Thailand – all based on Japanese characters. They are unarticulated, inaccurate figures – some are dirty from years of storage. They look as if they were made by folk artists in villages, with only beat up magazine covers for reference.

Some of the toys bear a makers mark – ANT’. No date or location, just a simple mark with a drawing of an ant with it. 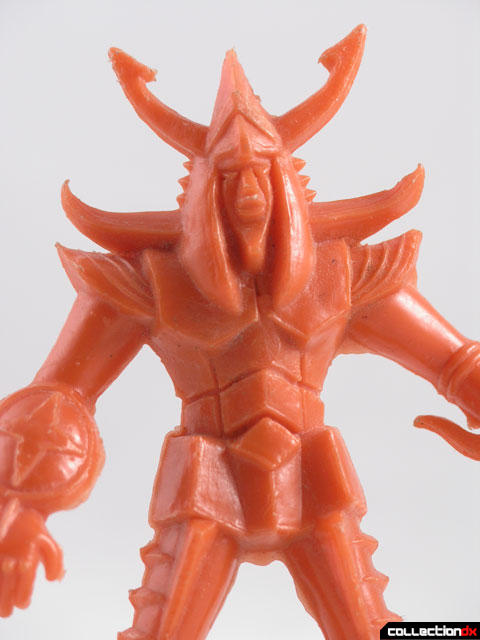 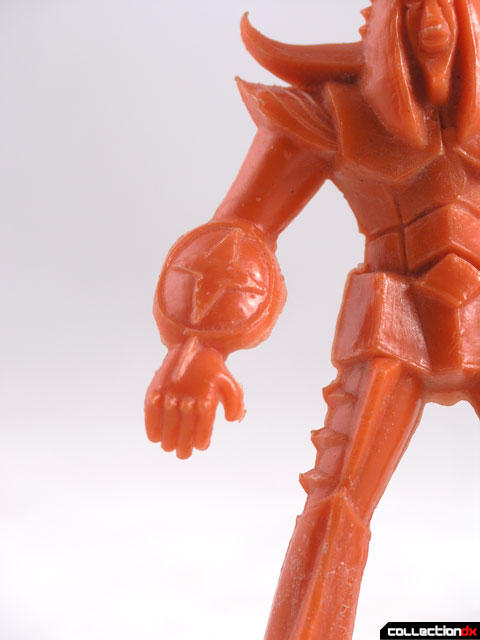 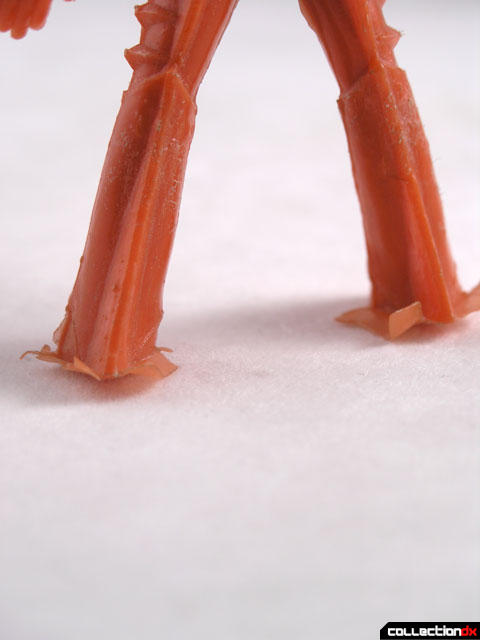 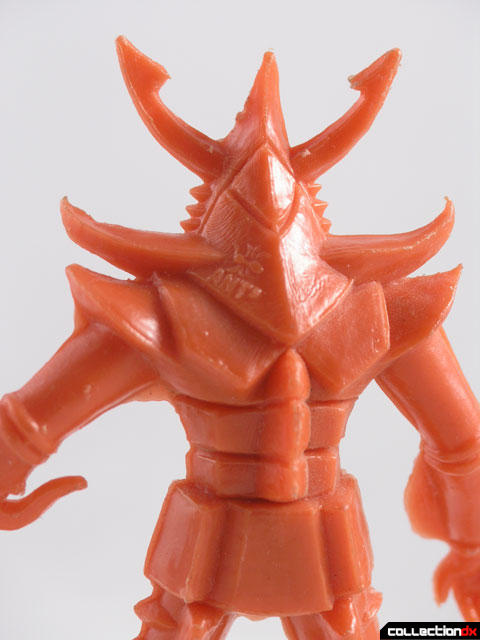 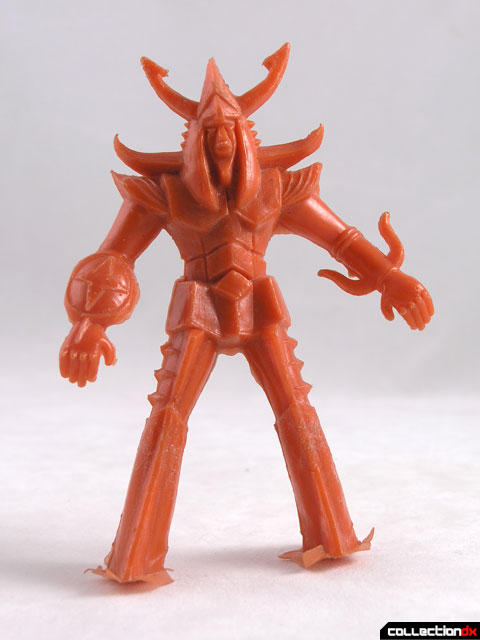 The Raideen was the reason I bought this lot. The sculpt is fairly dynamic, and the lines are nice and sharp. The toy has a solid feel to it. Some liberties were taken with the design of the shield, probably from the artist not having reference to it. I love that flash from the mold is intact in this figure. There was no finish work here – these toys came out of the mold and into kids’ hands. This toy is stamped ANT on the back. 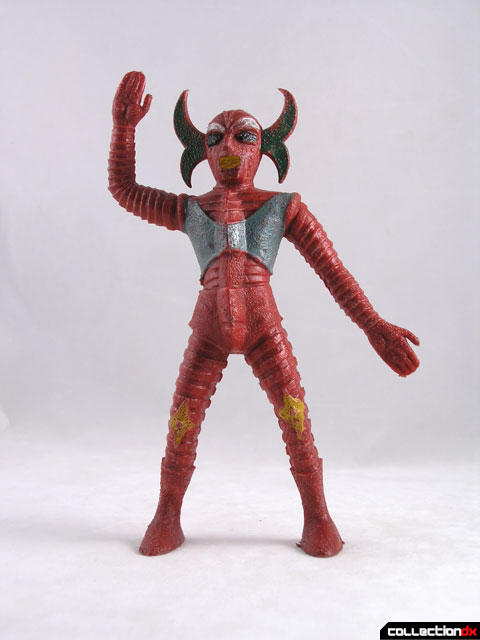 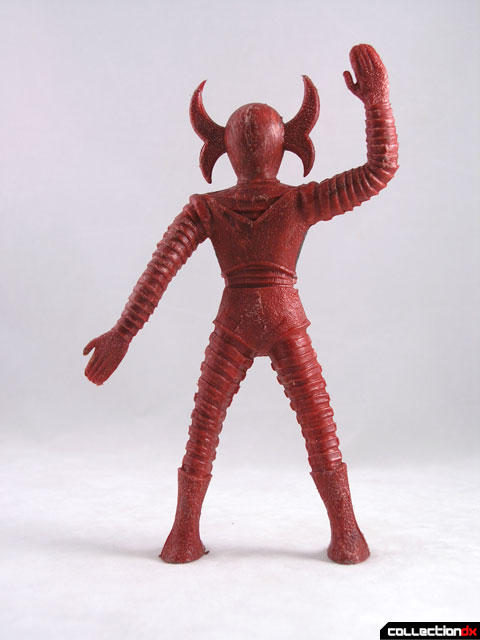 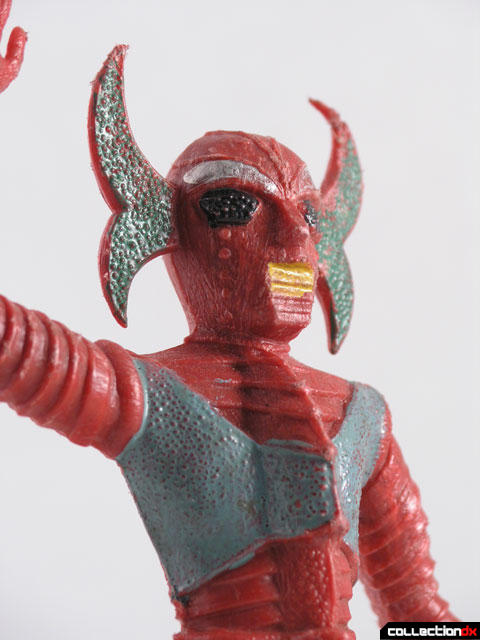 Denjin Zaboga is the tallest of the lot, coming in at about 8 inches. The surface of this figure is very rough – each surface is textured. This is the only figure of the bunch that has more than one color application. Grey paint is sloppily applied to the chest and horns, with dabs of yellow and black. It is possible that this paint was added by a child. 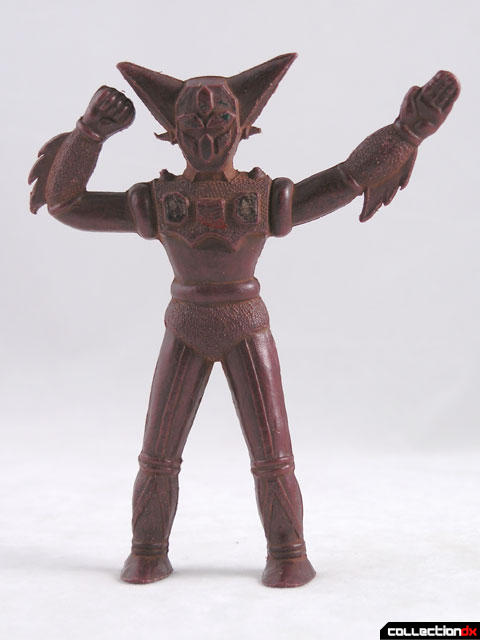 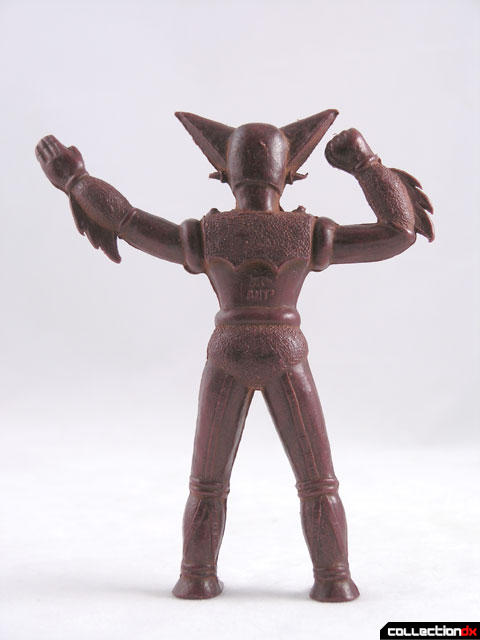 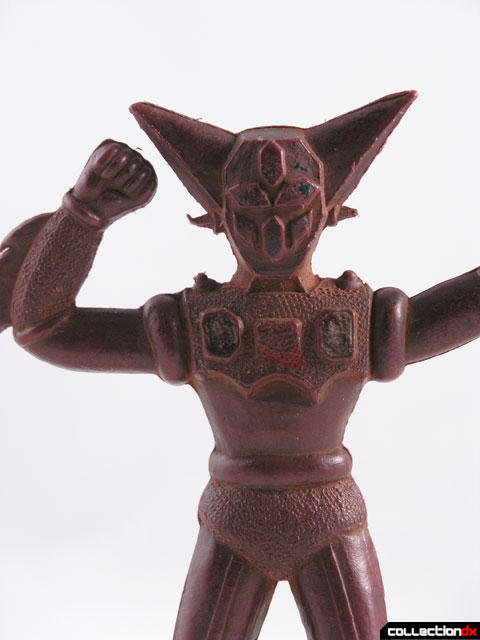 Getter 1 is also made by ANT, and has definitely had a hard life. Once again this toy is filled with texture. You can almost see the chisel marks that the artisan made when designing it. There are areas that look like it may have had color at one point. 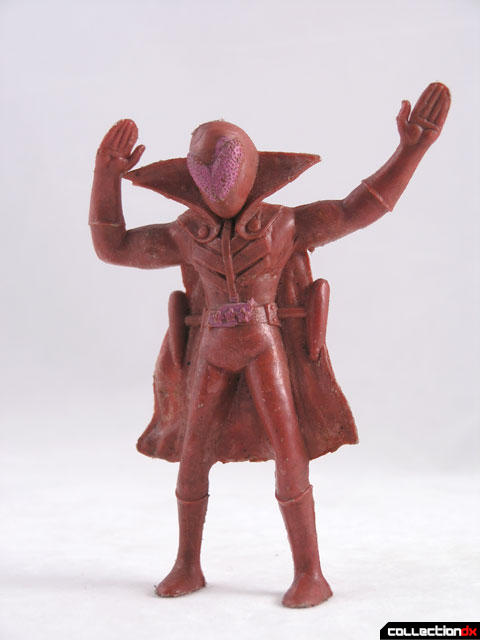 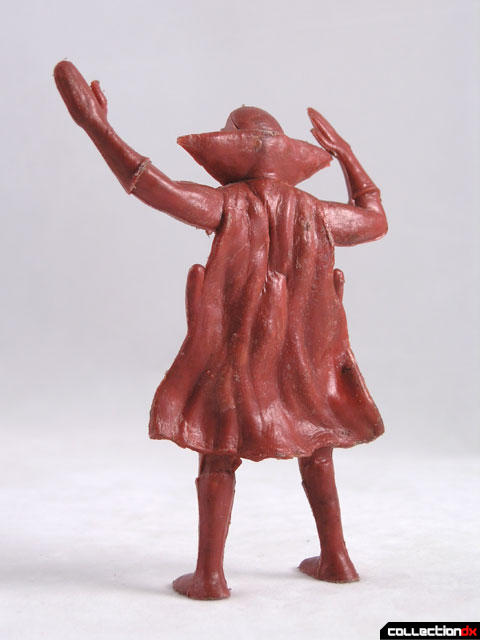 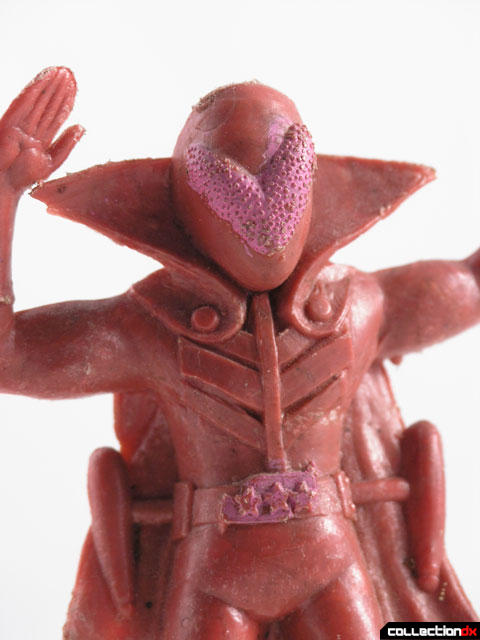 Momoranger was the pink ranger from the original Gorangers sentai series. While the original character is female, this sculpt is very much male. There are pink highlights on the head and costume. 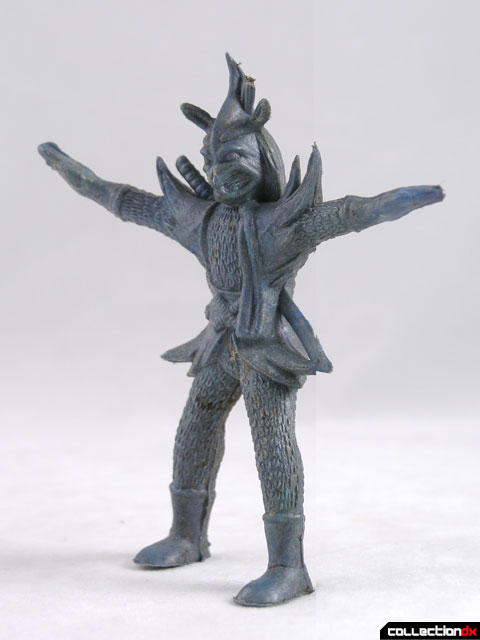 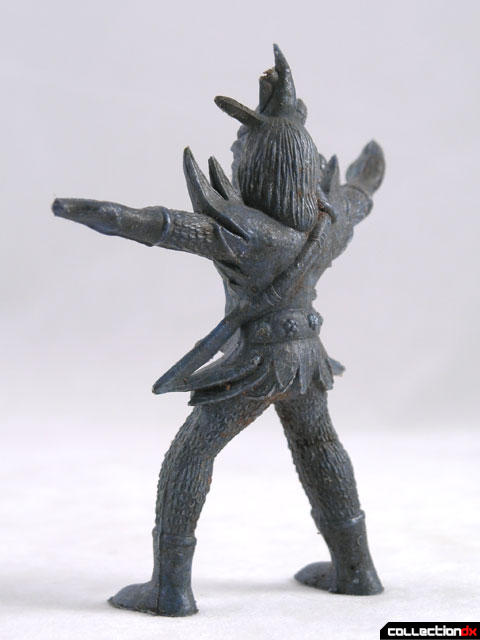 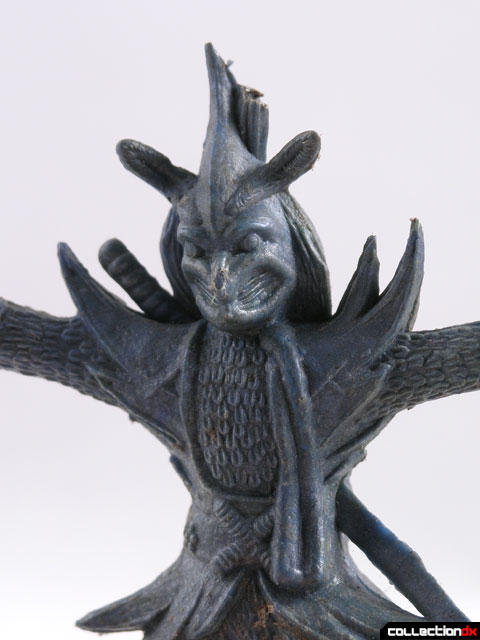 Ninja Arashi is an obscure choice here. The show must have been shown in Thailand, hence the need for a toy design. Ninja Arashi has hints of blue paint here and there, but I can’t be sure if it came that way. 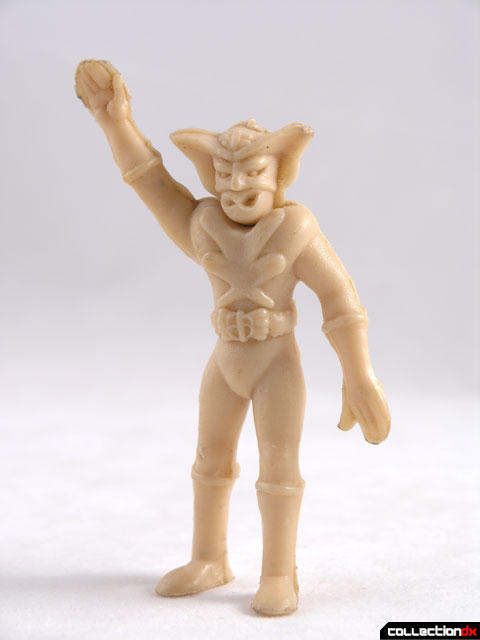 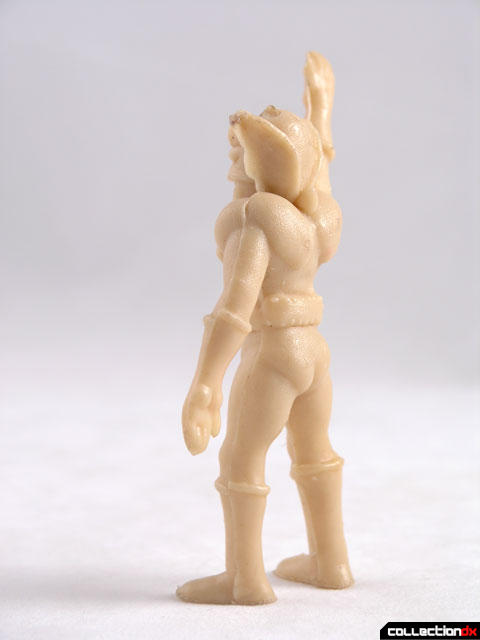 Barom-1 is the smallest figure of the lot at about 3 inches, and is also the ugliest. This design looks as if it was made out of play dough. It’s totally organic and has a ton of flash left over from the mold process.

One thing I noticed about all of these figures is the fighting stance. One arm up in the air and the other facing forward or out - I wonder if this is a cultural thing? Either way, these things are more folk art than toy. I wonder what other treasures await from Thailand?