Nothing fills me with glee like Star Wars. It has been a part of my life longer than robots, longer than my wife, longer than my children. Me and Darth, we've been kickin it old school... since 77. I was 4. FOUR YEARS OLD, and tonight, it ends. The saga I've been waiting to end ends May 19, coincidentally, one day before my 32nd birthday.

I still remember the Star Wars toys I had BEFORE I was even in school. I remember living on Beacon St in Lowell. We lived on the second floor, and I had a playroom, that had dark paneled walls. I remember very few of my toys, but I do remember my very first Star Wars toy - The Landspeeder. I didn't have any figures, I don't think. Just the speeder. I remember seeing the movie at a Drive-In, and falling in love instantly, although I don't remember the experience much. I DO remember that it was in my parents' red and white Volkswagen bus, the one without seatbelts and the hole in the floor. I remember having a mosquito coil heating up on the dashboard as we watched Luke and Darth duke it out.

So this Landspeeder, I broke it. I broke the center rear engine off the back. My Mom took it and put it up on the counter where I couldn't get it until my Dad could fix it. It had a sharp edge. It got broken and repaired a few times. I remember what the counter looked like. I remember the red vinyl on the back wall that was supposed to look like brick.

I don't know why these images stuck with me, but I think that's where my fascination with toys began.

Over the next few years, my parents were very generous with toys, for birthdays, Christmas, etc... I had a lot of Star Wars stuff. I got the Death Star while we lived on Wildwood Street, and maybe an X-Wing.

Empire came around and I was hanging around with a kid named Ricky. He was a bad influence. I remember walking down Thissel Ave with him, going into peoples mailboxes, looking for a TV guide that had the Empire Strikes Back on the cover. We found one and stole it. The guy caught us and yelled at us. We ran. We moved across the street sometime during this time, and again, we had a toy room, this time it was the cellar. It was a disaster. My parents would try things to get us to clean it, but we didn't care, I guess. I remember having Star Wars sheets, and sharing a bedroom with my sister. Empire brought a whole new batch of toys, including the AT-AT, the Rebel Troop Transport, the Hoth Playset with the cardboard AT-AT in the background, and I remember doing my first mail away... The weapons pack. This came with backpacks and grappling hooks and things like that... or was that during Jedi? I remember mailing away for the Emperor, and Admiral Ackbar. I remember going over Ricky's house, and although I had more Star Wars stuff than him, he had things I wanted. The Hoth playset that blew apart, among other things. This was good, because when you got all your shit together, you didn't have any of the same stuff, and there was no confusion as to who was whose. Little did I know what a thief he was to become.

I remember going camping with some other family at Gunstock, and some other kid from that family broke the head off of my Hoth Han Solo.

I remember watching TV and going insane over a "Making of" special for Revenge of the Jedi, which as we all know would become Return of the Jedi. This one, I remember seeing. I was full-tilt into Star Wars. And the toys kept coming. I had the AT-ST, the Rancor Monster, the Y-Wing, the B-wing, Speeder Bikes, cases and more. I had tons of figures. But it wasn't enough.

I remember stealing figures. It was easy. When you were playing from friends, you just could clean up and accidentally grab someone else's figure. I learned this from Rick. He did it to me. Eventually, I began to tear open the packages at stores and stuff them into my pockets. I only did this a few times, because I was scared shitless.

So Jedi came and went and I began to grow up. I got more into comic books and toys fell by the wayside. I heard from my friend (maybe Mike?) that there was a comic store in Lowell that would buy toys from you. This was maybe in 86? I sold 99% of my toys to this guy for about $40 in comics. What a fool I was. All I had left was the B-Wing fighter, that I sold to a friend, who still has it to this day, I believe.

So safely away from Star Wars I got into comics, then music, then skating, pretty much entrenched in everyday adolescent life. Presents for birthdays became gift certificates, or just cash, due to family problems. I wasn't getting presents anymore, and I kind of resented birthdays, because they reflected what was going on in my family.

Star Wars pretty much was out of my life until Lucas decided to re-release the movies. I saw them all in the theatre, and when I saw that they were putting out figures, I got every last one of them. I bought the red cards, the green cards, the holograms, short sabers, long sabers, every stupid variation. I spent several nights a week, hopping from Target to Wal-Mart to Toys R Us, searching for the rare figures. Eventually, I met my wife, and she was accepting of these habits. When the toys for Episode 1 came out, she waited in line when Toys R Us opened and fought off the sweaty crowds to get me one of each figure.

What the hell was I thinking? Subjecting my wife to this shit? I took a good long hard look at what I was doing. They toys weren't really that good. I had started to get back into Japanese toys, and the quality and engineering made these toys look like crap. I am too old to be hunting through toy stores for these things. Once Episode 1 toys came out, I abruptly stopped. I couldn't deal with the onslaught of new products. Rather than tone it down, I went cold turkey, and didn't buy another Star Wars toy.

Episode 2 came and went, and like each movie before, it fell on my birthday. But unlike Episode 1, there were no Star Wars toys. It was back to business as usual. I guess it was time to grow up. Growing up sucks. The movie was better than Episode 1, but still, it just whetted my appetite for Episode 3, which brings us here today.

I was walking around Toys R Us with my family the other day, and I was looking through the 40 plus figures already released and I thought to myself that I was glad I no longer have the compulsion to buy each and every one of them. It was like an addiction. What I am enjoying though, is experiencing Star Wars with my family. My son is 2 1/2 and has a Darth Vader costume. We run around the house and he pretends he is Darth Vader. He doesn't know anything about the convoluted mess Anakin's life became, he just sees what I saw at 4 - this cool evil looking guy with a light saber.

This is now what Star Wars is about for me.

I am excited about Star Wars again. 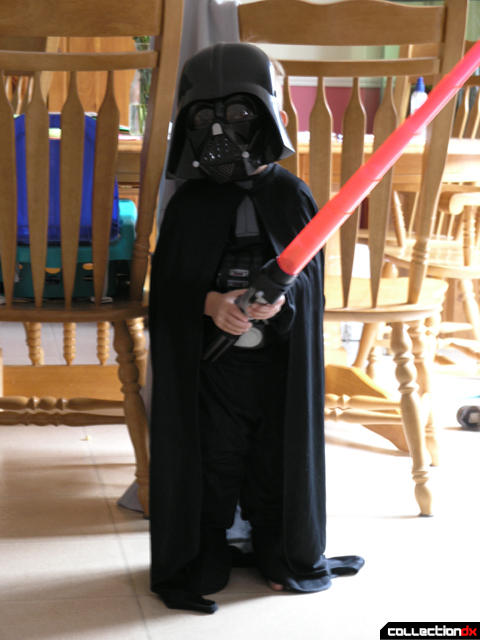