Bandai America had their booth on the floor of the Javitz center this year. Outside the booth stood an enormous fiberglass Megazord and also a giant Ben 10. Inside, we are greeted warmly. 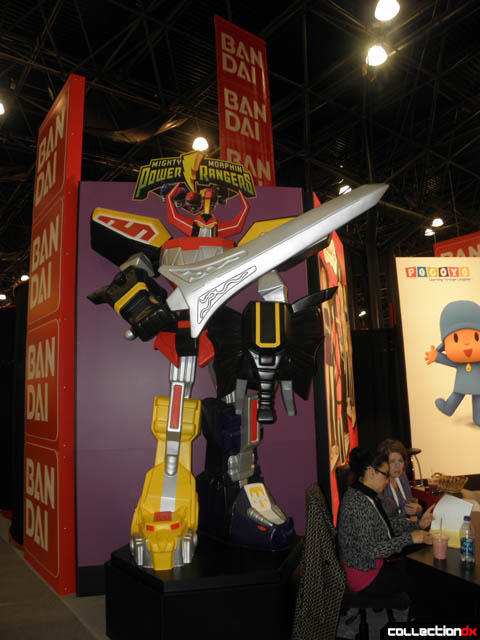 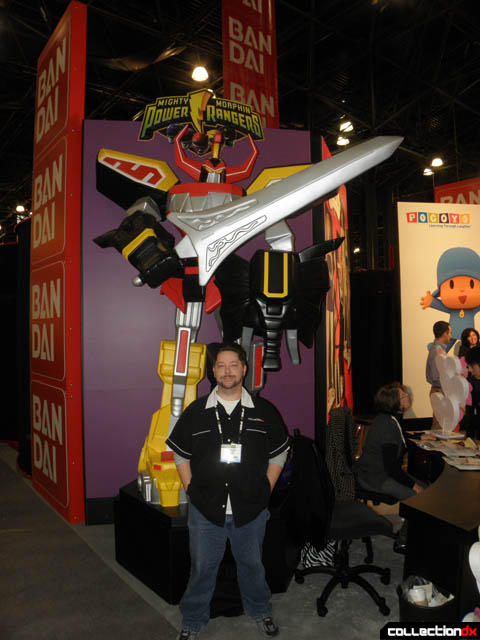 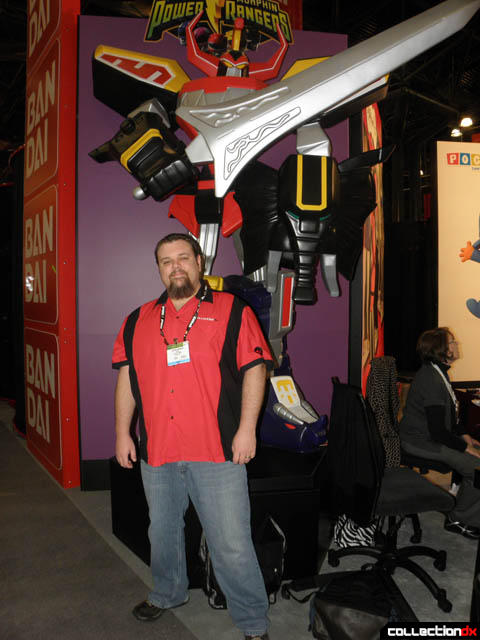 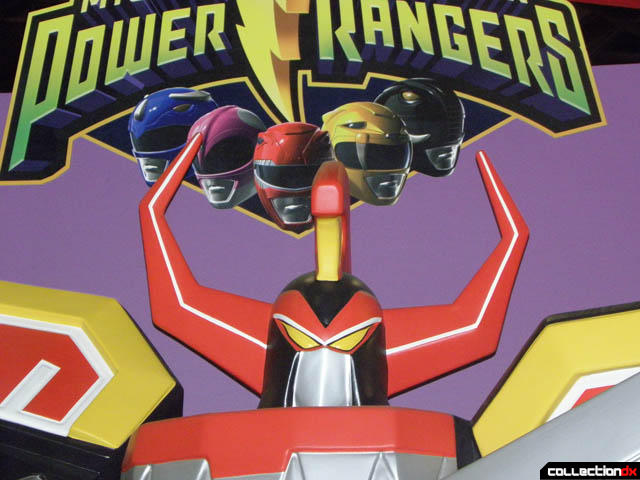 Gone are Kamen Rider toys. All that remains is Power Rangers and Ben 10. However, both lines are large and looking good. 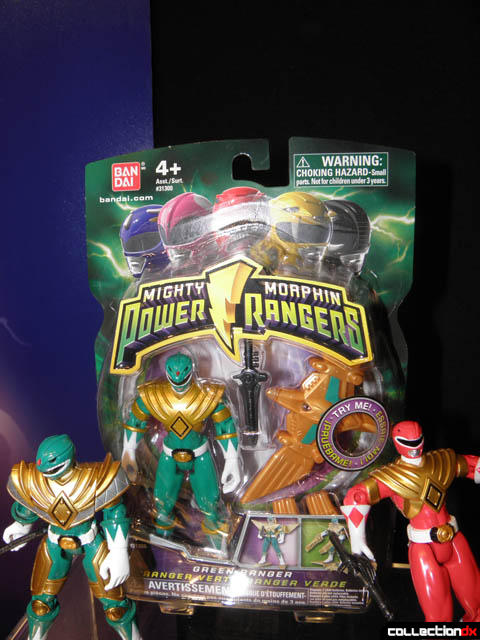 For Power Rangers, the renewed Mighty Morphin' line will continue through 2010 and beyond. Their top-seller was the retooled Deluxe Megazord. When asked about the Dragonzord, they said that the #1 request was for a Dragonzord. Bandai confirmed a Deluxe Dragonzord for some time in 2011. they said this Dragonzord will feature electronic lights, sound and motorized action. No idea what that action is, or if the Dragonzord will combine with the Megazord. 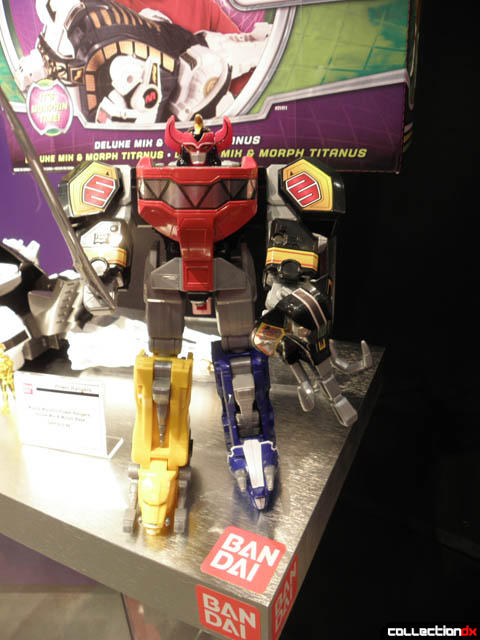 Titanus was on display, however, it does not appear to integrate with the previously released Megazord. This Titanus is one of those character builders where you can put arms and legs of mini characters into a tray and some mechanism puts them all together. Still, Titanus looks good, and is a nice modern representation for the shelf. 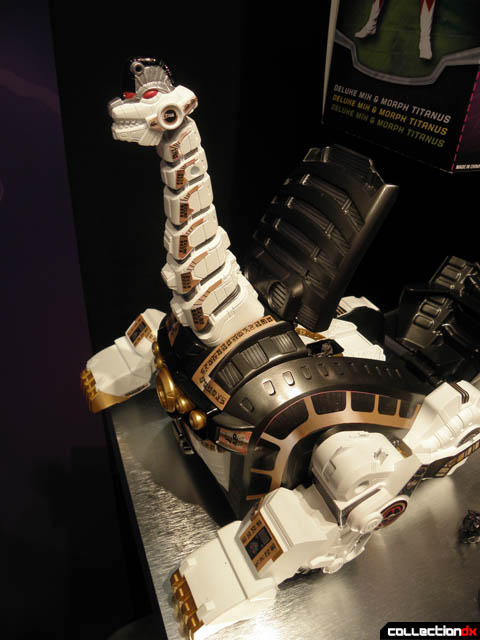 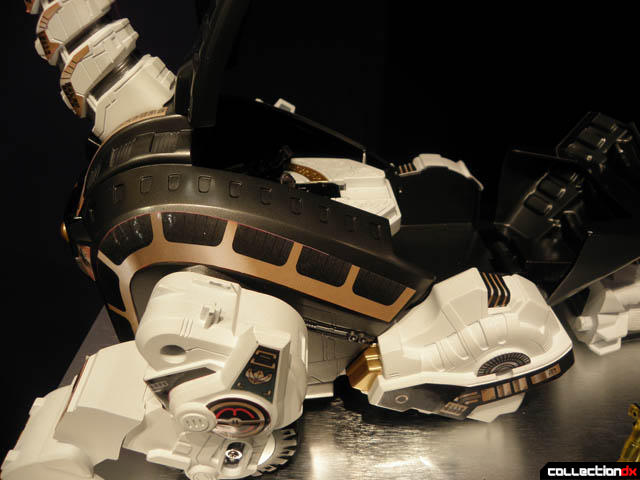 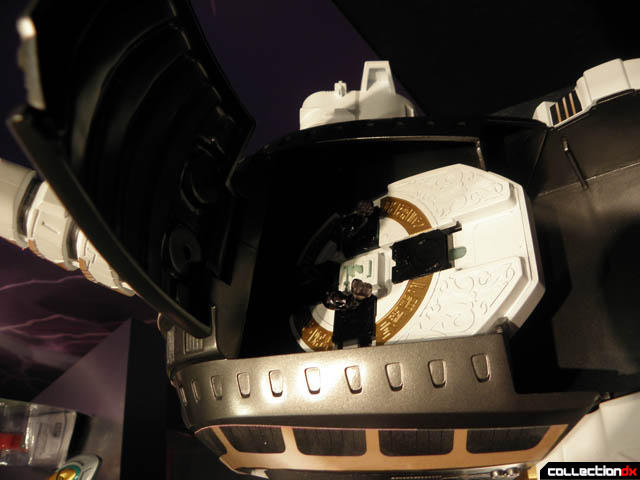 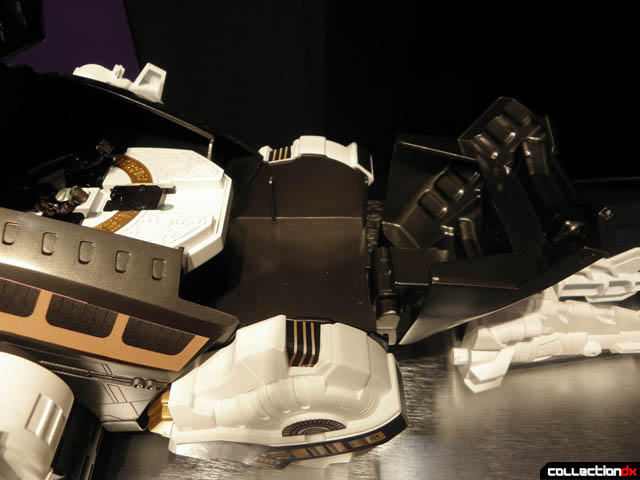 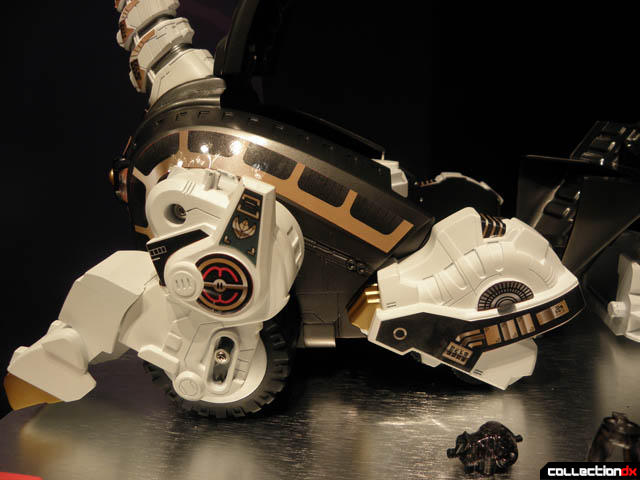 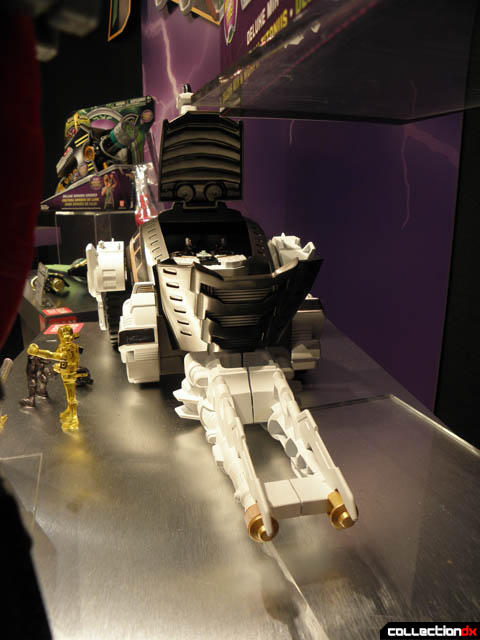 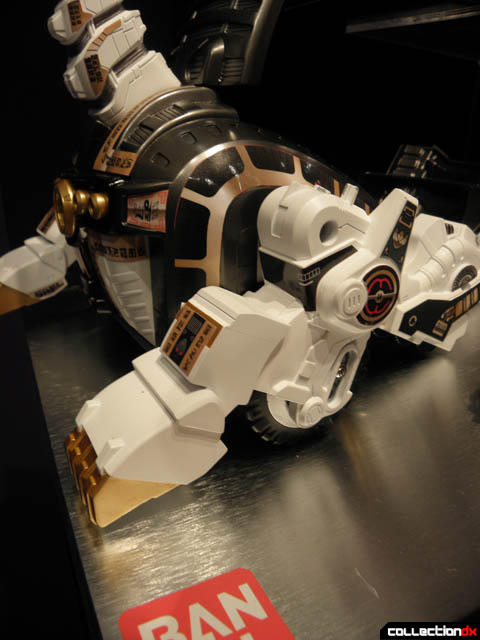 Other Power Ranger goods on display were the new action figures, figures that transform into morphers, and cool mini-figures. 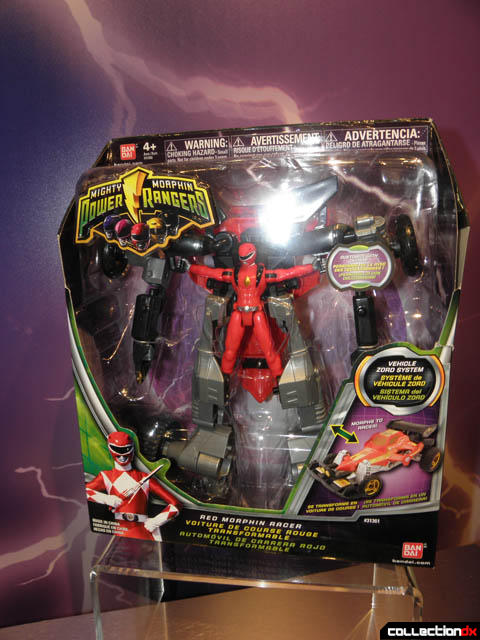 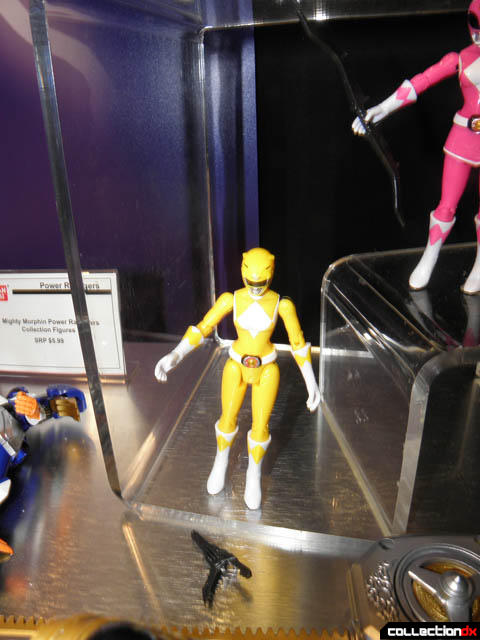 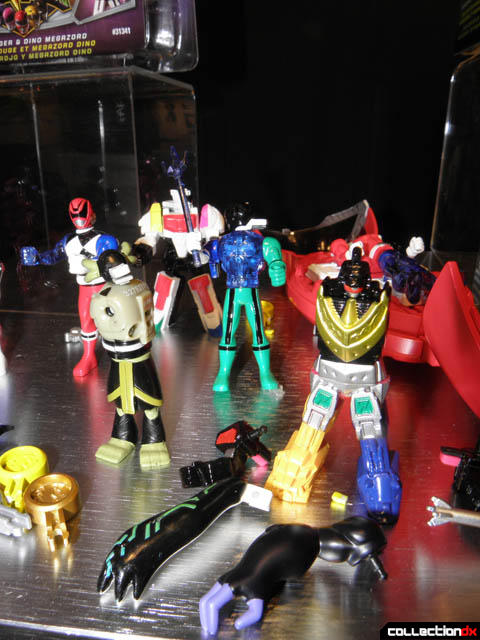 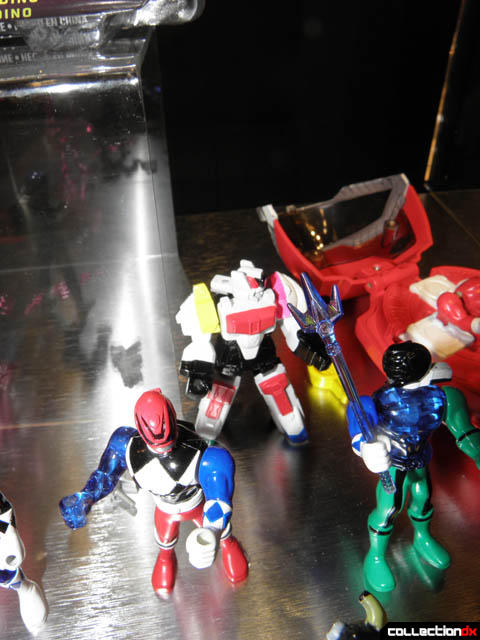 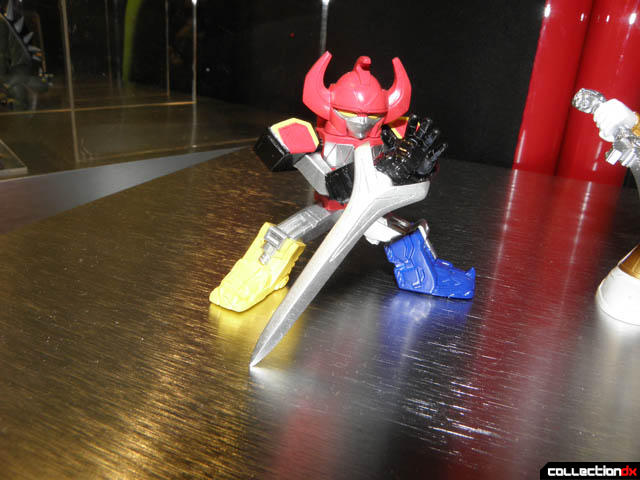 Role play was there as well. This Green Ranger Dragon Flute has electronic lights and sounds, as well as an extending blade that glows. 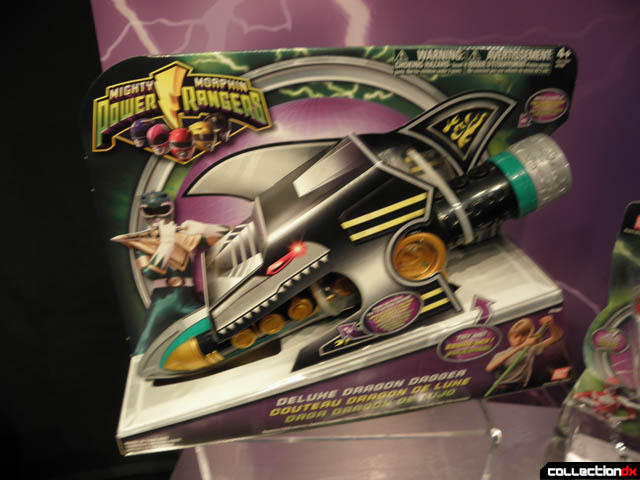 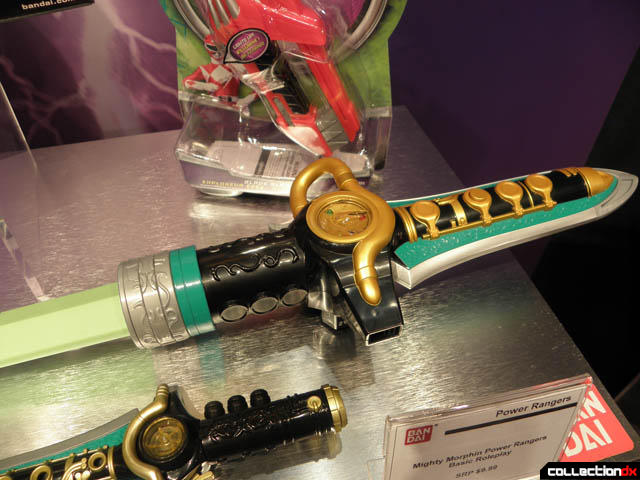 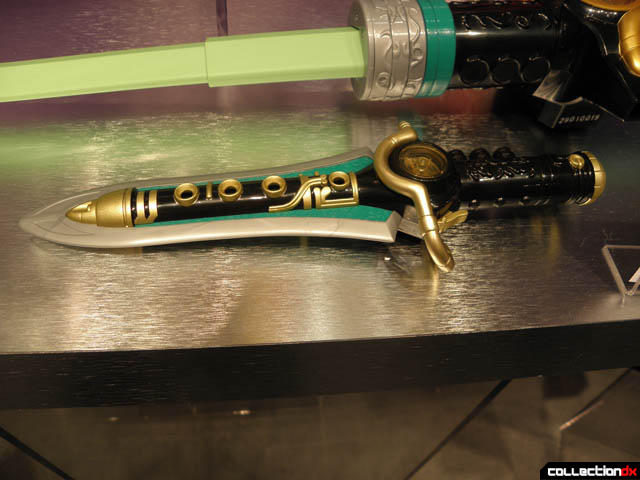 If you've read this far, I have a special treat for you. When talking to the Bandai reps about the future line, they said that the plan is to move back to the Japanese series, starting with Shinkenger, probably in 2012.

"starting with Shinkenger, probably in 2012."

They need two years to de-Japanify it.

Maybe I just don't know enough about Power Rangers,but what's the deal with those figures that have like the black chest,the red helmet,and the clear arms? can you switch around everybody's limbs?

you shove the little figures in the new Titanus and a mixed-up figure pops out.

I'm glad to hear that Shinkenger's gonna possibly come over here though, I enjoyed the show a lot.

Either it's me, or you can easily tell just from lloking at these things the quality of the plastic is cheap... Nice they are using stickers, something Hasbro abandoned years ago, but their quality is another thing...

Most of these are prototypes - the plastic quality is generally good.

Glad to see a Titanus release, of any kind. The original's integration with the Megazords wasn't the best, anyway, so I'm not too upset it doesn't combine. Best news of all is that Power Rangers isn't dead, but will continue in 2012. Thanks for the coverage!

Power Rangers isn't going to die & never will die because believe it or not...it's religious.

Can someone here translate the above post into Chinese letters? I want it as a tattoo.

"Can someone here translate the above post into Chinese letters? I want it as a tattoo."

It worked for Kwai-Chang Caine so go for it Grasshopper! :D

I'm trying to figure out how they can stretch the series long enough to not release the Dragonzord for a whole'nother year... I don't remember the show being *that* long...

Well, wasn't Dragonzord/Titanus part of Dairanger, not Zyuranger? I think they merged the series...no?

According to Wikipedia, Dairanger is where the White Ranger comes from, so the mecha in that one would be the Thunderzords and White Tigerzord. Titanius and the Dragonzord mate up with the original Megazord, so wouldn't they have to be from Zyu?

Dino megazord, titanus, and the dragon zord are from zyuranger.
The thunder zords, tiger zord, and tor are from Dairanger.
It's the reason we never got the Mega-Thunder-Dragon-Zord.

Darn, I honestly hoped that Shinkenger would be spared the Bandai America treatment.
I guess I have two years (three at the rate things take to reach the UK) to develop some sort of selective vision type technique and then just filter it out from my life.

Great coverage guys! But you should hear the "girls" on Rangerboard screeching about your Shinkenger news! Its pretty funny and pathetic at the same time! They also can't believe Titanus won't accommodate the Megazord! Oh, Lord you give them eyes, but they cannot see!

make sure they carefully read "it does not appear to integrate with the previously released megazord."

It just looks like it wont fit. Doesn't mean its a fact. It's still a prototype on display.

Watching the video, I'm glad to hear that the Dragonzord will combine with the Megazord. I hope it does not only the full combo but the one that use three of the other Zords to make Dragonzord in fighting mode.

I was ready to buy the new megazord, but looking at it on the shelf in person brought my toy boner to a noodly torpor. They seemed to have elongated his design so he's a little taller and sleeker, which is not what I like in robot toys. The shade of grey that they use for recesses is an eyesore, and the plastic is shoddy-looking. People buying this should expect a cheap product obviously made with the goal of saving as much money as possible.

Don't forget about it's ability to limb-swap with those awesome Ranger-scaled motorcycles!

Titanus could have been a glorious rebirth. They could have improved him, but instead they decided to sump out this joke. His plastic looks cheap. Like a big fast food toy. This is ball cider out of a pusbottle.

Again, BA's ability to take an awesome toy and magically make it crap never ceases to amaze me...

The only thing here that I might get is the lightsaber Dragon Dagger... which is also cheap. Why? Why, because it becomes a lightsaber, of course!