Home » threeA » NYTF2014: Interview with Ashley Wood from 3A

NYTF2014: Interview with Ashley Wood from 3A

Join Josh Bernard as he chats with Ashley Wood, the creative mind behind the 3A toy lines.

A very big thanks to our very own Prometheum5 for transcribing this interview for us! 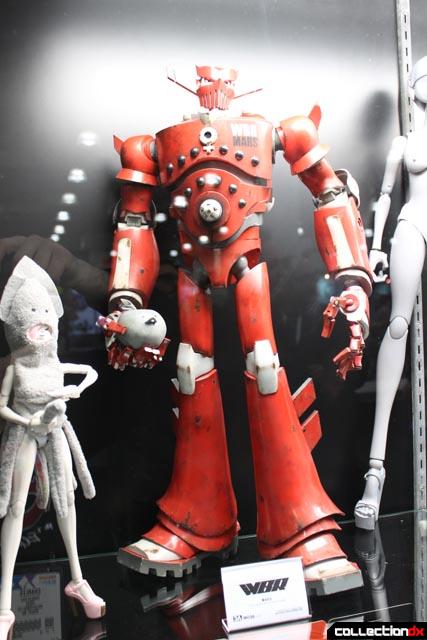 A: They come in cheap, man.

J: What is that going to run for? Six bills, seven bills?

A: Nah, you know, the whole idea is when I made the first design it couldn’t support it, it was too heavy.  So, the idea is to make as much out of vinyl to keep the cost down.  If it was all ABS it’d have a prohibitive cost.  So, we’re still working on, trying to see engineering-wise what can be vinyl.  The molded vinyl means cheaper cost.  I know what I would pay, I know there’s a price point.  Some of the stuff we sell, you’re like ‘wow, that’s expensive’.

J:  In the end, we’ve got giant robots on our business card.

J:  That’s right, I mean, I have the whole run of them, you know, the two foot tall ones.

A: And they’re [Mars] two foot tall right there, that’s the whole inspiration.  I couldn’t find a Dragun that was in good enough condition. 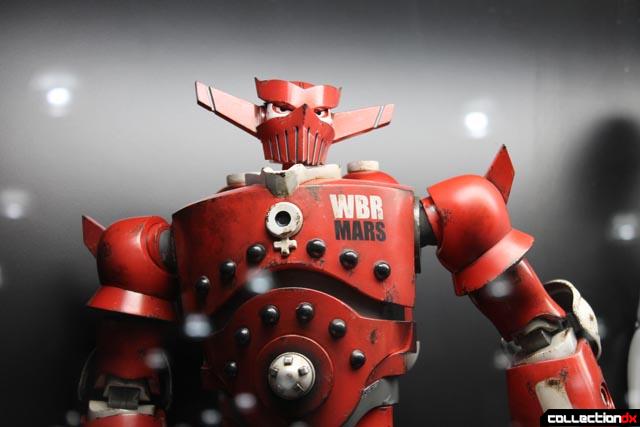 A: Alright. So that’s, he’s [Mars] my Dragun, but then as we were working it out, molding it and changing it, it turned into that.  The [belly missile] thing comes out, it’s spring loaded.  It’s great.  It will take an eye out, so we’re shipping it with an eye-patch just in case.

J: That’s awesome.  I love the articulated fingers going on.

A: He’s fully articulated, you can pose him any way you want to. 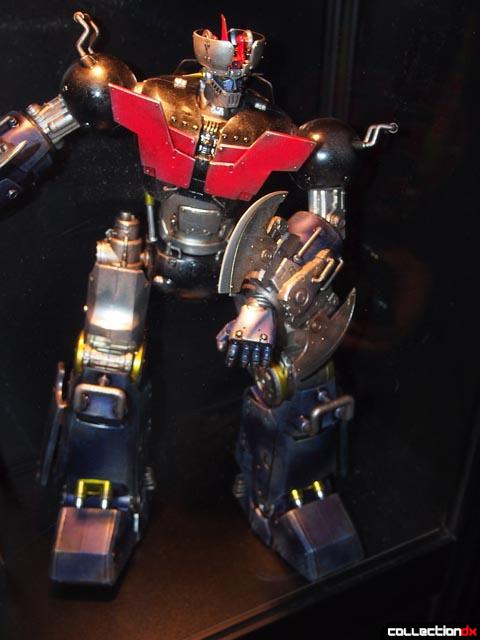 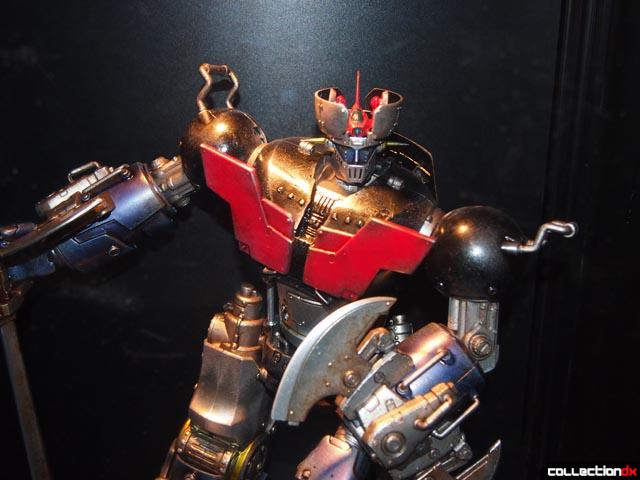 J: And you, obviously you’re not the guys that are doing the Mazinger, you’re not involved in that, but…

A: Well, we were originally going to do that, but I would have wanted to

J: You just want to do your own thing.

A: My Mazinger, I want to do my way, but their [ThreeZero] Mazinger’s good, too. 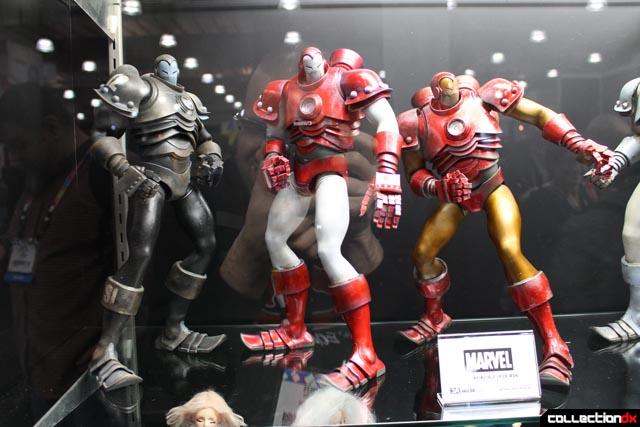 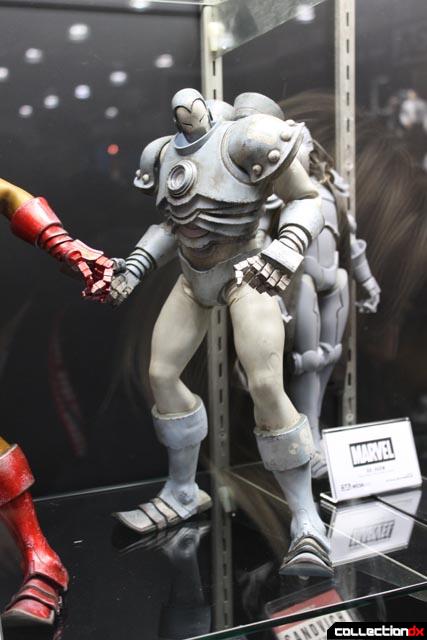 J:  [asking about the seamless joints on the new Iron Man figure]

J: But the outer skin is a rubber type skin, right?

J: Were there a lot of problems, because over time people have been having a lot of tearing.

A: Well, you can’t guarantee that, I mean you could make it Kevlar but it’s too strong.  You’re only paying $200.  Even though it’s three bills, it’s only $200.  If you want to buy an Audi as opposed to a Prius, it’s different.  I could make them last with a more expensive outer material that will not fail, but it’s going to be like $800,000.  It’s PVC, and that’s really strong.  Have you checked out our Halo figures?  Same thing and no one’s ever had a complaint.  I’ve never had any deterioration.

J: So how do you decide on characters?  Does Marvel come to you, or do you go to Marvel and say ‘These are my interpretations’ and now they’re going to let you do it?

A: I went to Marvel and I said ‘hey, your stuff’s shit, you guys want to let me do something?’  No, Marvel’s been great.  They gave full creative control, and we send the designs in and they just…

J: Now, is Evenfall one of your ideas? 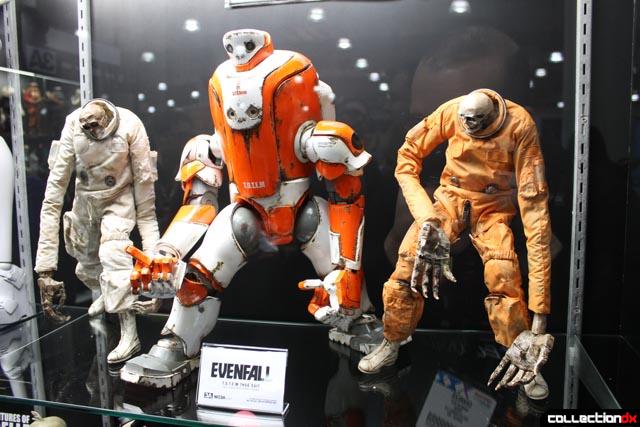 J: This [TOTEM Thug Suit] is phenomenal.  I love the World War Robot stuff, but I don’t see any, well some over there.

A: I don’t want to rely on that.  I don’t want to be the guy who just… that line’s great, I love it, but you’ve got to evolve.  I don’t want to just keep doing the same things.  We’ll do it, we’ve got like five or six big toys for this year, but you need new stuff.  Even if stuff is popular.  Tomorrow Kings are very popular, but that’s not what I’m focused on.  I want to make new stuff.  To me, this [Evenfall] is my new World War Robot in my world, because I know what it goes into, but you guys don’t really see it, but it’s just as many cool characters that, if you like WWR, this is very similar.  It has an actual antagonist, it’s very simple.  It’s like The X-Files with battlesuits and creatures.

J: Do you think you’ll do the two scales in this line as well?

A: Well, the model kits are just me jacking off because I love model kits and I want to make them.  They don’t sell for shit.  You’d think at that price they’d do kinda okay, they don’t.  To make a model kit’s like $40,000 per mold, and you have to sell… I think it’ll be a few years before we’ve paid them off, but they’re done because it’s fun.  There’ll be a Zero-G, we’ve got a 1/6 of it.  The final one has a pilot in it.

J: Obviously it’ll just be a torso and a head.

A: Yeah, you have to compromise that look, the silhouette, if you will.

J: Uh-huh, you could never get a guy’s arm in there, you know.

A: It’s like, that’s the beauty of design, that I’m not making a realistic suit.  It’s not Michael Crichton.  It’s kind of cool the way we’re doing it, where the way the reflectors on the arms are in there, but I don’t want to compromise the look at all.  Kim really wants to have a full figure in there, but then I’d have to change the groin, change the shoulders… I can sell the pilot, if people want the pilot separate.

J: And then you can have it standing there, just stand it separate.

J: That’s what they do for the Maschinen Krieger stuff, they have the plugs for the torso.

A: You’ve got to suspend, you know, disbelief.  This is fantasy.

J: Yeah, there’s a term called ‘real robot’ where things have to be mechanically accurate. 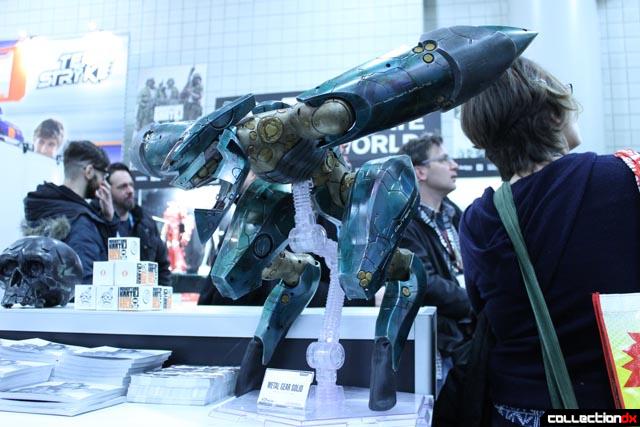 A: I don’t subscribe to that.  I have a friend, Yoji Shinkawa, you know the Metal Gear, he designs them.  He’s all into actuators, servos, we have this debate: is it all about the silhouette, how cool it looks, or how realistic it would be.  He’s more realistic, he likes to get the engineering, like what the stress would be, so look at his designs.  He’s got very heavy legs, light top.  He really cares about that, where I’m all into the look.  I’d rather move beyond that, because I’m not restricted by it.  I’m not making real suits, real mechanics.  I was just talking to someone, I come from an engineering background.  My father and his family, they make mining… and Ingersoll-Rand, make diggers and mining equipment around the world, so that’s where my background is.  I know engineering and machines.  I know how everything would work, but it’s like…

J: You don’t have to show every little bit. 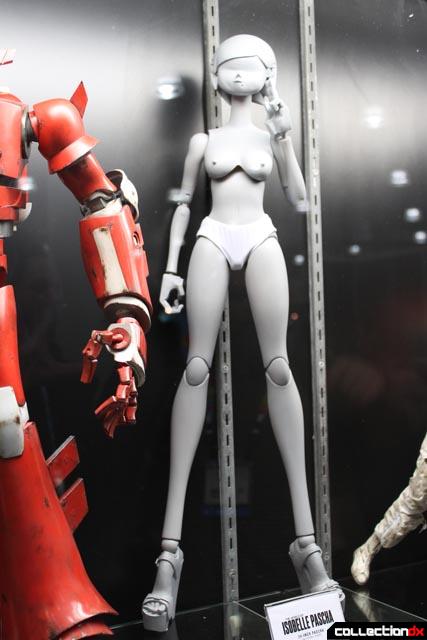 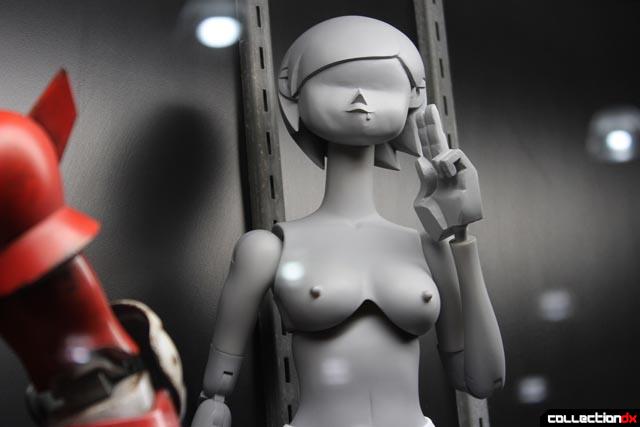 J: Now, will she have any shooting features?

A: Haha, well.  I was going to, I thought it’d be great to have a realistic vagina you could shove shit in.  I think that’d be great.  But then my wife, even at that point, because this is all her characters.  She was like, ‘I dunno, that’s creepy’.  Plus, people with a small finger…

J: You think people would buy it for the wrong reason.

A: There’s no wrong reason, that’s the beauty of these.  If you buy it because you’re getting off on it, great, get off on it.  If you’re buying it because you just like action figures, well, Action Mannequin, that’s my new term, Action Mannequin.  I’m going to sell the figure once, and then only sell the clothing.  So you don’t buy the figures, you buy the bear suit, or the squid suit, or the dress, or superhero cosplay.  So you’ve got your mannequin and you pose it, put it in different clothes.  Hopefully people make their own.  I want the shoes to be, the shoes will be all leather and buckles, as realistic as possible.  This gives people, maybe a platform to be creative on, paint on it, give her tats.  I’m sure there’s some pretty creative people out there.  I love that thing.

Check out the full 3A gallery from Toy Fair by clicking this link!

2 comments posted
check this out

Awesome!! RED(Mars) Robot!!
I need this