Our last appointment of Toy Fair was with Toynami. We love meeting with Toynami because it is obvious that they are such fans of Japanese toys, and are one of the few companies at toy fair that really "get" what we are all about. We often spend more time just going insane over toys in general, than talking about the current product line.

This is, unfortunately, what happened at Toy Fair.

The big news out of the Toynami camp is that the Toynami/Tamashii partnership is a done deal. Official. Signed, sealed, delivered. 2009 will bring lots of Bandai Tamashii product to the US, and many of the lines you love will be available domestically. 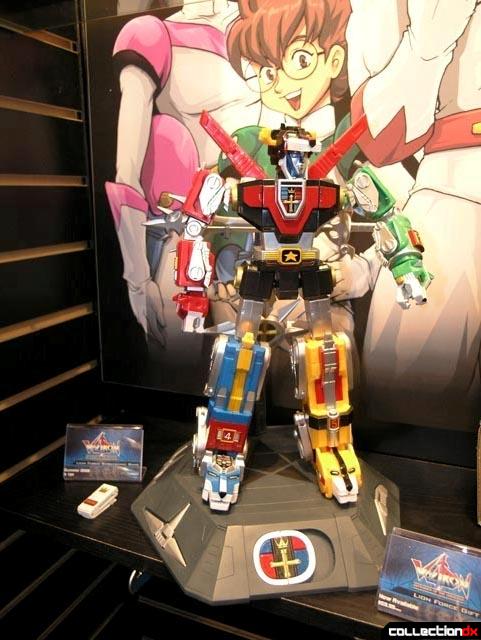 So here's the deal. Soul of Chogokin, Chogokin SPEC, Soul of Sofubi, Tamagoras, SIC, Robot Soul and others are definite. Bandai refers to Robot Soul as a "Revoltech Killer" and from the samples, we saw its obvious why. 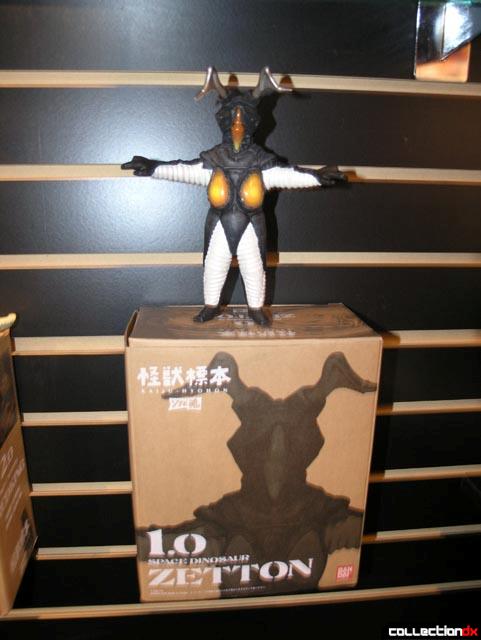 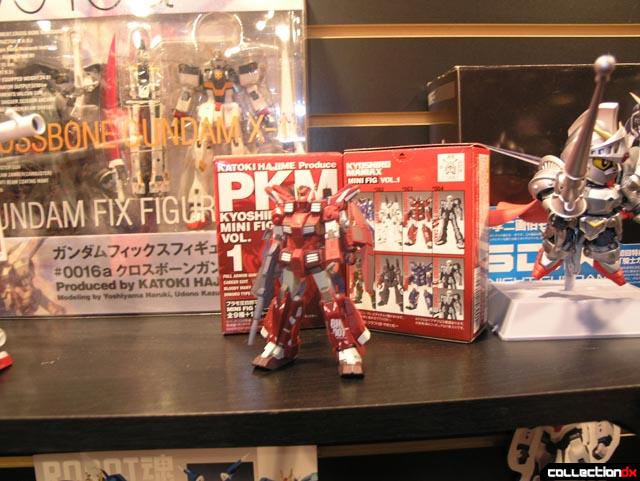 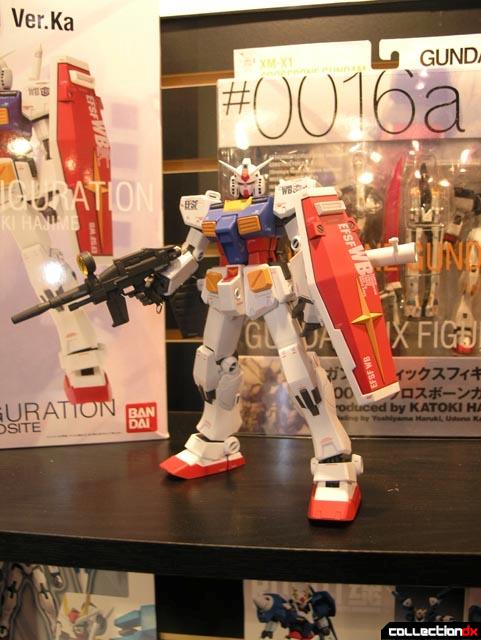 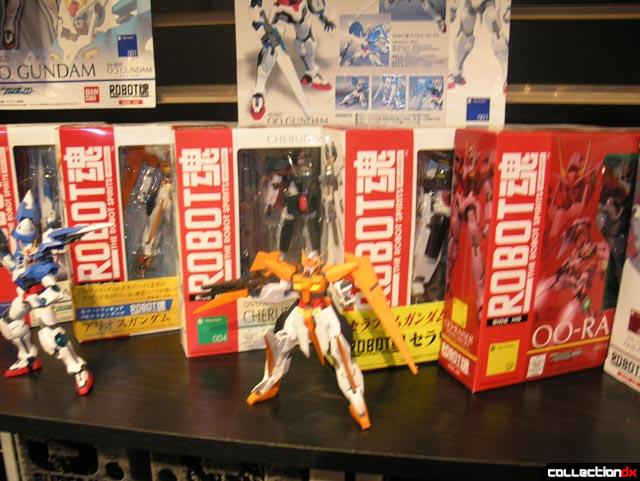 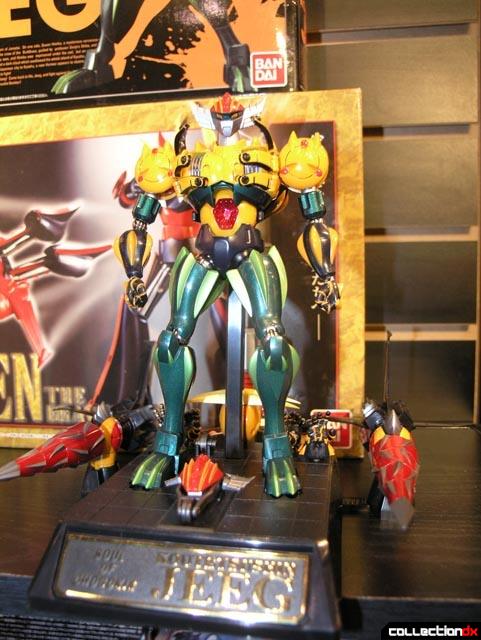 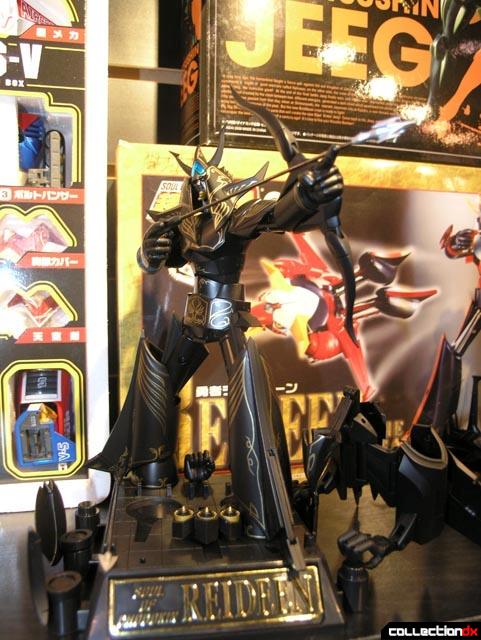 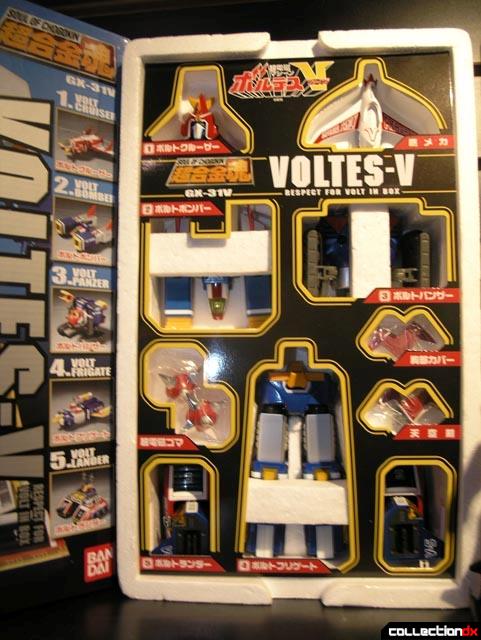 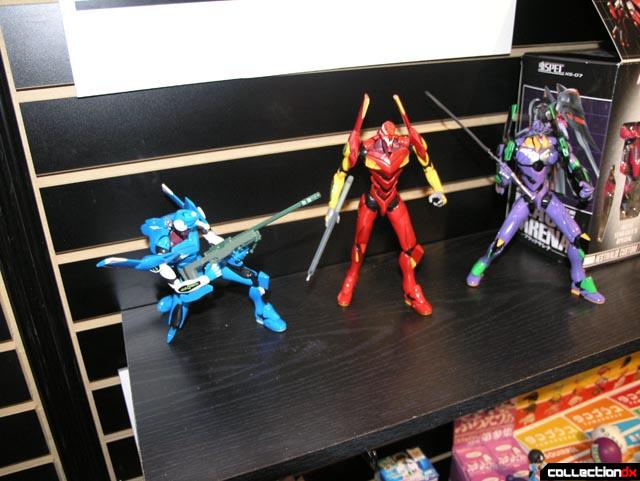 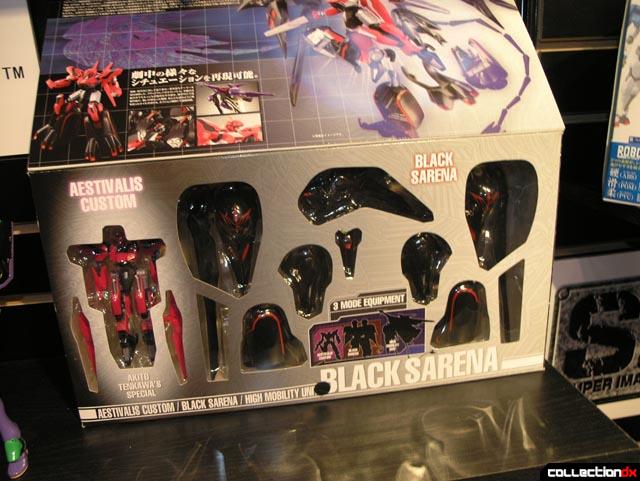 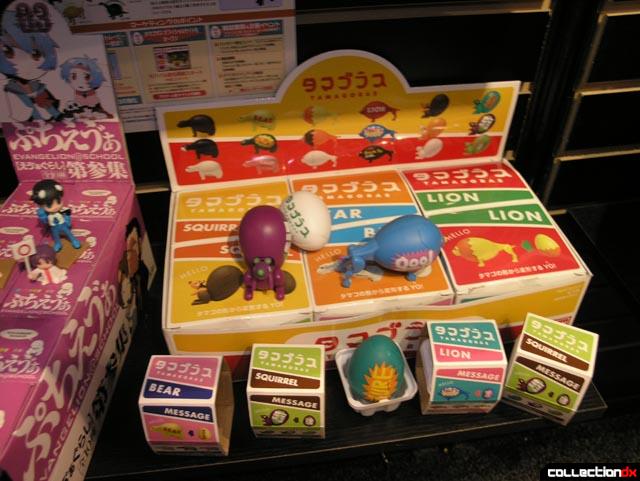 Also on display from the Bandai camp was SH Figurarts, Saint Cloth Myth, and Twist Action Form. These aren't guaranteed for the American market at this point, but you never know. 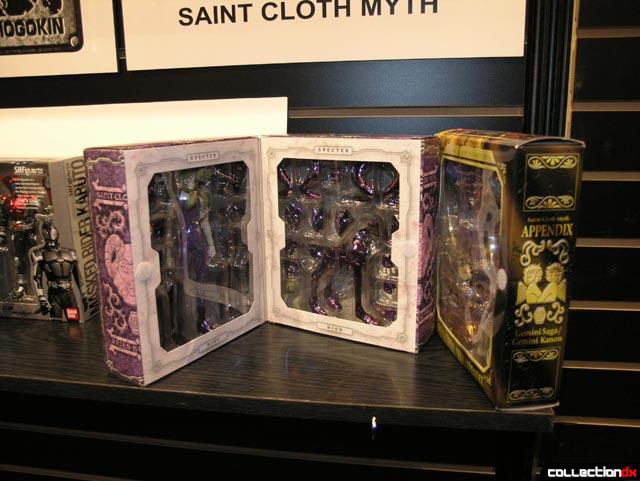 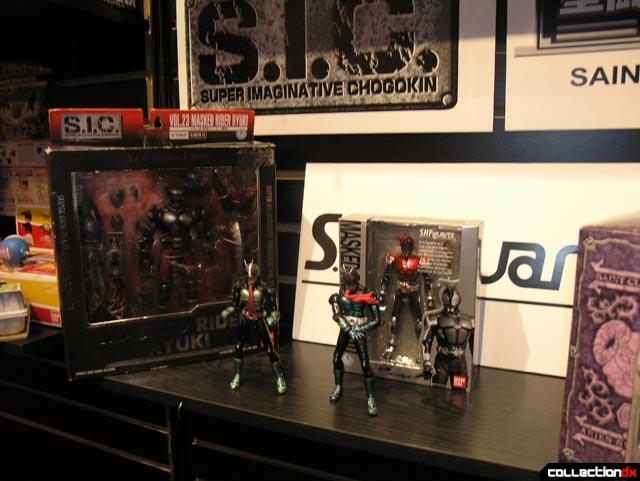 From the Toynami side of things they had the new Robotech Cyclone, which looks great, and is shipping now. All of the Beta fighters are on display and George said that the factory that did the Beta Fighters now have all the molds for the Alpha, and will tooling them from here on in. There is a possibility that we will see all plastic giftsets that include an alpha and beta in matching colors. 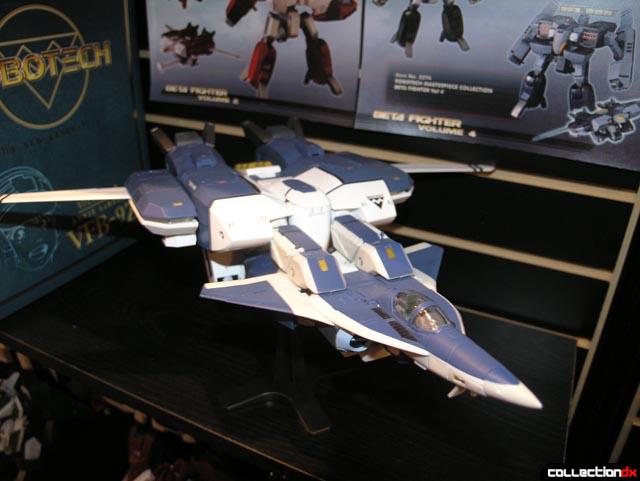 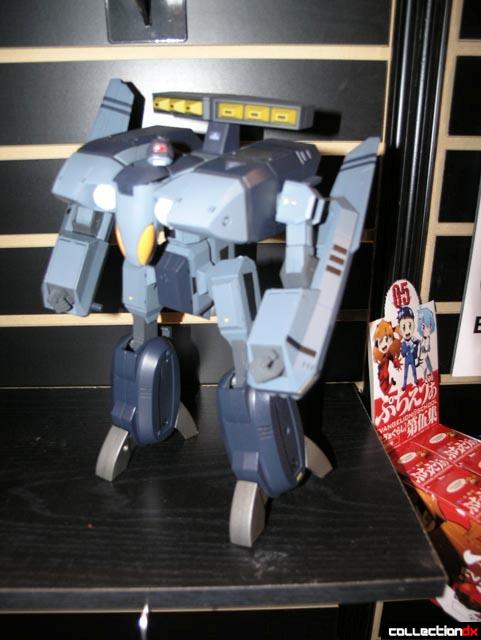 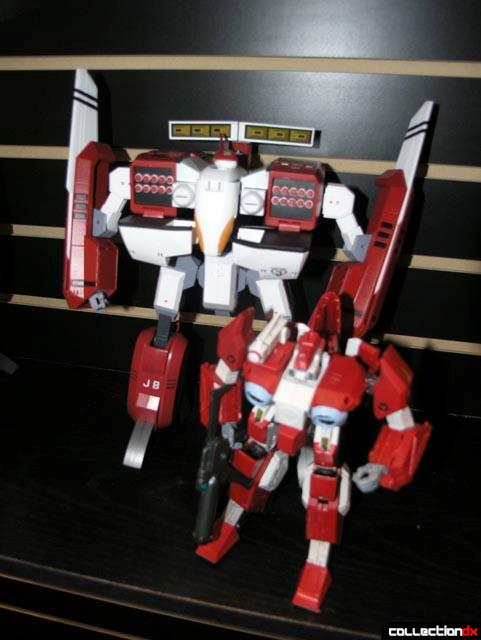 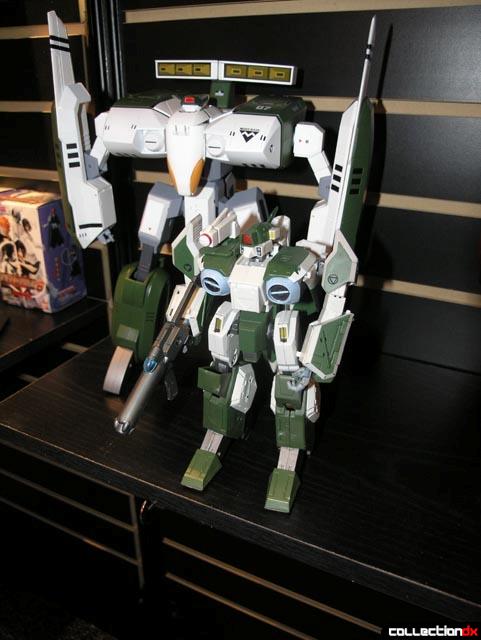 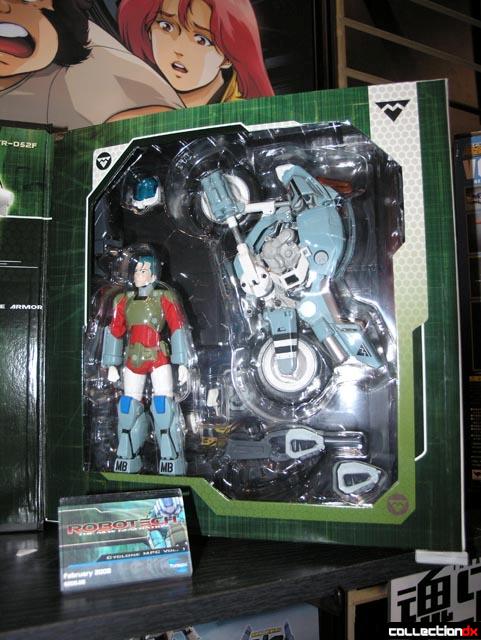 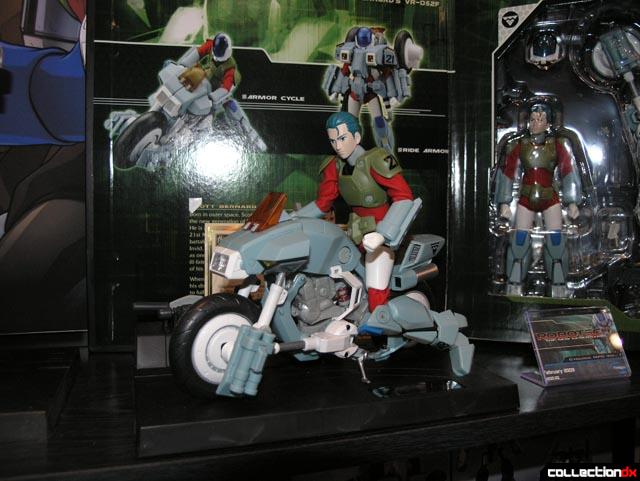 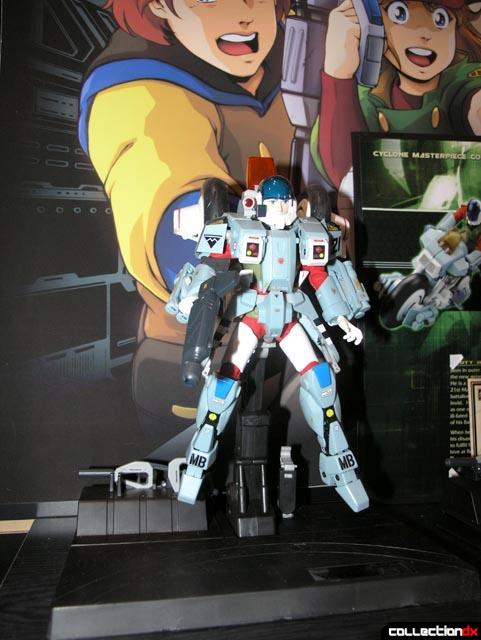 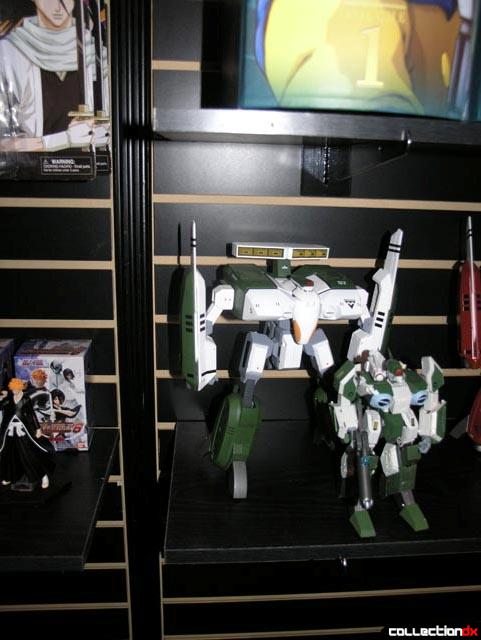 The 1/55 valkyries with the re-tooled heads are on hiatus, due to a licensing issue with Big West.

Toynami is throwing its hat into the vinyl game with a 9" vinyl Voltron, which looked very nice. When asked about the possibility of a vinyl Invid, George said "Maybe...." 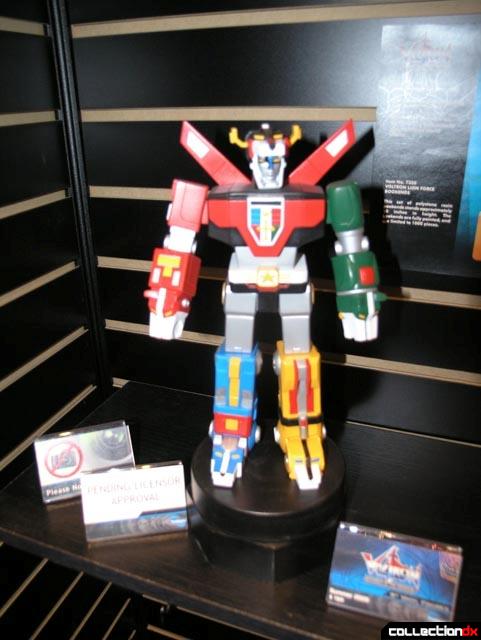 The plastic Voltron sets continue to sell like crazy. 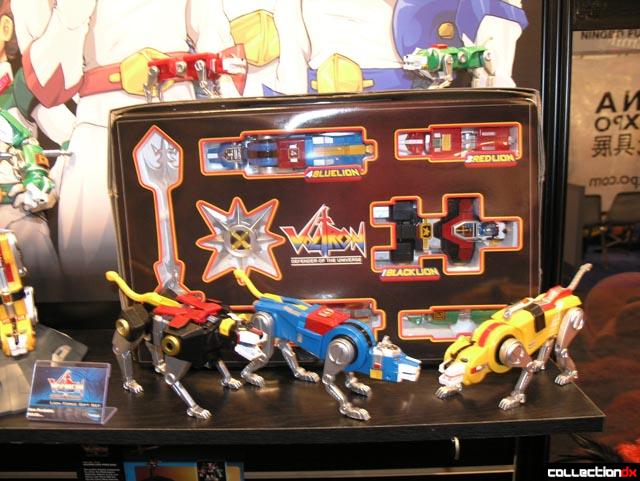 We were invited out to Japan at the end of the month to the Tamashii Nations event in Akihabara, and after about 30 seconds of deliberation, we accepted. So CollectionDX will be covering the event next month, live from Tokyo!

This is very cool news... Toynami is pretty hit or miss when left to their own devices, but as an importer for Bandai products they could do very well. I'd buy the Respect for Voltes SOC if I could pick it up for a reasonable price domestically.

What does that mean in terms of prices? Will Chogokins be cheaper once they're domesticize?

word on the street about this is a little bit cheaper for SOC in the US; better distribution for the main releases to US retailers, and continued Toynami/US exclusive versions like last years SDCC. The boxes it seems will be have Toynami sticker on them.

They're basically trying to do what Diamond tried to do for Bandai/SOC- bring it to the mainstream US collecting audience. Problem was with Diamond, they were a little bit more than everyone else, and they would get their stock a long, long time after it had hit eBay and Japan. By that point, everyone could find them cheaper through import stores or ebay, so few people bought them from Diamond.

A win/win for everyone outside china and japan, as many US stores will sell "US products" like this to UK and Europe for lower rates, so they win too.

Something that I forgot to mention to Josh is that during our interview at the NYTF 09 with Toynami, I was told this following info right from the horses mouth. The release of Bandai/Tamashii products will be simultaneous in the US and Japan. Furthermore, expect of up to 40% off of what you are currently paying from US and some HK retailers.

Toynami, I love you.

I know its a near death issue, but what does this mean for Gunpla? I know Kotobukiya had SRW kits on display at Toy Fair along with those awesome mechanical display bases, but they didn't say anything about US distribution, or maybe they did and I just didn't read the right lines. This shows FIX Figurations are coming, so thats some proof of Gundam making a come back to the US. I'm just a little worried though that if models come with them, that the price tag is going to be a kill switch again. 80$ for a 40$ model was only a purchase out of convenience once, and I've learned my lesson. Honestly I'm excited for this agreement (including Toynami's hint of a Alpha/Beta all-plastic edition ala their VOLTRON) but I feel like I'm still a part of a narrow portion of the US Bandai fan appeal. I know where I can get Gunpla, but it'd be nice to walk into a store locally and find the same thing at the same price but without the additional S/H.

I doubt we will see gundam kits as part of this deal as Gunpla isn't under the Tamashii banner.

This news is DOPE. Really cool to hear, even though I doubt they'll be able to do much about the steep prices (sorry, but new chogokin isn't that essential)On the other hand, I'm willing to bet that a new crop of collectors will emerge, thus fueling the secondary market for bottom feeders like myself. Have fun in Japan!

Hey there everyone, I'm D-kun. Been going on this site for well... years now! I figured it'd be about time that I come on here and actually make an account. I love this site, and all of the neat toys that it's shown me over the years, especially the Onell Designs toys.

Anyways, the announcement of the partnership with Tamashii and Toynami originally surprised me, but when I thought about it, it does make sense, since in terms of toys like SOCs and what not, the larger toys that Toynami makes like the Beta Fighter and what not are in a similar price range and size scale. I just hope this means it will be easier to get the Super Robot Wars Daizengar and Aussenseiter SOC when it comes out!

Is there any news on what what stores will actually carry these?

"The 1/55 valkyries with the re-tooled heads are on hiatus, due to a licensing issue with Big West."

Frig and damnation. ...All I want is a VF-1D, reissue style.

It's odd... In researching for my [upcoming] reviews of the 2008 Origin of Valkyrie line, I discovered that when Bandai acquired the 1/55s in 1984, they designed new heads for the VF-1S, -1D and -1J. While only the VF-1S's was produced (which my old 1990-reissue has, and is far better than the original Takatoku Toys' design), the -1J and -1D were prototyped at the same time but never released.

Hopefully we can order from our local comic shops through Diamond, avoid shipping costs and support local business.

Robot Soul won't be a Revoltech killer if they continue to rely on Gundam mecha from those horrible new shows. Revoltech did great for several reasons, but for me (and I'll bet most of you) the biggest was the variety of mecha, especially some of the ones that previously had few or no prior toys made.

At best it will a nice alternative to Revoltech for all the properties Bandai has a stranglehold on - mainly anything from Sunrise.

As for the Toynami/Bandai deal, it was all but a done deal at SDCC, so at least it's nice to know it didn't fall through.

While I'm excited at the news of possible SOC and other lines being available to places like BBTS and other places for much less. I'm worried that they may not perform as well as they want given the still largely unknown properties to "the masses". Combine that with our current times and I hope Bandai is willing to give it some time before calling it quits like Gundam.

Big West is Big West, they've earned their reputation as being uncooperative at times, mainly because they hold the keys to Macross and not much else.

I brought up that very same point about the Robot Soul line, that it was just Gundam. He reminded me about Code Geass and Eureka 7, so its clear other properties will be joining the line.

Also keep in mind that the Bandai we are talking about here is Bandai Japan, and is under a wholly different management structure than Bandai America.

Yeah, I'd have to agree with Duke on this one. The main appeal to me for Revoltechs is that I could get a cheap Macross valkyrie figure, and then also get a Getter-1 from the exact same line. It has a nice variety which I love.

I remember that about a year ago, Bandai had a poll out asking that if they were to expand their HCM-Pro line, what mechs would they like to see. I was looking forward to this, since one of the main answers was Tekkaman Blade figures. But that hasn't happened, and it looks like Bandai has decided to go with Robot Soul instead, which I haven't actually purchased. But to me it just seems like a glorified MSIA figure.

So were going to be able to get SIC and GFF, I also noticed the Figurats Kamens Riders.
This is great news, I was also wondering on the SOCs since there going to be cheaper are they going to chince on the diecast.

Also as someone else mentioned...the only place I can think of that Ive seen a few Toynami things is Toys R Us. Are they going to be the only ones to carry this stuff?
Cant wait to get some GFF, right now I only have Zeonography...I hope this includes zeonography.

SIC and Figuarts are tentative at this point. In regards to SOC diecast content - I don't think there any changes planned for the metal content. Same production run, different packaging.

I genuinely hope that SOC will be available for cheaper stateside, my only concern is if retailers will charge at the discounted rate also. Alas, I gotta ask round where will these be available in San Diego.

Black Raideen SOC is GORGEOUS! Must... have...