I hope you like G.I. Joe, because Hasbro is about the flood the toy aisle with toys.

There was a whole room dedicated to G.I. Joe at this year’s toy fair, packed wall to wall with toys. There was so much, I couldn’t possibly cover it all here, but what I will do is cover the highlights.

Why not watch some HD video first?

The big thing on display – and the best thing – was the new PIT playset. It’s a large vehicle, maybe 2 feet long and 18 inches tall that folds out into a massive playset. It’s really phenomenal. It has connection points for dozens of figures, electronic lights and sounds, hidden doors, collapsible walls, and so much more. 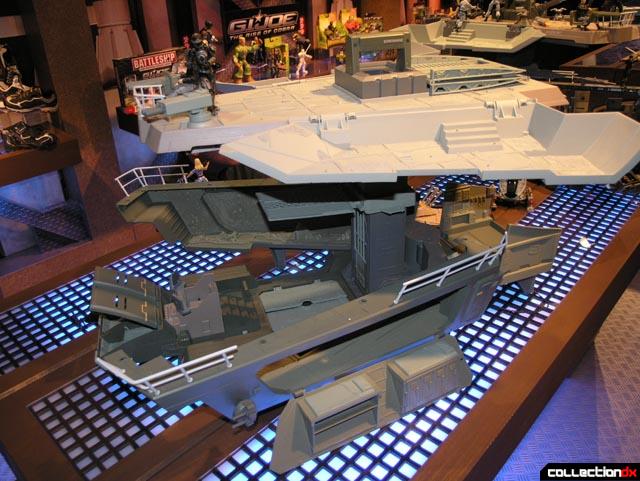 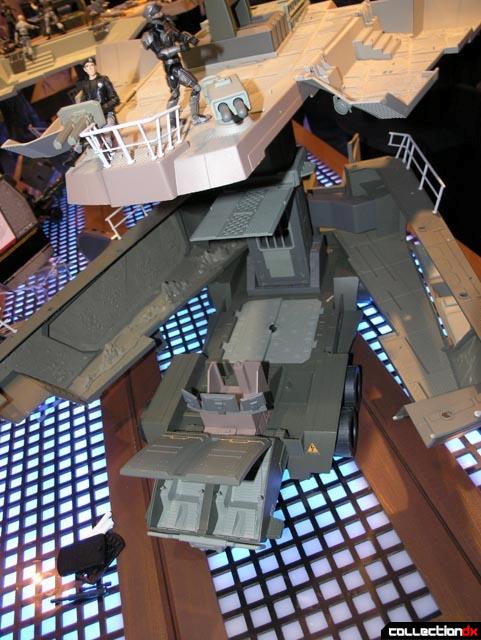 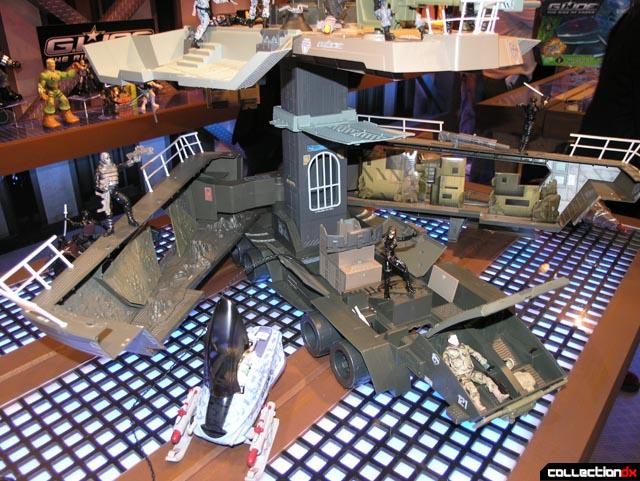 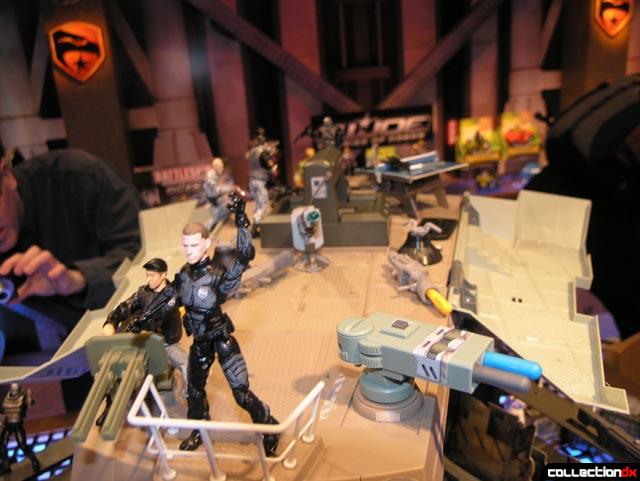 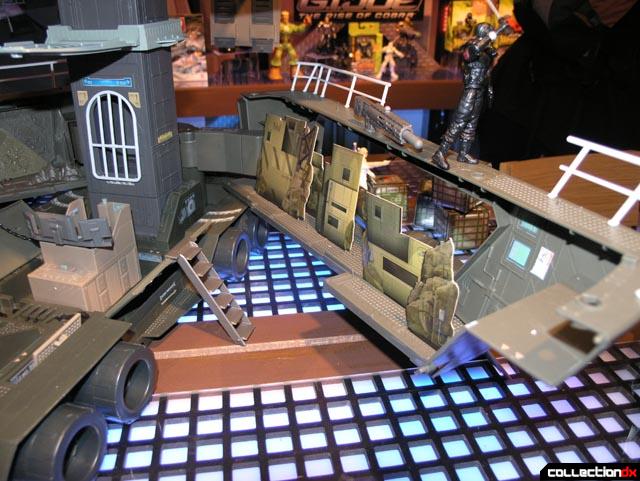 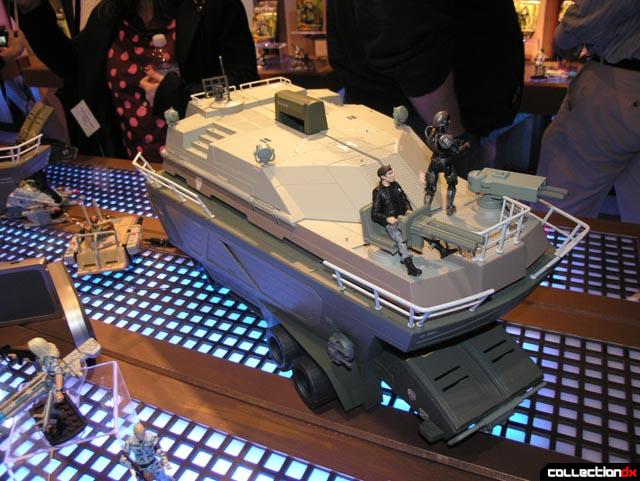 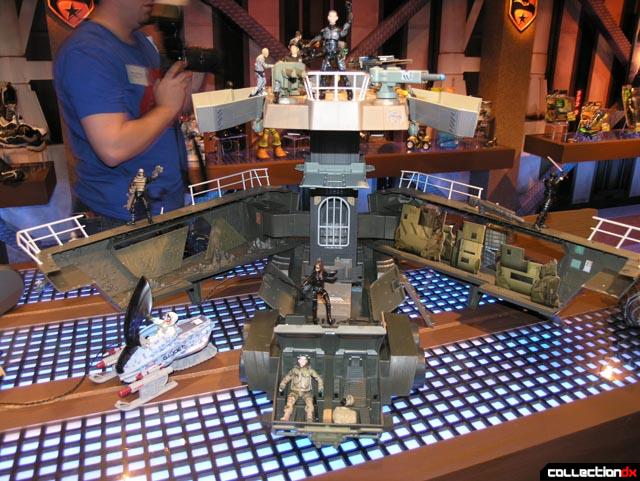 And if the set itself wasn’t cool enough – parts of the packing material are designed to be used around the base, one part even becomes a ping-pong table for the rec. room.

So yeah, the PIT is monumental. That will run you about $100

The next great thing I saw was the Night Raven. Based on the iconic jet from the 1980s and playing a big role in the upcoming movie, the COBRA NIGHT RAVEN comes fully loaded, with an array of engines, weapons, lights and sounds. The largest vehicle in the entire new G.I. JOE vehicle series, this jet also features a pump action “Lock and Load” system that readies the missiles for attack. Manning the controls in this ultimate G.I. JOE movie vehicle is a 3 3/4 inch Air-Viper figure. 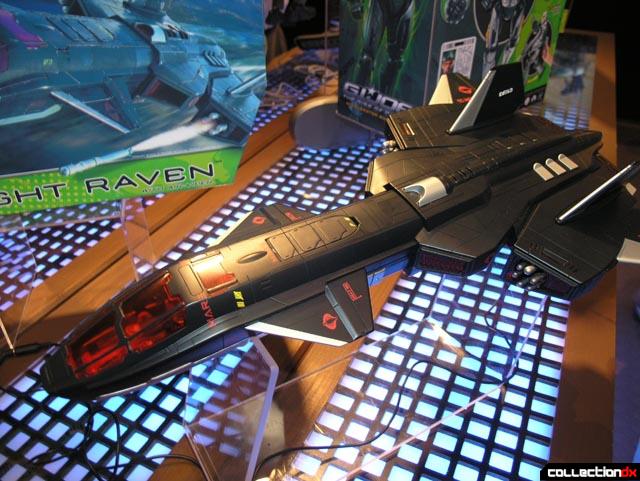 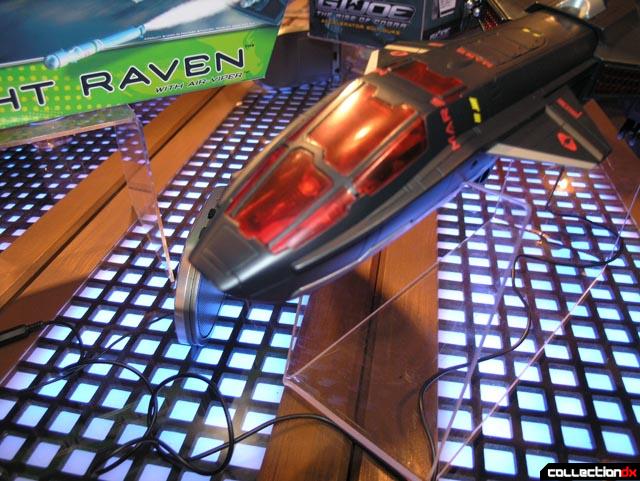 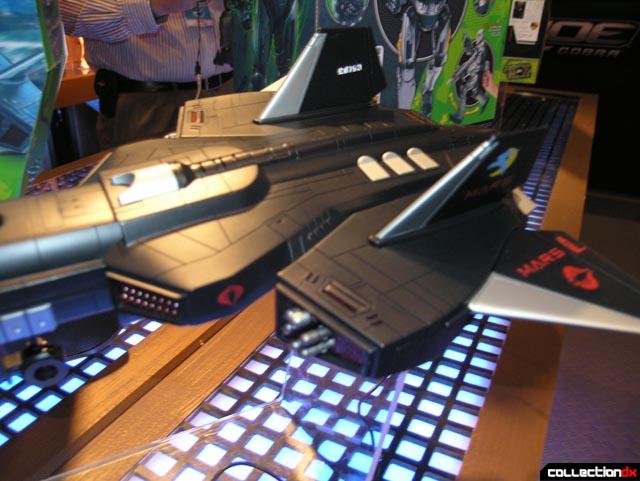 Looks frickin sweet, but a bit small for the $40 bucks you will drop on it. Welcome to the new economy.

Of course, in addition to the above mentioned, there will be dozens of figures and vehicles for sale over the summer, ranging from 3 3/4 scale to 12" scale. Role play and other stuff will also be made, but there is one inexplicable toy I want to point out.

The Movie Accelerator Suit Duke looks kind of like Robocop. Actually, he looks like one of those Chinese Robocop knock-offs that make annoying lights and sounds. He’s motorized, has a running feature and sophisticated electronics. And It will only set you back $70. In this economic climate, how can this possibly do well? Fans aren’t going to care about it, and parents will find it too expensive for the kids. 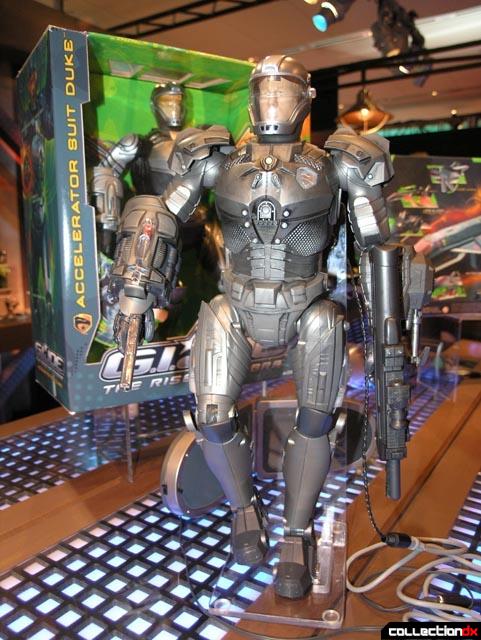 Still, If you are a Joe fan you won't likely be disappointed. Now you know all there is to know about Rise of the Cobra figures, and knowing is half the battle.

Man, Hollywood sure loves to 'wash em' black' when it come to adapting certain comics.

So my thought remains clear...Yuck, and I mean yuckety-smuckety. I've find it laughable that those guys ripped-off those uniforms from Metal Gear Soldier and that about sums it all up right there.

Not interested at all. And don't you DARE give that 'give em' a chance' rhetoric. I've been there and done that. I'm not planning on being humiliated again just like 2007.

Being a thirty-something bachelor isn't just all rehab and STDs, you still have to let the kids know they're #1 by dropping a killer toy once a year. That said, The PIT looks VERY 80's and has a functional utility modern playsets seem to lack. Not that there are many to choose from these days. Ah, the big fat 80's... As for the price nobody seems to complain about the sad sack Star Wars reissues like the AT-AT that I had to pay a hundred bucks for two years ago. At least here you can say that some effort went into it. I hope.

I remember when EVERYTHING was like the stuff we see here (although that robo-suit Duke is a very 1990s thing.) None of this "paint" stuff--it's either stickers or it's straight out of the mold. (Indeed, remember how the "feature" used to be that they gave you the sticker sheet and you put them on yourself?)