I want to thank George Sohn (President and Owner of Toynami) for taking the time to talk with us, set the record straight on a few things and for giving us a peek of things to come. George was very candid with us and it is clear from talking with him that he is a diehard collector with a lot of passion for the same shows and robots many of us do. I will leave the speculation and conjecture out of this article but if things shape up as planned it is going to be a VERY interesting year for Collectors and Toynami alike. Mark my words, you heard it here first. 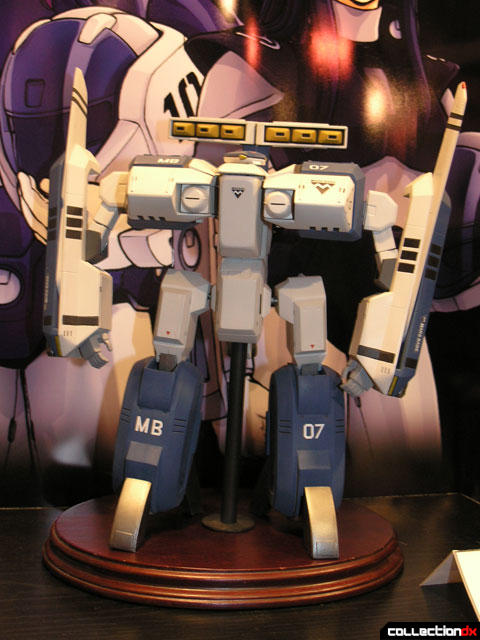 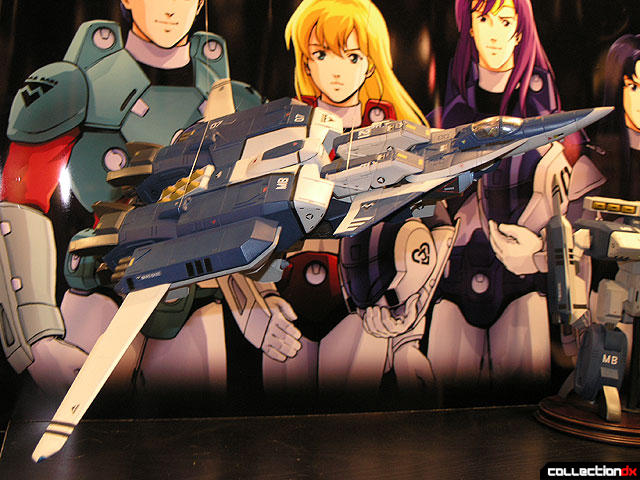 Yes, Toynami is still moving forward with their Beta fighter. The toy has already been tooled and is ready to go. We should see that Summer/Fall of 2008. 10,000 will be made in the different color schemes (not sure yet how many of each color yet) and expected retail cost is $150. 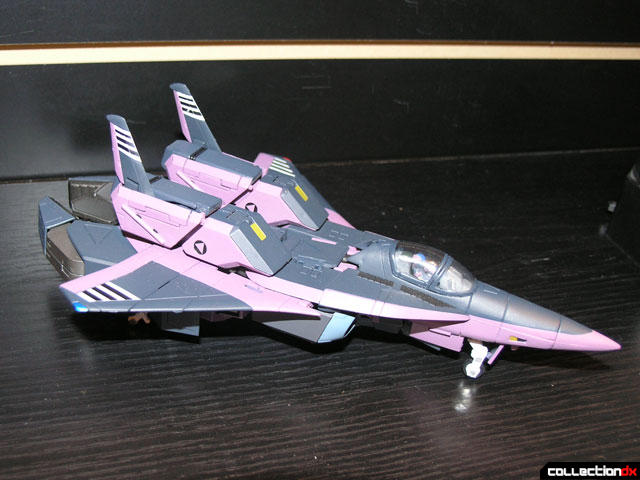 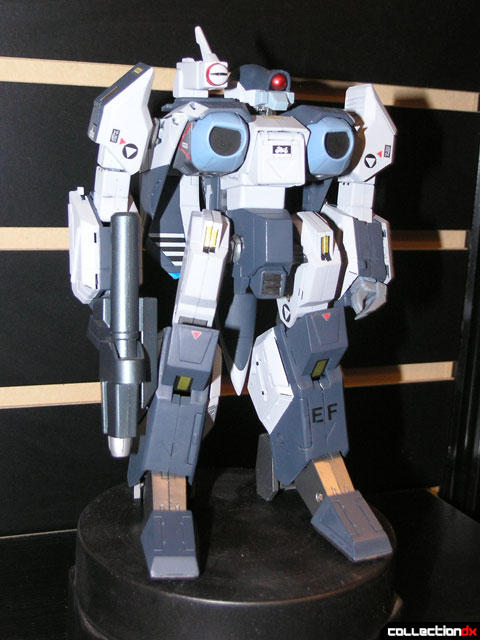 Two paint schemes will be released for the new shadow fighters, Maia Sterling’s black/purple style and Marcus Rush’s blue/black. We are told these will be out by Summer/Fall. No word on how many of each will be made. 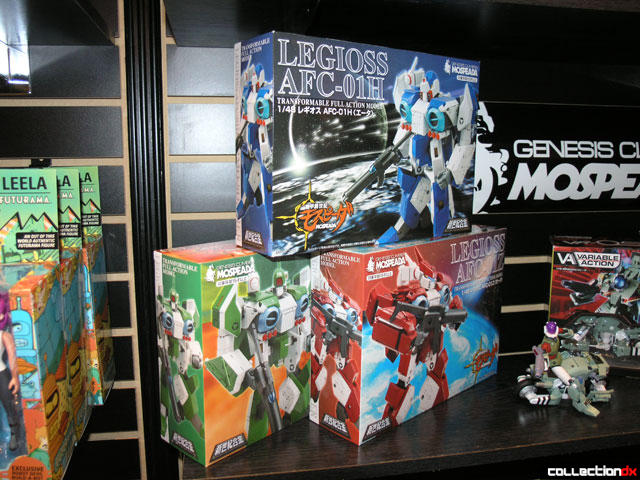 Of course, we did speak with George about the QC issues that plagued the Aoshima released versions of their mold of the Alpha fighter. The short version of the story - Aoshima borrowed Toynami's molds to manufacture the Legioss in Aoshima's factories. These were pushed out in a hurry to meet a deadline. Toynami is waiting for Aoshima to return the molds before they begin manufacturing the new Alpha fighters. Aoshima agreed to have the molds returned to Toynami by end of 2007 but Toynami is still waiting for some molds. 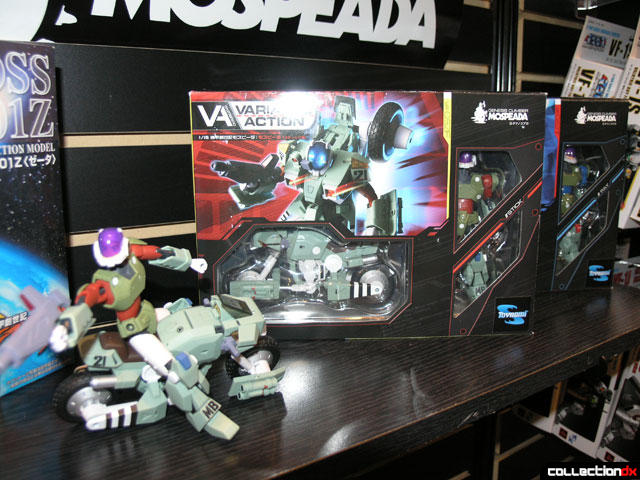 Cyclones! Lots and lots of Cyclones (or Ride Armor if you’re a Mospeada snob) coming out this year from different manufacturers. Toynami has been showing a larger scale transformable Cyclone for several years now but it has yet to see the light of day. Well, I can say that a large scale “Masterpiece” version by Toynami is due this summer. What is interesting and new news is Toynami is in negotiations with Beagle to produce the toy together. Beagle would release it in Japan with Toynami releasing it in the States. Both companies are deciding as I write this whether to use Beagle’s design or Toynami’s. George tells us they are very comparable to each other in form and function. 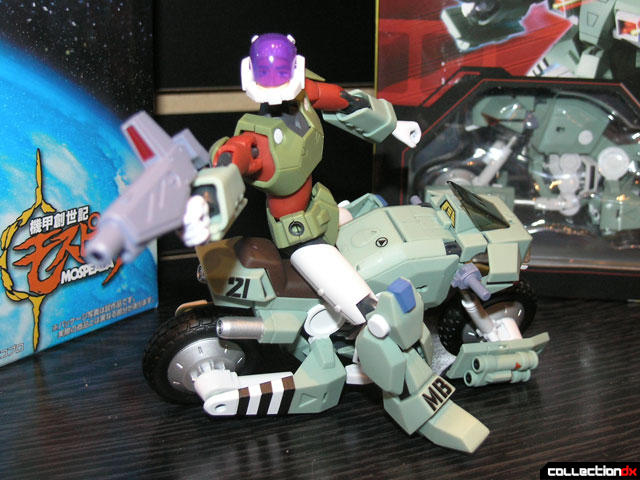 But that’s not all on the horizon for Cyclones from Toynami, as you can see from the pictures the smaller scaled Mega House version will be distributed by Toynami here in the states. These will be from the same manufacturing run as the Japanese counterparts but be placed in a repacked box. Nothing will be changed except adding the Toynami logo and changing Japanese to English on the box. We were told we can expect these in the States within weeks. 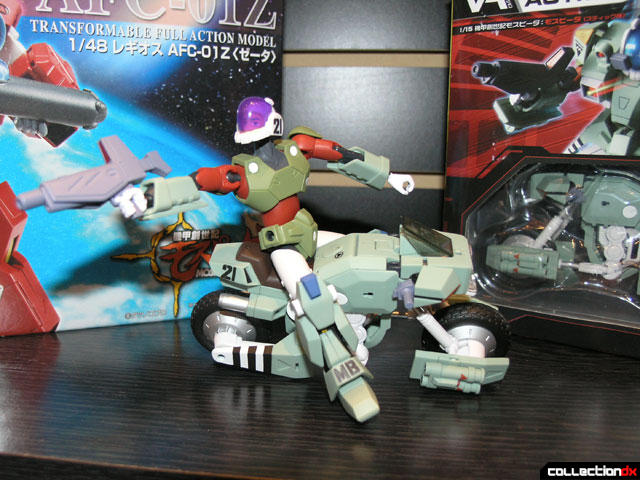 On a side note: I did get to handle the Mega House version and though it did feel light (to be expected) it looked fantastic and felt like a solid toy. I am looking forward to this release even more now. 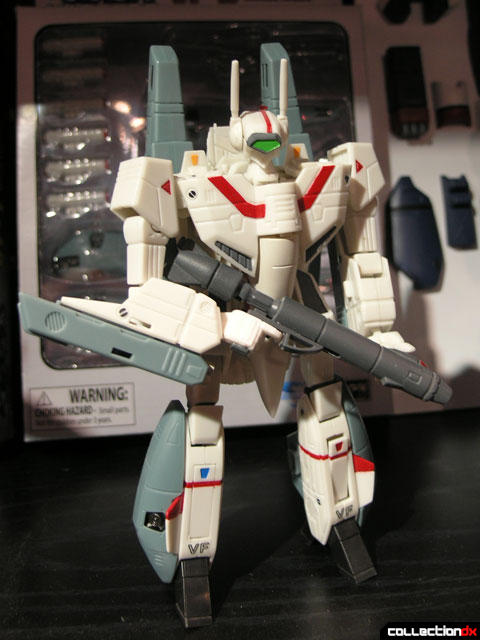 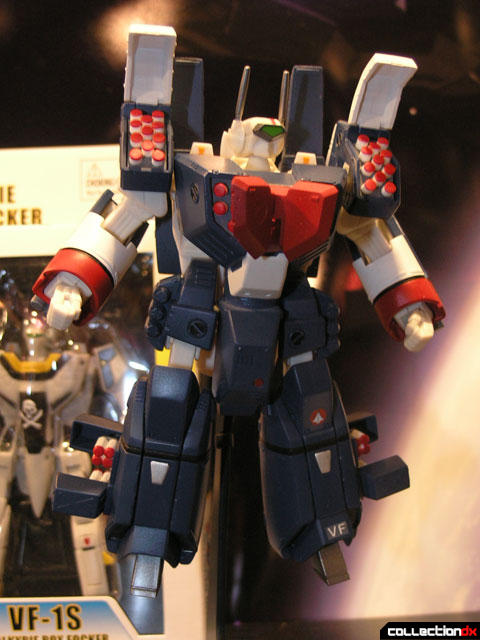 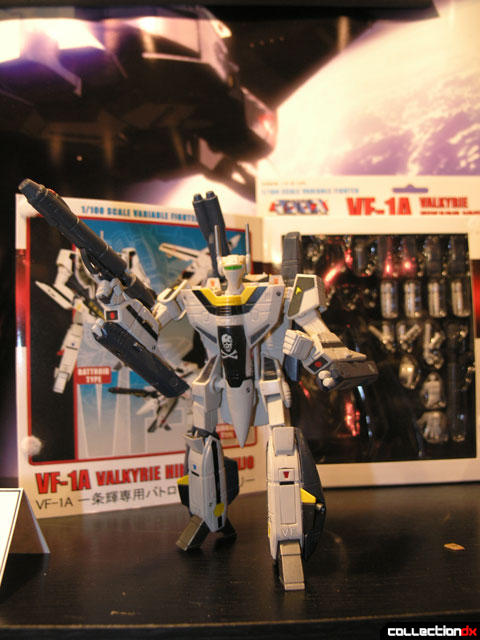 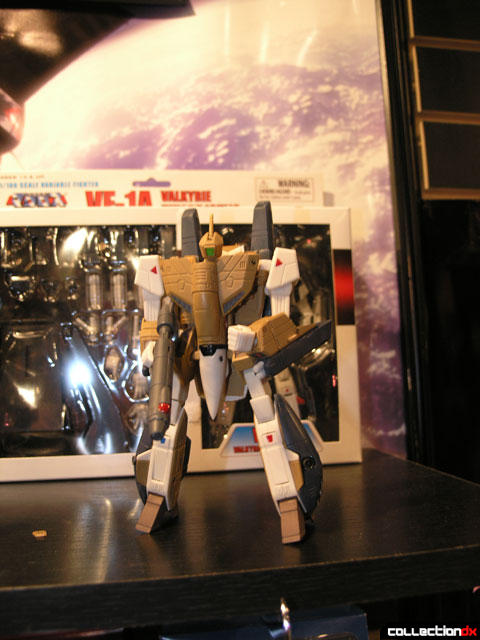 This summer, for those that invested in this line will be able to purchase Strike and Super armor for each previously released Valkyrie as well as newly packaged releases including both the Valkyrie and armor together. 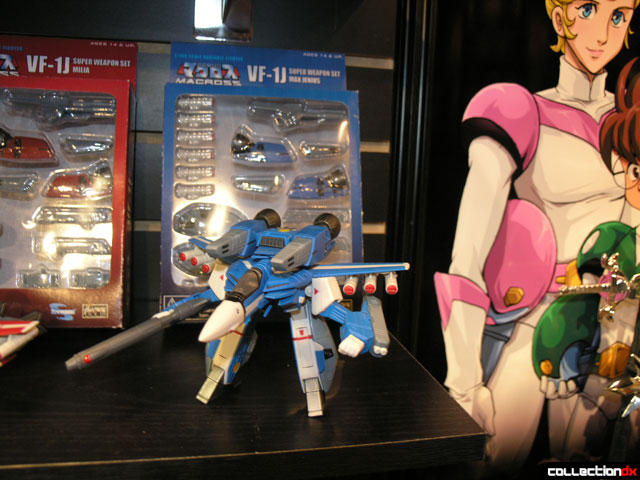 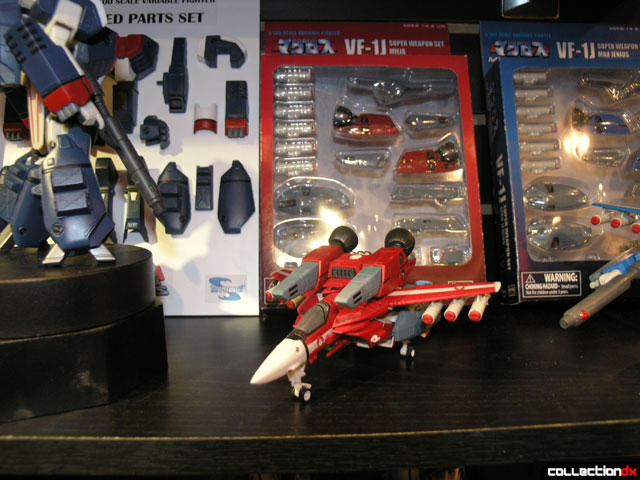 No new paint schemes were shown but they did have an armored VF-1J on display. I did not get specifics on its release (I would guess around the same time as Strike/Super armor.) 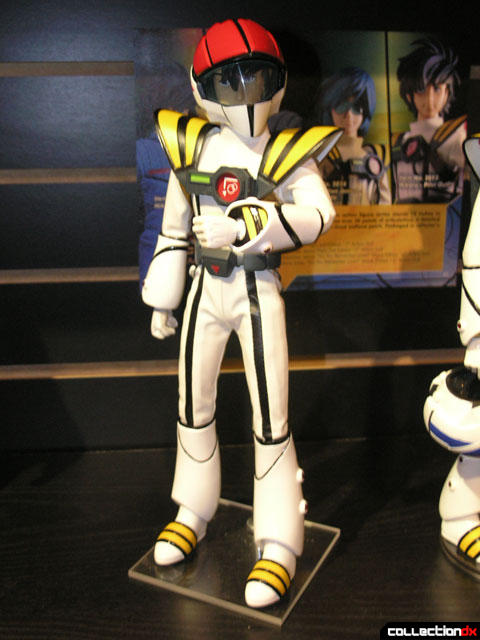 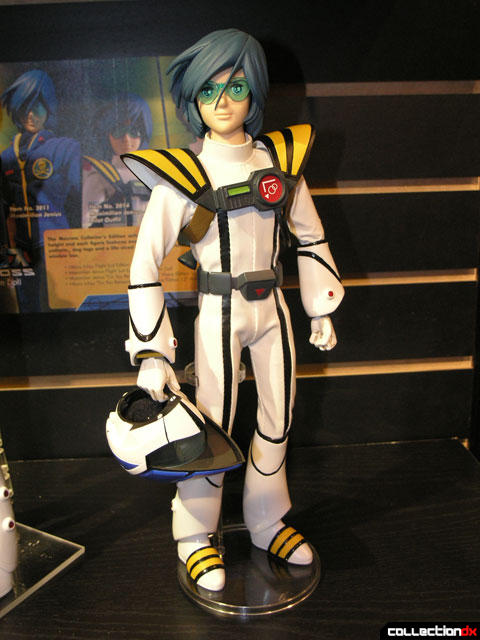 New 12 inch Macross figures on display were the helmeted versions of Hikaru (Rick) and Max in their "Do You Remember Love" style flight suits. What we did learn about these is they are actually manufactured by Toynami and designed by Popbox not made by Popbox and distributed thru Toynami as previously thought. 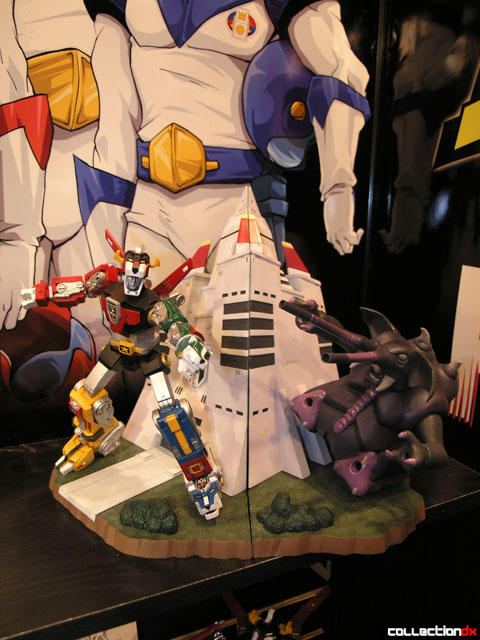 One of the very best Toynami releases to come out so far has been the now sold-out Masterpiece Voltron, well they’re not done with the franchise yet with several cool items to add to your shiny, metal-laden Defender of the Universe. 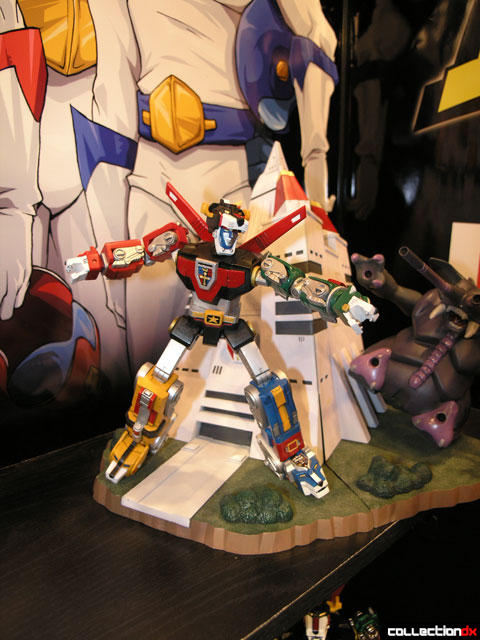 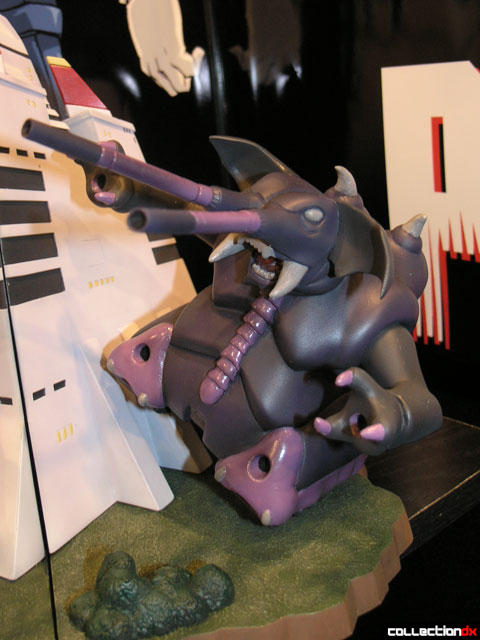 First up is a set of beautiful bookends featuring the Castle of Lions and Voltron on one end and a robeast on the other. 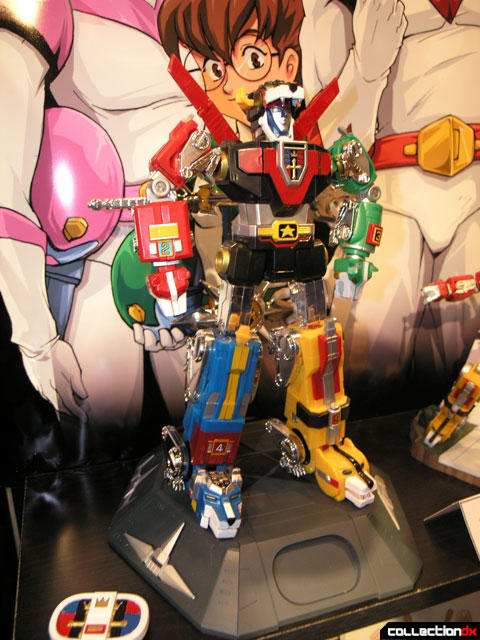 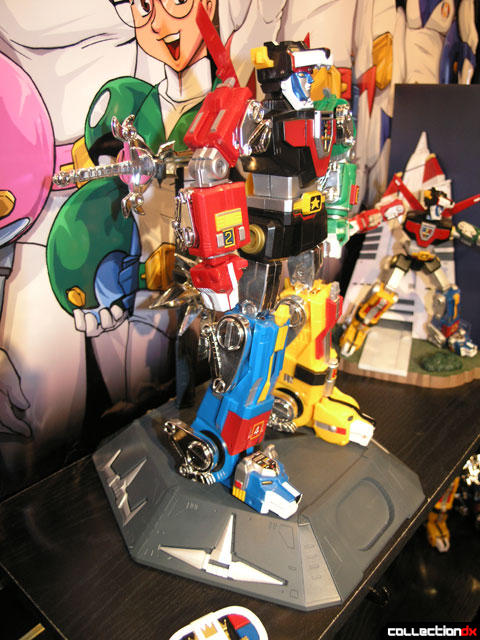 The smaller scale Voltron shown last year was replaced with a larger plastic one that is the same size as the Masterpiece version with an expected cost of $60. The toy features the same sculpt as the diecast counterpart just at a lower price point. 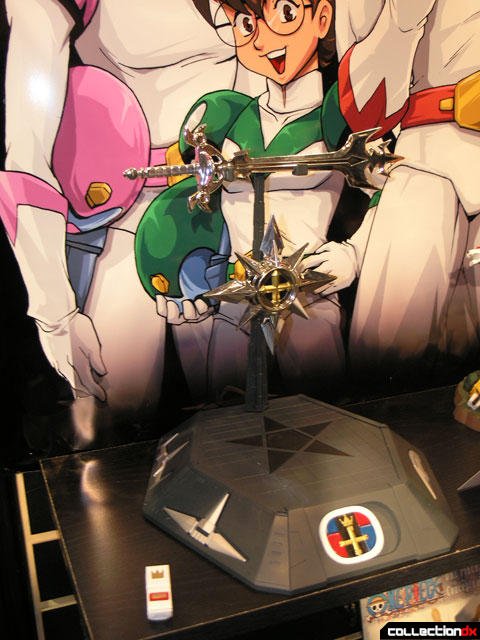 Also shown was a new display stand for Voltron. This stand will be sold separately and come with blades for each of the Lions as well as a Lion key.

Check the pictures, the key actually will slide around like the cartoon to activate the base's lights and sound effects.

Bleach and Naruto continue to do well for Toynami and new figures were shown as well as older ones. Interesting to note is Toynami is distributing Bandai Japan’s gashapons for Bleach.

Toynami did have Skelanimals and Futurama on display but our time with George was limited so we did not get to any info about those.

14 comments posted
Any word on pricing of the

Any word on pricing of the megahouse cyclone?

So, to be clear, you're saying this toy (Mega House) is bigger than CM's Corp's version...it's more rugged...AND it costs about a quarter of the CM's version???

Yikes! Well...to be fair, CM's has a shred of diecast hidden somewhere in there...and more importantly, it's transformation is "perfect", while the Mega House is a disassembler (boooo). That's actually a pretty important distinction between the two.

It's still gonna be a tough one...I'd like to see more on the Beagle/Toynami "Masterpiece". If that features perfect transformation and proves to be a solid, durable design, then they'll get my bux.

Is the Valkyrie has the same mold as the previous (along with their problems)? or is it a new one???

I don't know Voltron [perhaps] as well as I should, but I have been slightly intrigued by the design. Not having a strong passion for it, I'm wondering if I should go find an old-school fully-transforming Voltron (just to have one) or this new version which is cheaper that the fully-poseable Masterpiece...?
------------------------------
CollectionDX Staff

Voltron was the precursor to Robotech in that it took two shows and made a quasi-connected show out of them. (Technically there were three shows but the second one got lost somewhere, even though they made toys for it.) It's a long story made longer due to the passage of time, I suggest you wiki it for more info.

It was originally made by Popy. ToyboxDX.com has some great Popy info and will start you on the path of seeing just how many damn versions of this thing exist.

The Toynami one is patterned (ripped off) after the Popy DX version of Golion. It has more articulation and longer thighs, but had two of the weapons the old toy did. This stand finally has the lion swords but believe me, it's still a long ways off the original for accessories. My friend has it and it's arguably the best thing Toynami has made in the Masterpiece line.

If you don't care if it's a knock off, the Lionbot is almost as old as the original and has all the crazy weapons the original had, it goes for about $100 and is made quite well.

I'm going to be buried with by Godaikin Golion.

Nah- I'm, not one for bootlegs unless I unintentionally get one; I prefer legally-licensed products. But, I also don't know what companies make what in this case.

I already knew that "Voltron" was a mish-mash like "Robotech" was, but was more focused on a similar, related saga. So, the which way should I go for the better yet less-expensive route for the original GoLion- American or original Japanese ver.?
------------------------------
CollectionDX Staff

looking forward to it.

I thought the Beagle Ride Armor was a subcontract job from day 1. They don't have the muscle to get the license, manufacture, and distribute a product like that on the scale expected. It all makes ense why it's not been seen and the scales were so close.

Jeez, I wonder if I should cancel my import of the Megahouse releases. I'm guessing the price will be the same, but the comment on weeks away with no preorders anywhere from retailers seems like BS. The Japanese one is days away, so I'll stick with importing them.

The Beta is $50 more than I thought, but I'm sure it's got something to do with CM's pricing. I'll probably bend over and buy one (or 3).

I hope a Popbox "Fokker" is in the works. It's the only one I'd buy.

Great coverage guys, this is the primary news I wanted out of Toy Fair, and I'm not disappointed (well maybe a little, no Masterpiece Dairugger).

when is it gonna come out? i want it so bad!