Onell Design made the most of their small booth in the urban alley at Toy Fair. Half of the booth was devoted to their day jobs as designers of the Beantown toys, and the other half was devoted to Onell Design Glyos System Series.

So the beans were out in full, on display were a multitude of new beans and bean related offerings. the Spoon racers are out and in store now, and coming soon are the Bean bots and the bean pots. Bean Bots are a modular figure that can be reconfigured in many ways to make vehicles, robots, battle armor and more. the best thing is that these parts are compatible with the Glyos System series, so you can add even more parts to your arsenal. 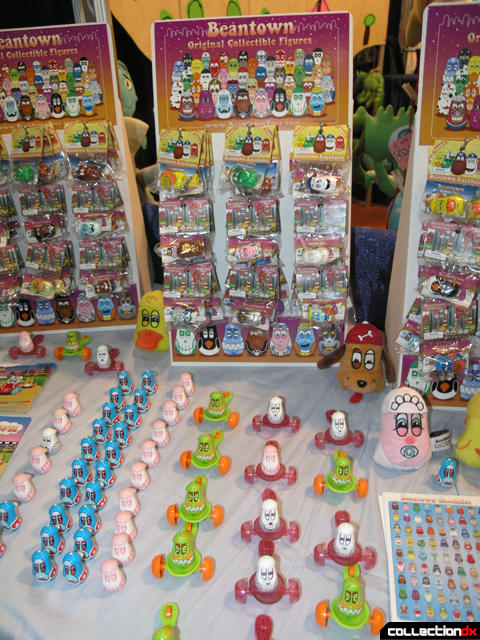 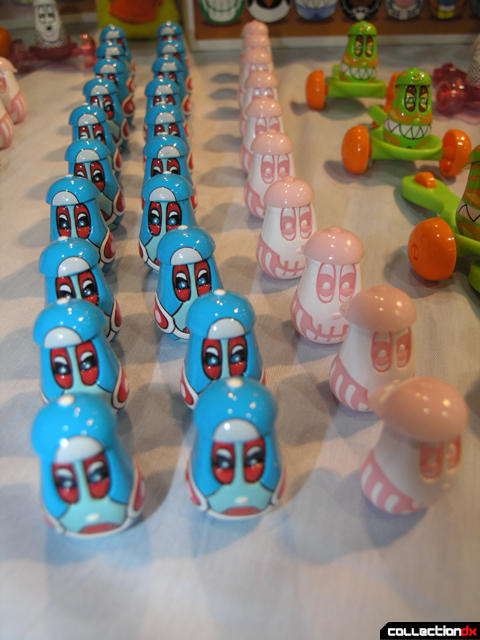 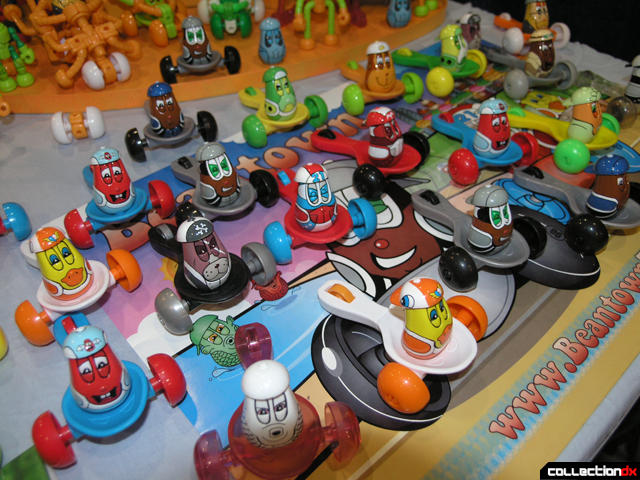 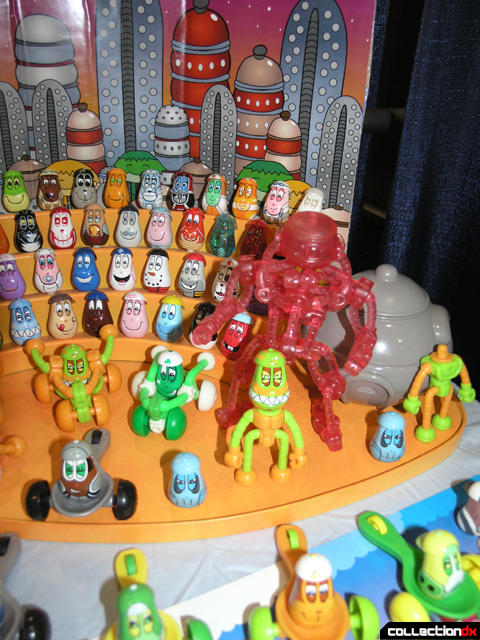 Of course our true love is for these little guys, made in every color under the sun. These things really are a lot of fun, and there were a lot of new colors on display in addition to the Gobon sculpt. 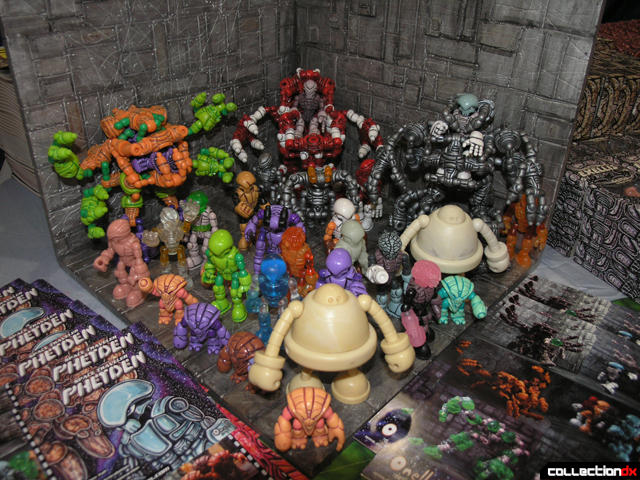 If you look closely you can even see some new sculpts... 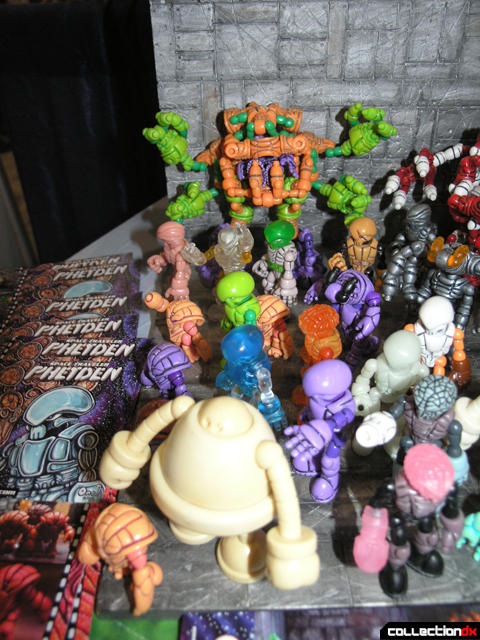 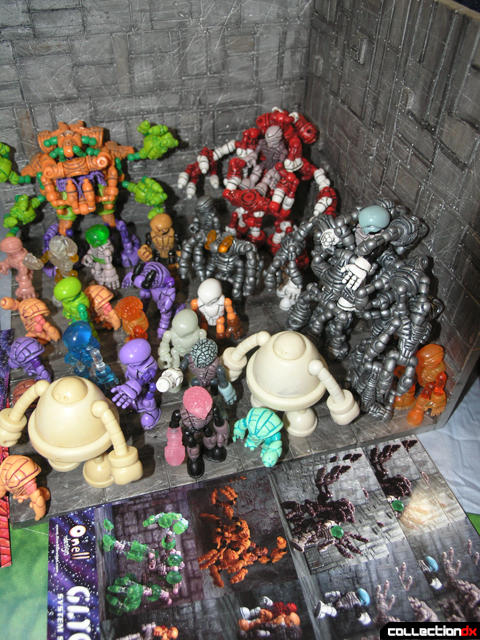 Matt let us take a peek at a new sculpt. This figure is symetrical, and has no dead end parts - perfect for assembling new creations! 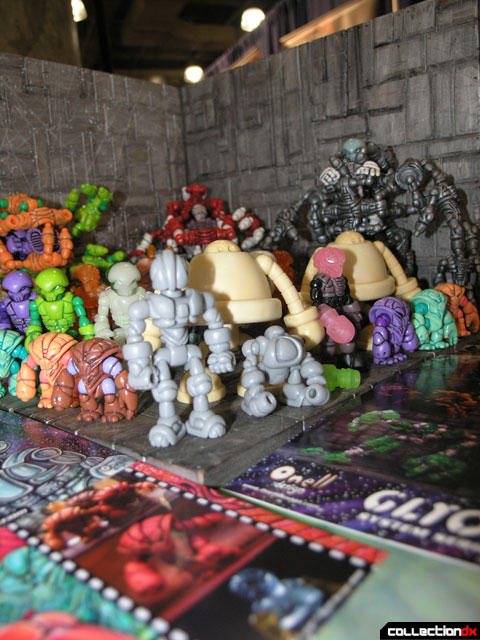 5 comments posted
I don't know what it is...

...But that last pic of the grey prototype build figure drives me bonkers. There's just something about the sculpt that so perfect. The contours flow throughout the whole piece and give it a very unified look. I can just imagine creating all sorts of weird things with multiples of this figure...and unlike doing so with the existing Pheyden and Exellis sculpts, something made out of this new build figure will carry that unified aesthetic throughout brilliantly. Heh...I'm even MORE excited about the build figure than the glowie figures!

I definitely can't wait to see what these guys have in store in the coming year!

Well, enjoy the picture, because some asshole stole the prototype right off the table on Tuesday morning. Luckily, Onell can make more.

I was with Matt--late as hell Sunday night--as he was further refining the sculpt. Yeah, luckily it wasn't the only master. By the end of next week, it should be ready for shipping to the mold folks! Yay!

Big up to Nekrodave--I'd almost completely forgotten this story!!

So, yeah, some jerkoff stole the build figure prototype, right? Sucks. Well, there's some interesting history to that particular piece!

Late Sunday night, I was hanging out with Matt while he was doing some carving and scraping to refine the sculpt...he got up to pee. This is around 3AM. The next thing I hear is a scream from the bathroom! A few seconds later...another scream!

Apparently, Matt was so immersed in refining the figure, he'd simply kept it in his hand while going to the bathroom! You know where this is going...

After relieving himself, he dropped it into the damn toilet!! First scream. He, of course, didn't flush--he reached in, fished the thing out, bare-handed, then immediately brought it over to the sink to wash it off. Well...the pee-water was still dripping off the figure...and, of course, got all over the toothbrushes neatly arrayed on the side of the sink! Hence, the second scream!

After a couple minutes of washing and pouring rubbing alcohol over the toothbrushes, the ordeal was over. But at least now, we can take some solace in the knowledge that the ass who stole the prototype is now touching Matt's pee.

Touching his pee. There's something karmic about that.

I hope that dickweed absent-mindedly chews on it while he watches television.