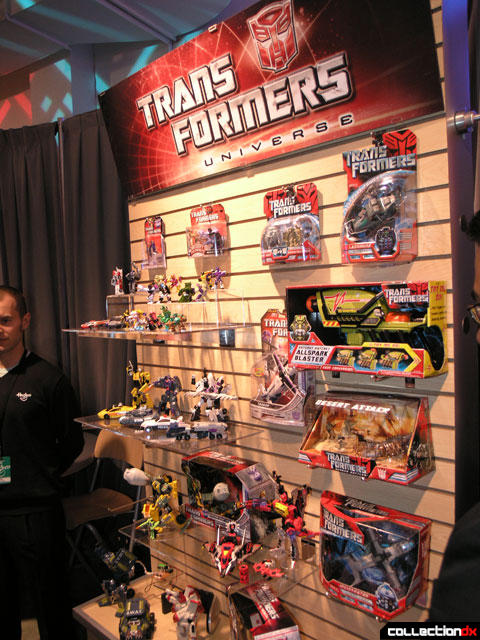 Transformers were huge last year and of course Hasbro has more to add to their line-up this year. The big focus was the new Animated line for the new cartoon and while I didn’t care for the cartoon I must say these designs make for some very sharp looking toys. Give them a good look when they hit shelves in your area. 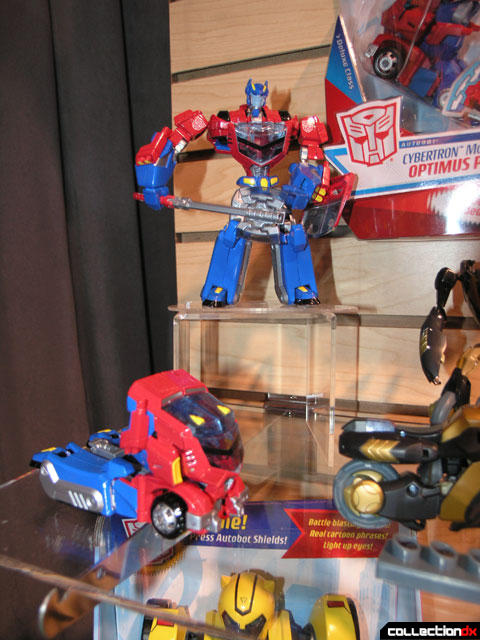 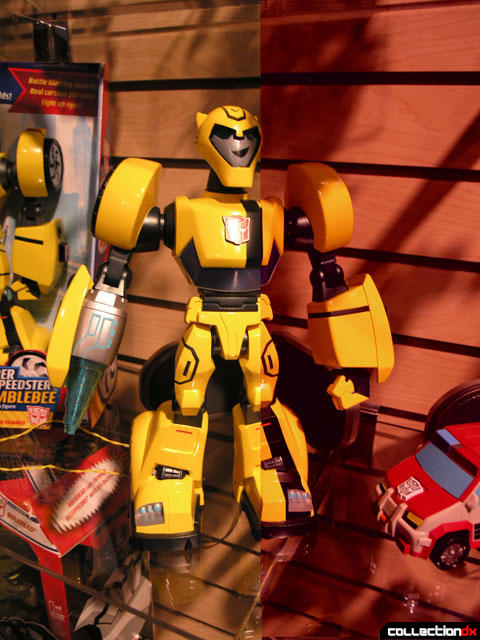 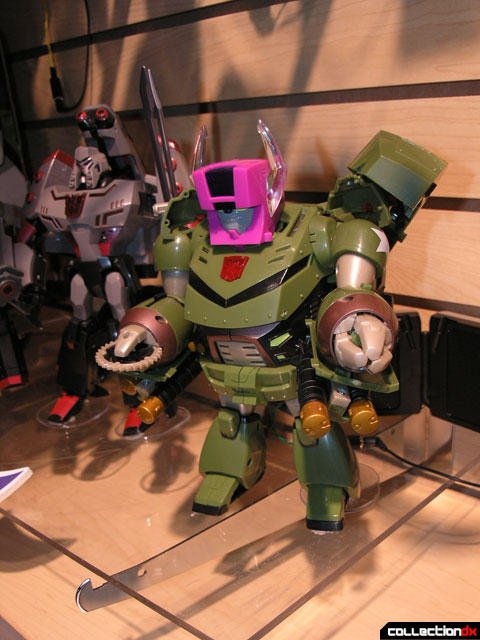 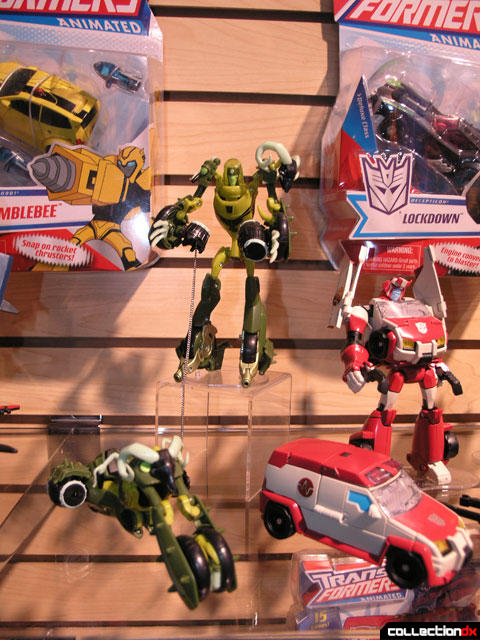 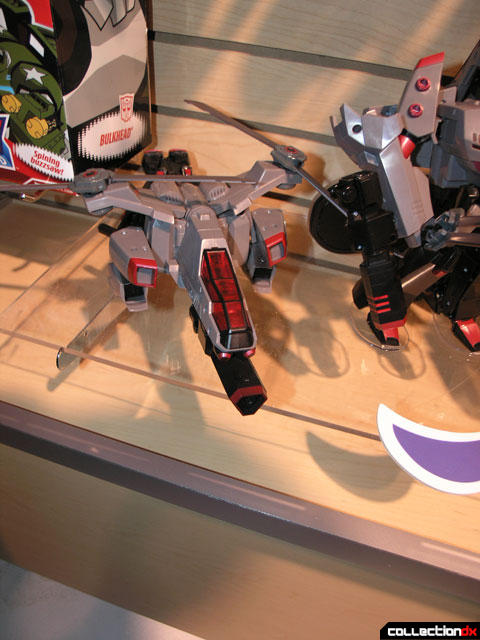 Movie toys continue with the “power of the Allspark”. Most characters are given a repaint and some new accessories. Most notable is the redo of the leader class Optimus Prime with flip out blade for his right arm. Most toys in this line seem to benefit from the more movie accurate paint schemes. So start saving those pennies to repurchase everything you bought last year. 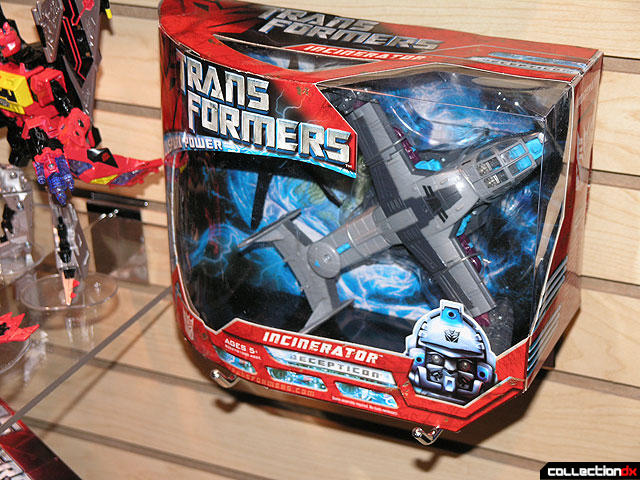 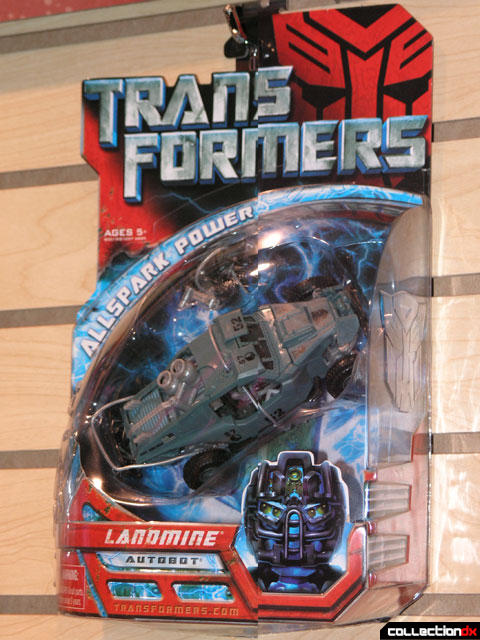 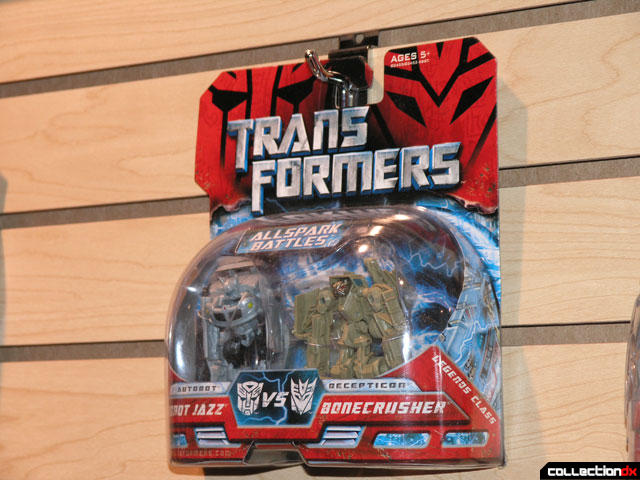 The Universe line is where pretty much everything else gets put. The “classics” line that proved to be a surprise hit with kids and collectors has been rolled into the Universe banner. 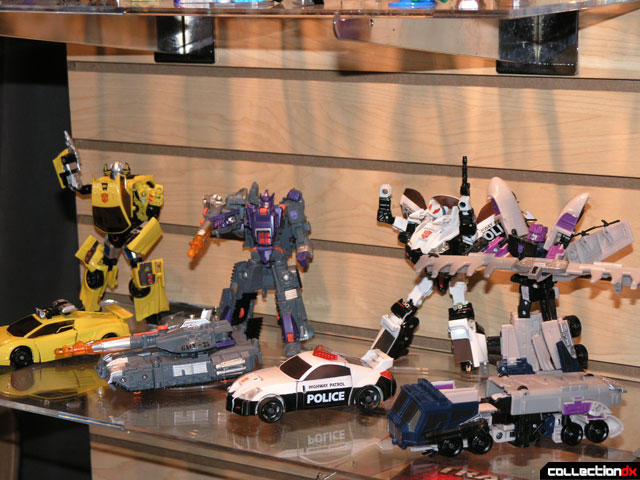 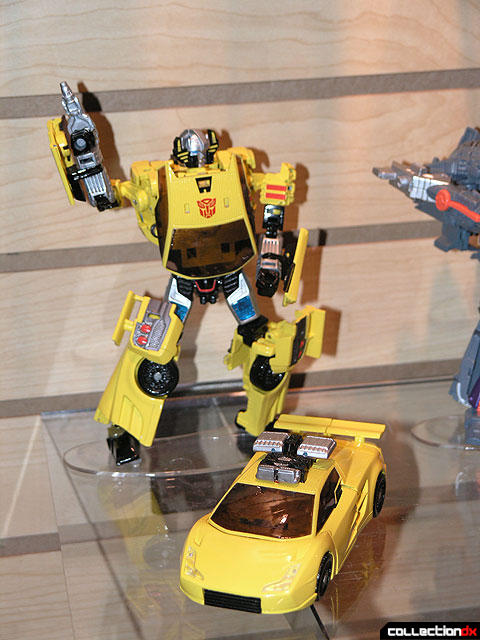 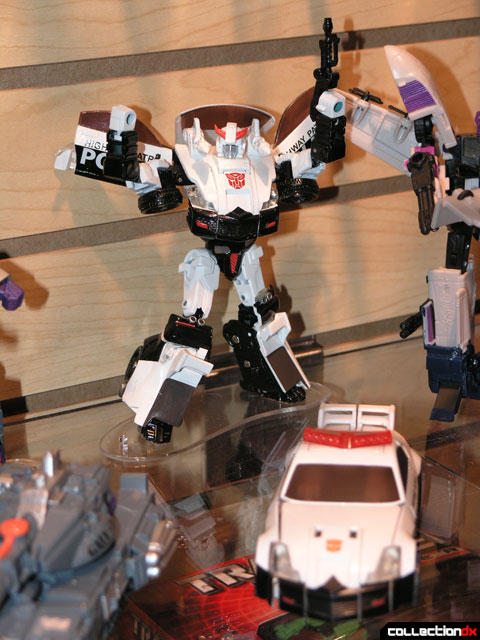 Highlights this year will be Sunstreaker and Prowl. Both look fantastic while the Galvatron turns into a tank instead of a gun. 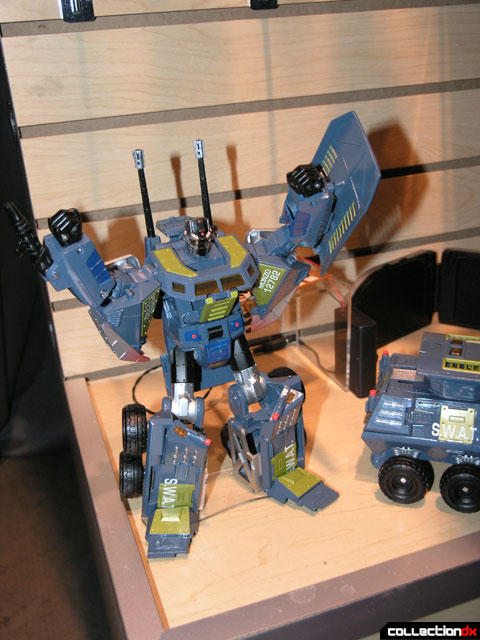 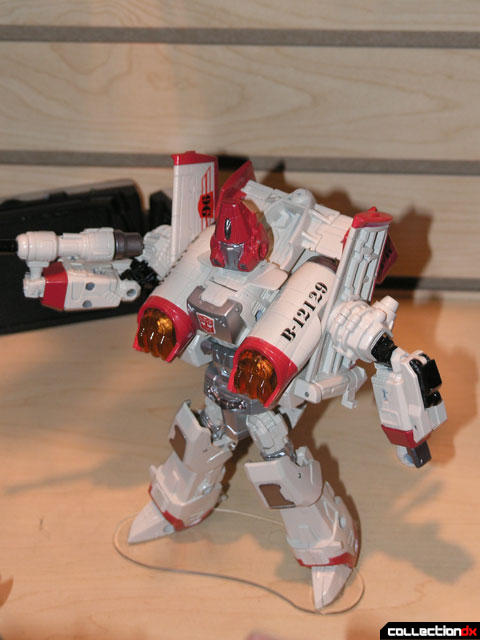 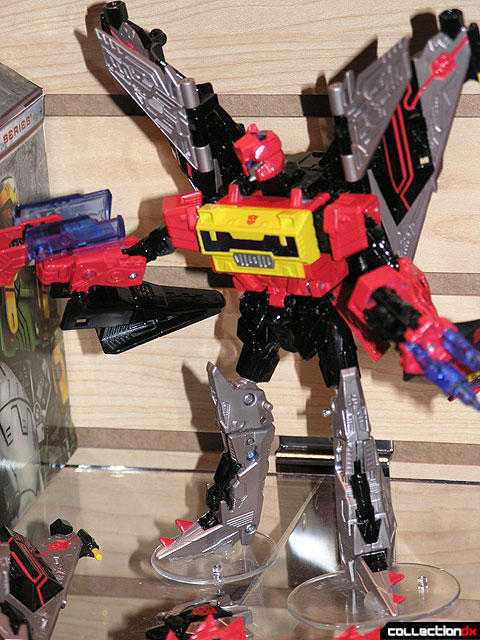 Besides a bunch of repaints they also include the Robot Heroes and role-play items under the Universe banner. 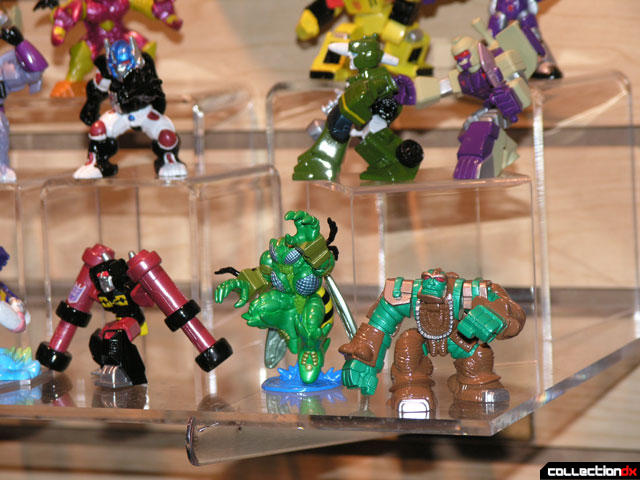 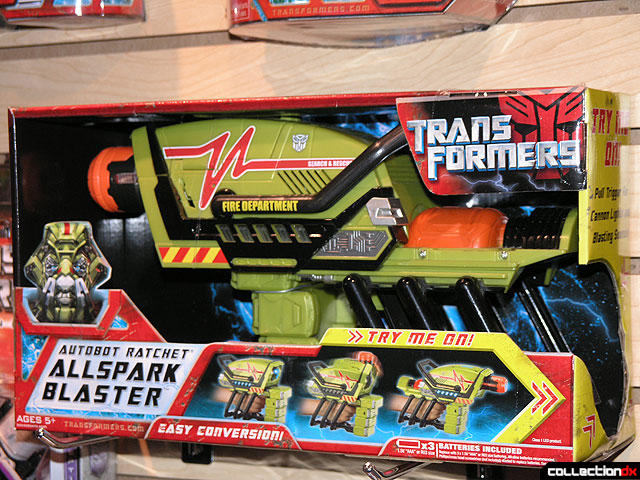 There is certainly much under the Transformers brand to keep kids and collectors busy for some time to come. To see all the photos head over to the gallery.

Good to see the new Classics in Japan will be released here (like Sunstreaker, Galvatron, and Prowl), but I wonder if the Japanese repaints of the first wave will make it here. I'm referring to the G1-accurate color schemes for Prime, Bumblebee, Megatron, Starscream, Grimlock (with chrome!) and others...

I kinda want to see this Leader class movie Prime with flip out blade. I really liked that toy, so if this version looks better, I may have to "upgrade"...then again, I'll miss the missile-firing gun.

No plans to release the new paint schemes in the US, but we may see repacks of previously released classics.

The new prime will also have a more movie accurate head sculpt.

These are hit and miss. I already know what I'm getting from Transformers Animated, though I'm gonna avoid the jumbo-big versions of Bumblebee (he don't change, and I'm no big BB fan) and Prime (Voyager-class is sufficient for me), and I'm not thrilled with Ratchet. This is, however, my first glance at Earth ver. Megs, and I'm definitely grabbing him! I'm torn on whether to stay with getting the Voyager-class Bulkhead or wait for the Leader-class seen here. (BTW, what's up with the pink head on Bulkhead???)
Who's the green & yellow chopper motorcycle with the ram's head on the handlebars? Haven't seen him before, but he dolled-up "...Animated"-style.

You won't be seeing me review movie Incinerator... unless I'm paid or he's gifted to me. I've seen pics of him elsewhere, and the legs & arms just totally killed it for me. Same with the non-retracting rotors. I like the whole V-22 idea since we saw them in the movie (and, in general, they're kinda cool-lookin'), just not this take on it in movie-style.
I picked-up Landmine already, so I'll be covering him- I'm guessing- with the next month-or-so for CDX. (I also got Movie Scenes Bumblebee and Longarm, so they're coming too!)
I'm still waiting for the good word that they'll make an articulate and transformable figure of Dispenser- the surprise-favorite Mountain Dew 'bot from the movie! (Please make him a Voyager-class figure!)
They're just trying way too hard with that Ratchet-themed blaster. I want the hidden-shield Super Soaker released again 'cause I missed it!

Think I'll give Classics/Universe Sunstreak a wide berth. Galvatron I might get, but I'm not so sure I like his aesthetics so much; I think an alien tank might have done him more justice, or a retooling of the original toy from 1986 when the animated movie came out and introduced him.
I didn't know Tankor was going to be a Deluxe-class-sized figure! I was on the fence, thinking he was at least Voyager-class size. Well- that's the nail in the coffin as far as he goes!
Onslaught- oh yeah!
Powerglide- yes!
Prowl- absolutely!

I didn't think I'd like Incinerator, either, but he along with Evac have turned out to be two of the only movie figures I like (along with First Strike Prime). He really is a great figure, even though he doesn't have any hands.

Well, it's not the lack of hands that really bothers me, even though I do wish those prop blades had some joints to retract them. As I said, it's the blocky legs & feet- from a stylistic view- that bother me enough not to get it. If it weren't for that, I'd also have no problem with the unchanged tail hanging off his back, even though it contains the trigger for the propellers.