Who knows what amazing alien adventures await Ben Tennyson in 2008, as Cartoon Network’s hit show for boys 6-11 will unveil the all-new series Ben 10: Alien Force this Spring.  This new series features Ben and his cousin Gwen five years older, Grandpa Max missing under suspicious circumstances, and an unlikely friend in Kevin Levin, Ben’s former energy-absorbing nemesis.  With the help of the awesome Omnitrix once again, Ben and his allies tackle more extraordinary adventures while encountering a new cast of aliens, both heroic and evil. 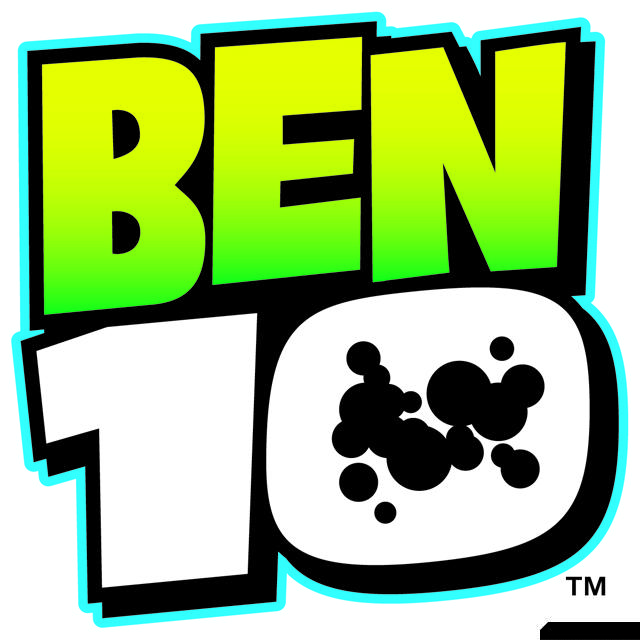 For spring - Featuring the most popular Ben 10 characters, these figures now offer unique translucent parts or details.  Kids can show off their figures with the display stands that resemble each alien’s home planet.  The planet backdrop doubles as a collectible card with fun facts and trivia on the back.  Insert the card into the stand to reveal a secret code that unlocks exclusive downloads online in the “Ben 10 DNA Lab.”  New characters include Benwolf, Benmummy, Wildvine, Cannonbolt, Benvicktor and a limited edition “Ultra Ben,” which will only be available in April. 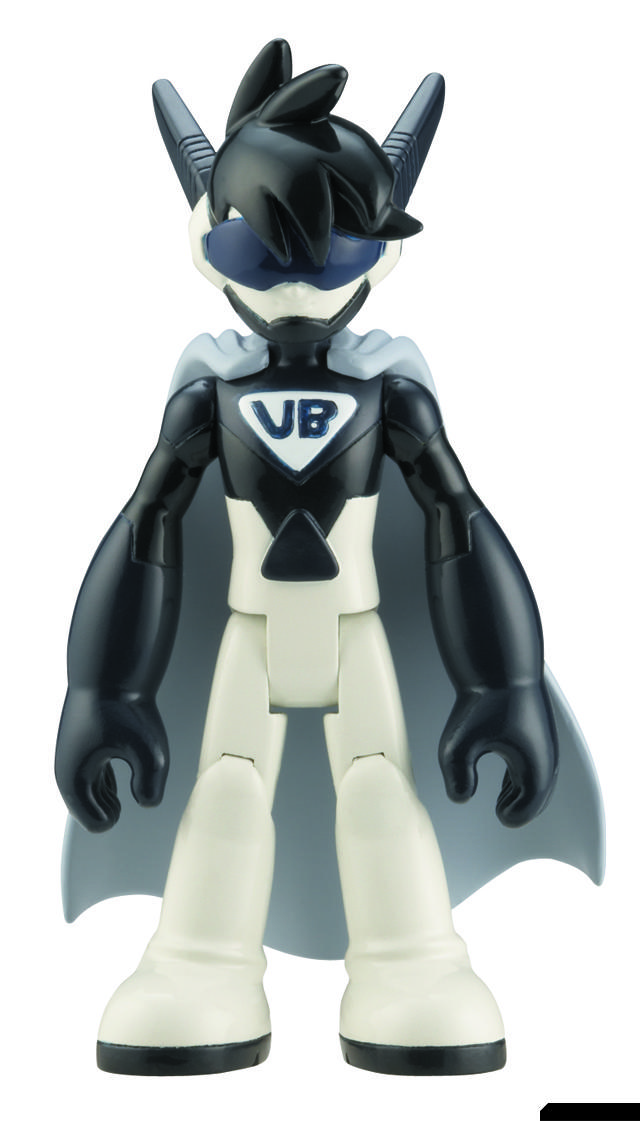 For Fall - Featuring the most popular Ben 10 characters, the alien figures come with a unique translucent mini-figure that projects the alien’s silhouette and unlocks new alien light and sounds when used with the all new Ultimate Omnitrix.  The Ben Tennyson figure now comes with a cool hover board.  Each alien figure also includes a collectible card that reveals fun facts and trivia about the alien and his home planet.

Spring 2008 - With some of the most unique offerings of any action figure in the boys’ category today, each DNA Alien Heroes figure offers lots of play value with a cool action feature.  Upchuck launches a plastic marble from his mouth, Wildvine oozes slime from his back and features stretchable arms, and Ghostfreak pops a colorful growth out of his chest and rotates his head 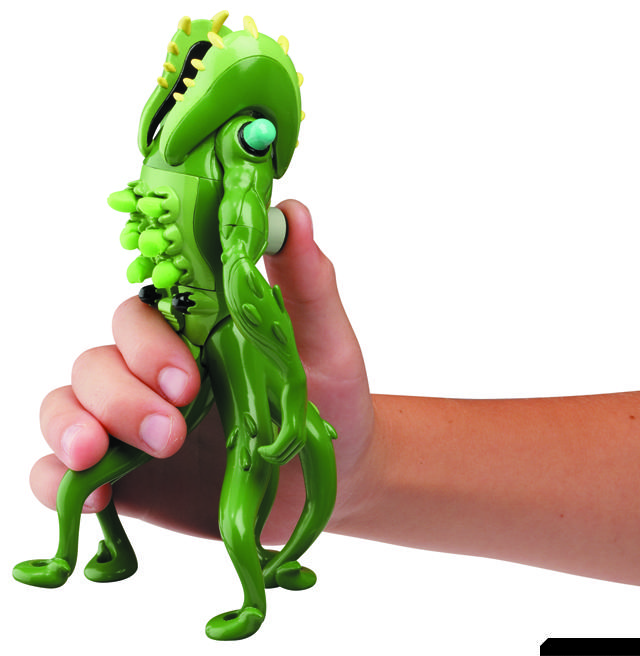 For Fall - Kids can add planetary powder to Swampfire and watch as he oozes goo from his arm.  Press a trigger to transform Humungosaur into fighting mode – his arms lift up and his mouth opens as he flexes his muscles.  Kids can even flip Chromastone upside down and watch as his ultraviolet fluid fades away in light – just like on the show!

For Spring - Kids can transform these large scale Metamorfigures from aliens into completely unexpected toys.  Offering 2 toys in 1, each figure features cool lights and sound phrases directly from the TV show.  The new Benwolf figure transforms into a real working megaphone that kids can speak into.  Cannonbolt transforms into a rumbling, battery powered ball that randomly bounces at high rates of speed, while Upgrade transforms into an ultra cool car complete with sound effects. 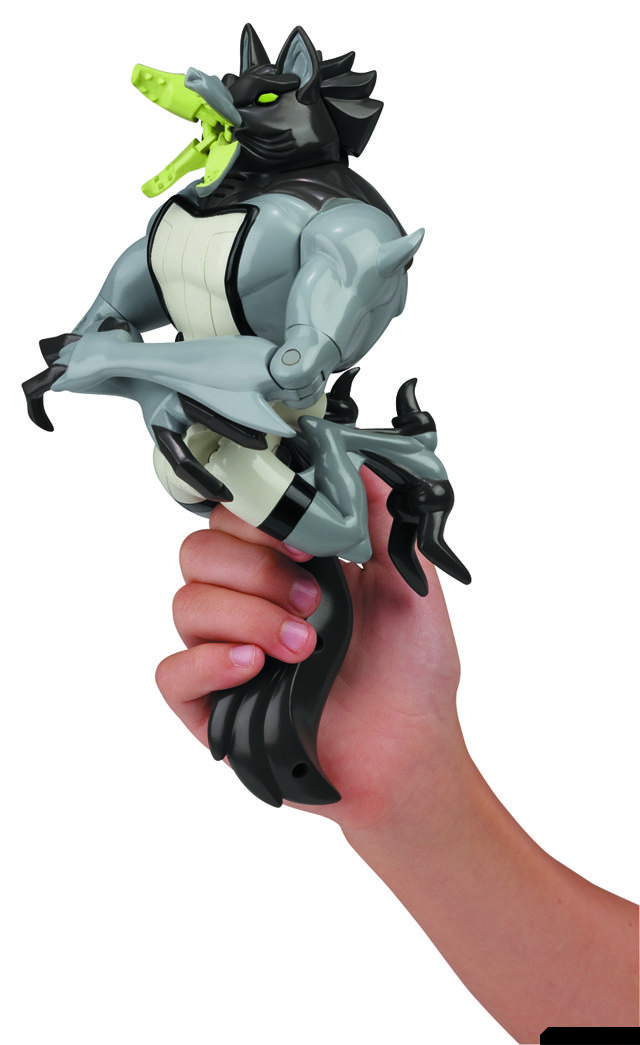 For Fall - Offering 2 toys in 1, kids can transform these large scale figures from aliens into completely new toys.  The new Humungosaur figure transforms into an orb launcher, while Jetray can be launched into the air as a glider.  Each figure also comes with a unique game challenge accessory so kids can use their figures for target practice!

Just like Kevin’s cool green muscle car in the show, the Action Cruiser is more than just a car – it’s a new way for Ben and the team to fight evil. Loaded with many unique features, kids can transform the vehicle into battle mode and fend off evil aliens with the equipped weapons, or tap into cruiser’s lab and create planetary powder with the included capsules.  Kevin’s Cruiser can be played with other 4” figures, and even comes with an exclusive Kevin figure.

Kids are in control with this replica of Kevin’s green cruiser.  Drive the new, extreme K11 RCX vehicle in search of exciting alien adventures with the Omnitrix shaped remote control. 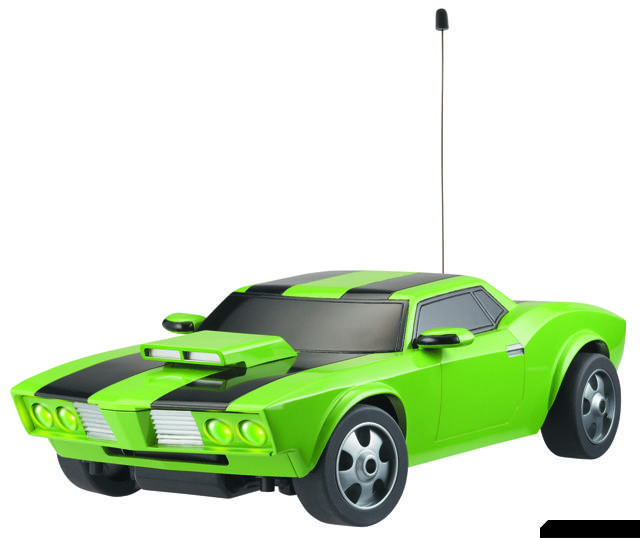 These totally new alien creatures resemble beasts that come from the home planets of the Ben 10 aliens.  Each creature comes with a corresponding 4” figure from the same planet that can ride on its back.  The creatures also have a unique transforming function complete with a light up effect.  Versions include Heatblast, XLR8 and Four Arms. 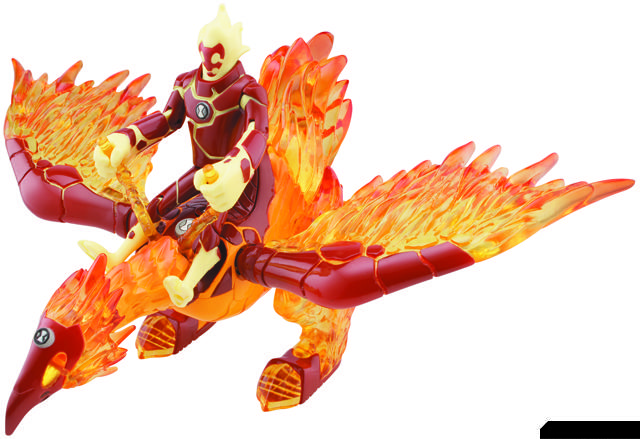 Just like Ben on the show, kids can project an alien’s image from the Omnitrix Illuminator.  Place the included animation disks on the face of the Omnitrix, and with the press of a button, the Omnitrix will project images of aliens and their environments. 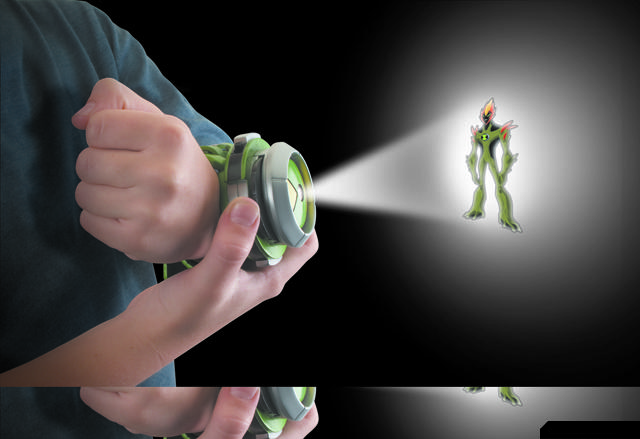 The Omnitrix is back and more powerful than ever before!  Kids can tackle all new alien adventures with the Ultimate Omnitrix, just like the one Ben wears on the show.  Kids can unleash new aliens and unlock light effects and alien voices using the included translucent figure. Collect additional translucent figures from the 4” figure sets (sold separately) and use them with the Ultimate Omnitrix to reveal even more special light and sound effects. 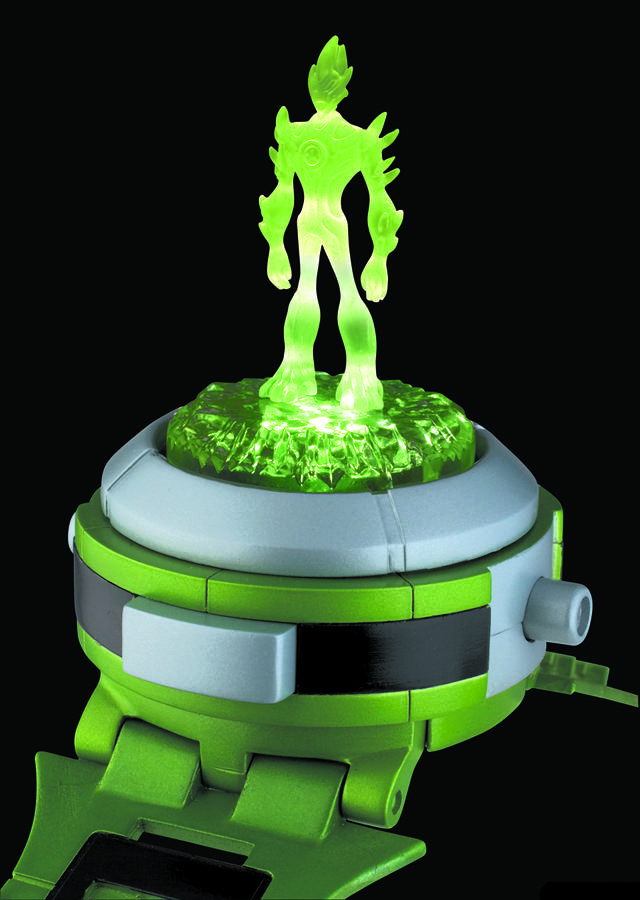 With endless combinations, kids can discover all new aliens with the Alien Creation Chamber.  This set allows kids to place five different alien parts inside the chamber, and with the twist of a knob, creates never before seen alien creations.  Each set includes 4 - 3” figures as well as alien recipe cards to create new alien combinations.  The set also include a special key to unlock each alien separately.  Additional 3” figure booster packs are sold separately in sets of 2.  As an added bonus, kids can use their Alien Chamber as a carrying case and use it to showcase all of their new alien creations to their friends. 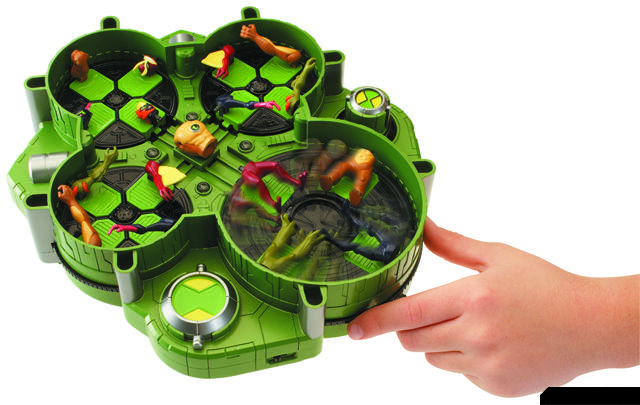 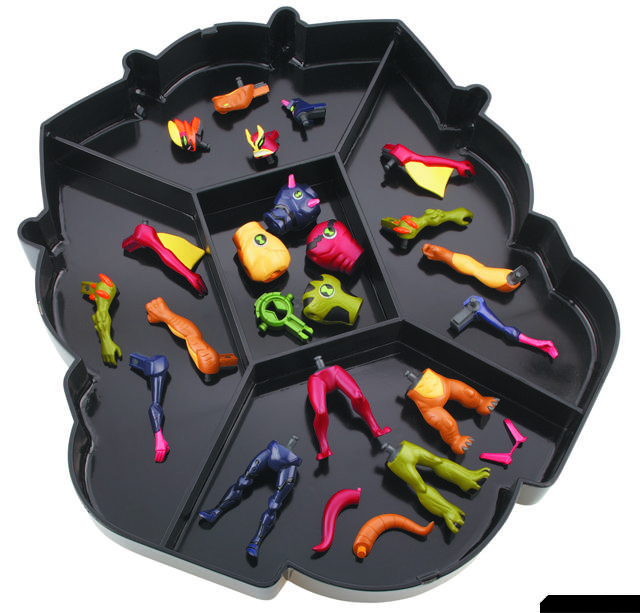 Kids can dissolve these alien rocks in water and watch as the DNA fizzes away revealing a collectible 1” miniature figure. 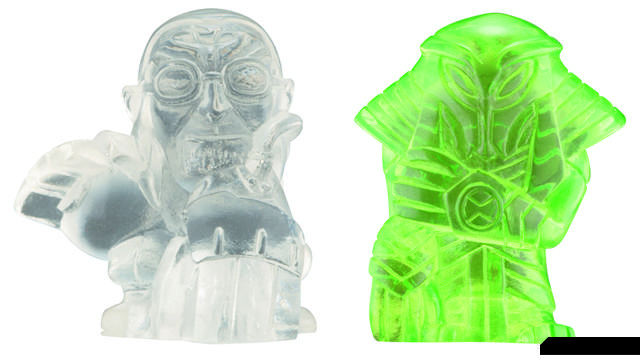 Each set includes a stackable container and three packets of mysterious powder that creates an out-of-this-world substance when mixed with water.  Kids can then scrape away all the gross jelly to reveal the included 1.5” translucent alien figure.  Collect all the popular alien characters and create a unique display with the stackable containers. 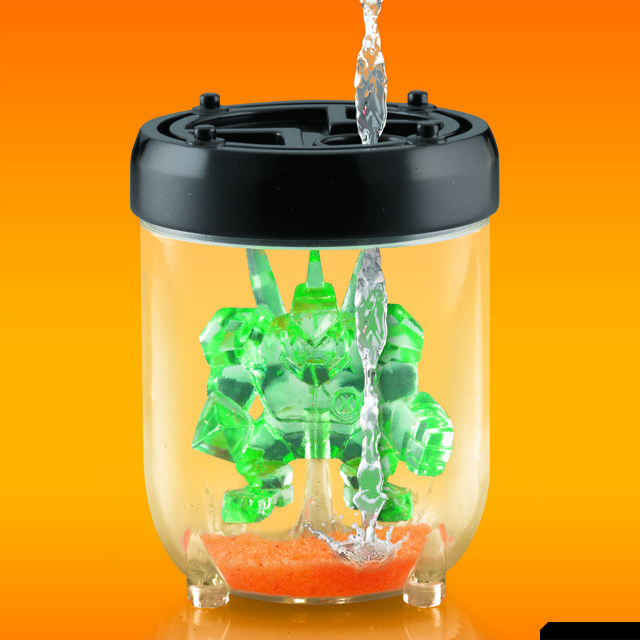 On the TV show, Ben is obsessed with collecting Sumo Slammer cards.  So Bandai America created the wacky and original Sumo Slammer Battle Sets.  Each comes with 6 sumo-sized aliens that kids use to battle with friends.  Turn the toy’s innovative packaging into a miniature dojo and face off against one another.  Game play begins when kids place one character each in the arena and use the plastic “buttons” to compete.  The last alien standing is the winner!

Each set also comes with 5 collectible cards that you use to challenge your friends to a Menko battle.  Menko involves a player throwing down his card, trying to flip his opponent’s card over by striking it as hard as possible.  The player who takes all the cards, or the one with the most cards at the game's end, wins the game. 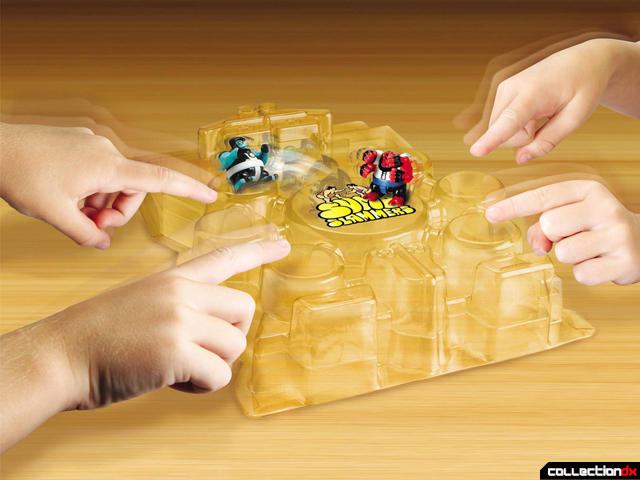 This fun Voice Changer is shaped just like the Omnitrix and can be worn on the arm, while the microphone can be attached to your shirt.  Kids speak into the Grey Matter shaped mic clip and their voice is distorted to sound like an alien.  To complete the transformation, the wearable character glasses feature Four Arms, Heatblast or Grey Matter, and Stinkfly, Diamondhead or XLR8. 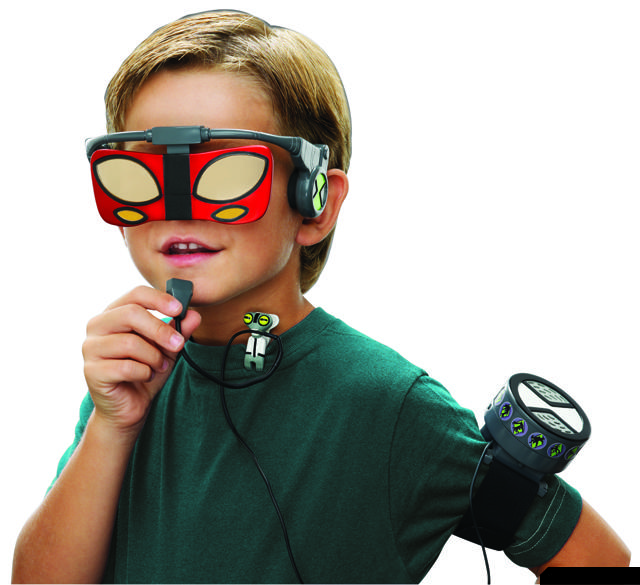 Kids can get into the action with this unique role-play set that features a wearable Omnitrix and three different arm attachments designed after some of the most popular aliens.  Two sets are available with three characters each:  Heatblast/Diamondhead/Four Arms, and XLR8/Benwolf/ Wildmutt.  By attaching one of the plates directly onto the Omnitrix, boys can trigger a sound and phrase from that alien.  Kids can also punch with their super-powered arm to activate more sound effects from Ben. 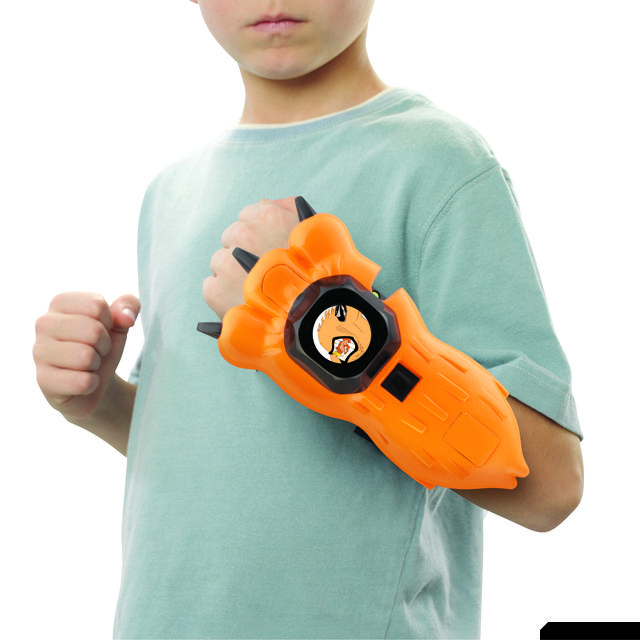 Stage the ultimate battles on Vilgax’s ship, which opens up to reveal numerous play areas.  Kids can set up face-offs between their miniature Transforming Alien Rock figures in the slime pit or the Sumo Slammer figures in the battle arena.  The battle ship also includes a ramp for the 4” Ben figure to race down on his skateboard, as well as a super shooter that fires real slime.  Comes with an exclusive 4” translucent Ben, 2 Sumo Slammer characters, and 2 Transforming Alien Rocks. 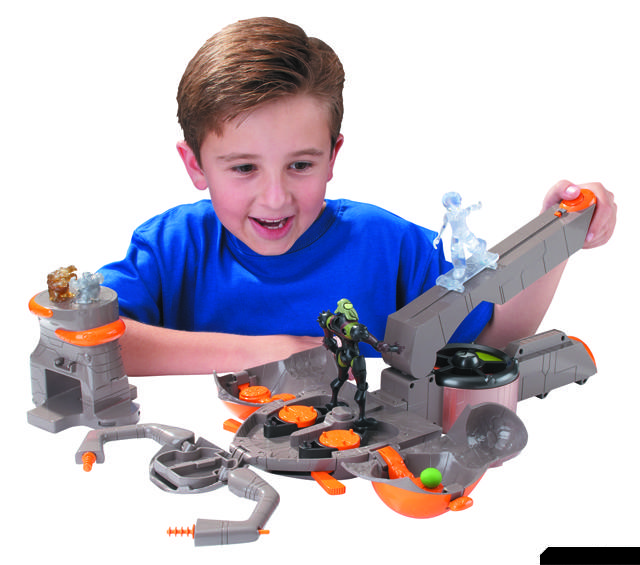