This is an article I've been meaning to write for quite some time. The scholarship, if I may use the word, on these toys is quite limited. I've done some reviews of individual toys over the years, but nowhere on the net was any sort of comprehensive list ever posted. A while ago famed collector Tom Franck finally showed the initiative to start to gather up as much information as possible regarding what toys were made, who made them and how many variations there are. So he sent me his list and I added anything that I knew was missing. But I knew that to really get to the bottom of it all, we'd have to call on the help of someone who lives where these things were sold. So I contacted a friend, Italian super collector Cristiano Rucco, for his expert advice. Between the three of us, I think we've got most of this territory covered. Of course, none of us would be so bold as to claim that we've got it all figured out. After all, new toys and variations are being discovered all the time and each of us learned something we didn't know just from each other during this process. So if anyone else out there has additional information or corrections, please let us know. But for now, I think this overview will help to make clear most of what's out there and give us all a checklist to work from when trying to complete our collections.

During the course of these articles, I will do my best to show images of the toys as well as link to existing reviews here on CollectionDX, but please bear in mind that I do not own a great many of these toys myself so in some cases old, grainy auction or collection photos will be used and in others descriptions will have to suffice. Furthermore, I am only including toys that are absolutely 100% verified to exist.

To begin with, we should point out that the seeds of this genre were originally planted back in Japan with Takemi's "Big Robo" series. These toys were in the Jumbo Machinder style, but stood only 16" tall and depicted the robots from the Machine Blaster series. 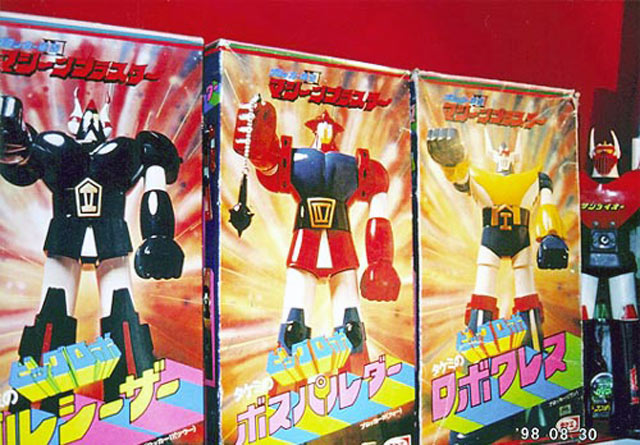 While Machine Blaster was not particularly popular in Japan, it was a smash hit in Italy and it should be no surprise to see that these toys were mimicked there. What is surprising is that while Robo Kress was made, none of the other Machine Blaster robots were. Instead, many other toys of the same style, but in a variety of forms, were.

Many different companies made these types of toys, but the three most prolific were "New Gio. Co., "SMC" and "Ceppi Ratti". I plan to do one article on each of these three companies before moving on to the smaller ones.

New Gio. Co. seems like a good company to start with since it appears to me that many of these toys are descended from toys they made as part of their "Robot Serie Dragon" line. There were 5 different characters released under this banner but all of them featured the arms and legs of Robo Kress while the heads bore likenesses of other popular Japanese robots of the day. These characters were: 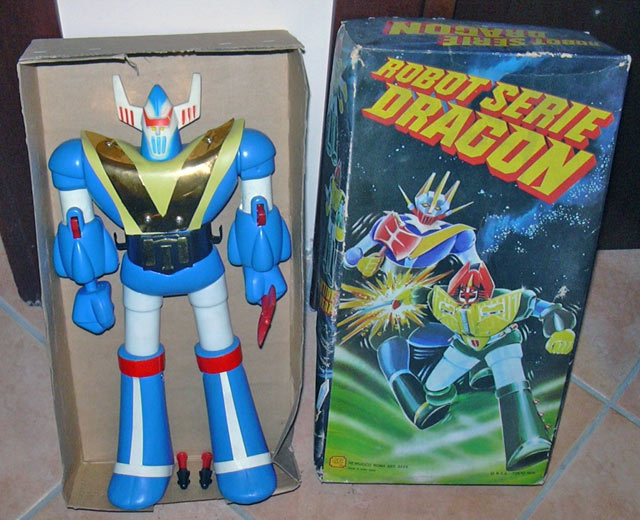 Side of Kondor Bleu box 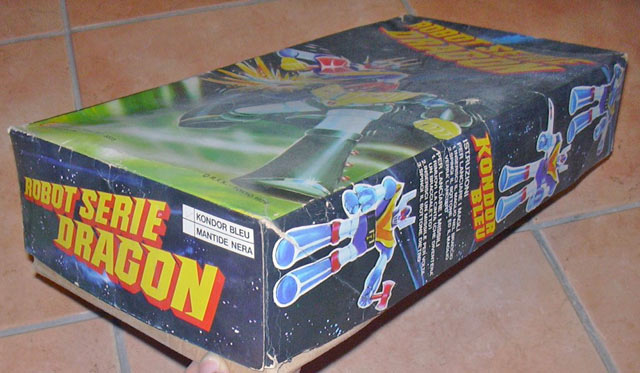 The second release contained Mantide Nera again, but this time the sides of the box showed it, along with Falco Rosso, Aquila Nera and Dragonne Giallo. No Kondor Bleu was pictured this time around.

New Gio. Co. also made several other very significant character toys in this genre, most notably Danguard Ace and Jeeg.

They also released a rarely seen set containing the same Jeeg toy above, along with a Starzinger ship and a robot that has Danguard Ace's body but a strange lion head! 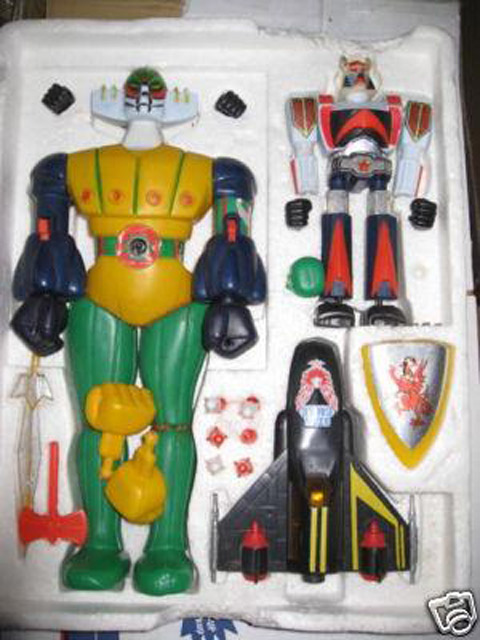 Lastly, they also produced at least two smaller (10") toys that should be included in this category. Both are extremely rare, so much so that I've only seen one example of each. One is an original character called "Robot di Pace", but the other is the famous Pegas robot from "Tekkaman, The Space Knight". Notice that they use the same arms and legs. 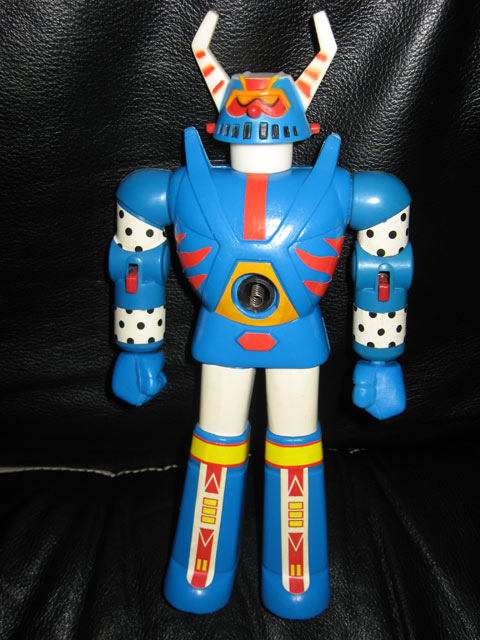 To be continued next week with a look at SMC...

Thanks Dave. I will now spread the word on Facebook with my Italian friends and I sincerely hope they will be able to help you out.

I remember back in the '70s and '80s, Italy was the mecca of anime on TV, robot toys and anime action figures!

TV at that time was chock full of mouth-watering adverts by Ceppi Ratti and GiG (the latter producing copies of Takara's JEEG under the Micronauti banner).

What I find interesting is the name of the company New Gio. Co., most probably a pun on the Italian words: 'Nuovo Gioco' which means 'a new game', 'a new toy' or even 'a new way of playing' as super robots were a novelty and a revolution in the '70s and '80s.

Last but not least, what made Blocker Gundan Machineblaster famous in Italy was not the anime as such but the Italian 'sigla' (the opening and closing theme) and the dubbing by Italy's best theatrical actors of the time.

Sorry, you're wrong man!
I had a long interview with the original owner and founder of New Gio.Co and he explained me the origin of the brand's name....
Gio. Co. are simply the first parts of his full name Gio for Giovanni and Co for Co...... (sorry, for privacy I cannot type his full surname!)

Oh, Dave, you forget to add the Tekkaman from same Pegas line....I'll send you pic.s if needed.
Great review, as usual!

Cool! I didn't know that! I had just assumed the same thing, that it meant "new toy co". Very cool inside info!

About the Tekkaman, yes, definitely send me a pic. I've not seen it yet!

Wow! So this company is more mysterious than I thought. Thanks.

Good stuff.
Dave, thanks for putting the time and effort into chronicling this stuff.
Some great photos in that archive, WOW! So many colorful things we in the US didn't know existed.
Ben, no you can't have the Jeeg, cuz I'm gonna get one first! Wahaha!