More than two thousand years ago, an ancient evil descended upon the land. Distraught, the people of the village sought guidance from their Emperor. Recalling the legend of the Jagun Warriors, the Emperor summoned the mythical guardians who soon appeared before him with five glowing stones. The Warriors explained that the stones contained the ultimate power necessary to conquer the evil. Leaving their fate to the "Power of The Eye," the villagers defeated the invading evil that had plagued their land. This legend has been translated today into collectible action figures and Power Eye Stones, recreating the deeds from centuries past.

Players use their Power Eye Stones to defeat each other in combat. The rules are pretty straightforward. Roll your stones, whoever gets the best roll, wins. You can augment attacks with special stones, called Spell Casters. There is an advanced level of gameplay that involves the action figures, but for some reason, it hasn't been revealed yet.

There are 35 stones to begin with. Each month, new stones will be released. You can get exclusive stones with certain figures. Power Eye stones come in four different factions: Monstrous Stones, Hidden Coves, Magical Sorcerers, and Twin head Dragons. Each faction has two types: Stone Fighters (used in your initial attack) and Spell Casters (used for augmenting an attack). All the stones are characters themselves, and have complete backstories, which can be found at jagunfighters.com 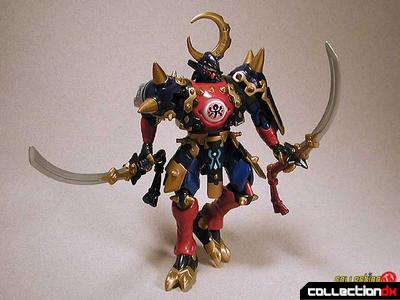 Rugi is a master swordsman whose skills are so great he can kill a dragon with a single blow. His father made the sword Rugi carries. Rugi has vowed to use it to destroy the man who killed his father. The Power Eye grants Rugi visions of the man he seeks, but the Power Eye never reveals his face. The crescent on Rugi's helmet represents his greatest influence-the moon. Rugi draws power from the moon; therefore he fights best at night. In the conflict between the continents, Rugi has refused to take sides. Although he will be involved in many battles, his true goal is to find the man who destroyed his childhood.

Rugi is articulated at the head, shoulders, elbows, hips and knees. Included are two swords that snap on to a belt on his waist, or can be held securely in his hands. Rugi's main gimmick is the spinning eye on his chest. Pull a lever on his back and the eye spins, deciding the outcome of the advanced gameplay.

Even without the gameplay aspect, Rugi is a solid figure. What it lacks in poseability, it makes up for in design. I would have like to have seen a little more articulation, such as ball-jointed hips and shoulders, wrists and a waist joint.

Overall, Jagun Fighters offers something for both kids and adults. Kids will get into the game aspect, and adult collectors will love the designs by authentic Manga artists from Japan.