Home » Otaku Culture » An evening with the Master

An evening with the Master

While Kimono My House was closing its doors for the last time, we walked the hallowed halls of a legend.

The original plan was that when the rest of the gang was out in San Francisco, we were going to have a get together at CDX HQ and try to have a teleconference from here.

However, plans changed when Josh Fraser said that Warren Schwartz wanted to invite us over to his place and do it from there.

Most of you do not understand the significance of this. You see, the man is something of a legend. He's been collecting Japanese toys for at least 25 years and has one of the most amazing collections I have ever seen. Few have been invited over to see it, and It was an opportunity that I couldn't pass up. 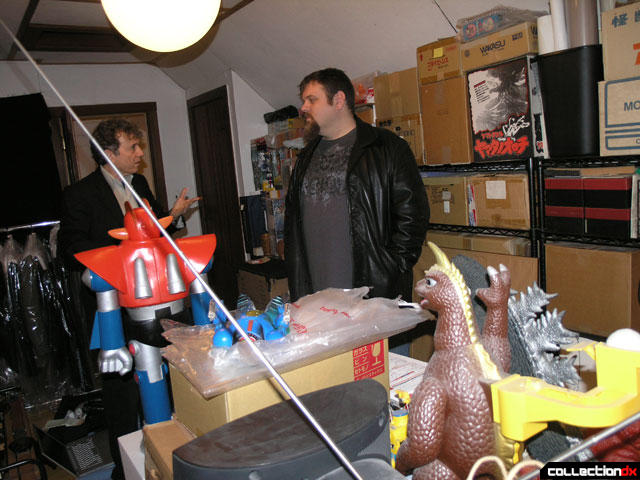 Of course, I shot a video. It's long, but fun if you are interested.

Warren's collection is not like your typical collection. Twenty Five years of collecting and you weed out the junk, only keeping those perfect boxed specimens. Each boxed toy is then stored in a bag or box on a shelf, and that bag has a list of what's in it taped to it. In some cases, the list has begun to fade and yellow due to age. 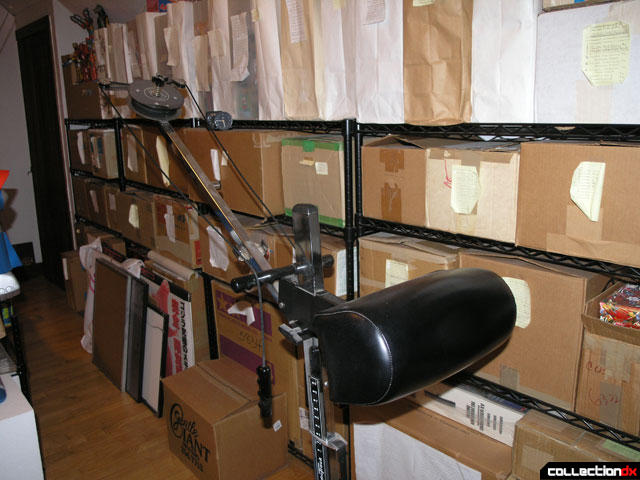 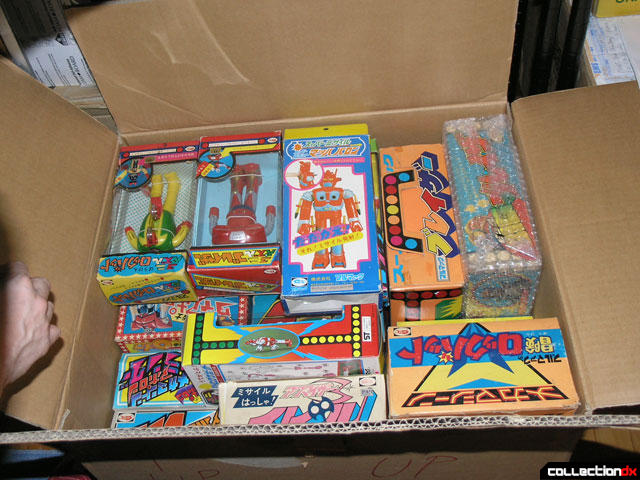 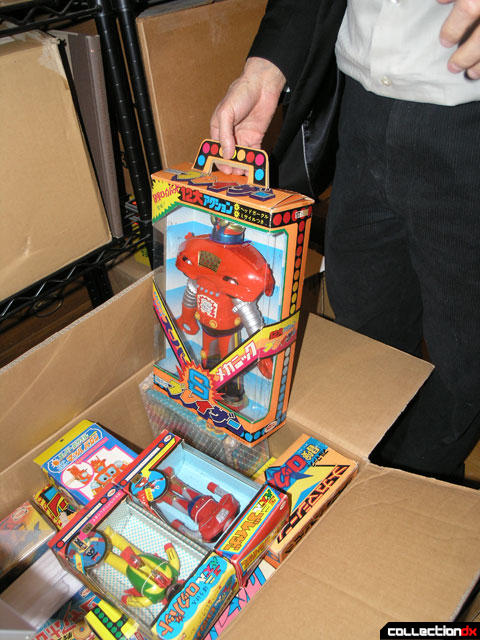 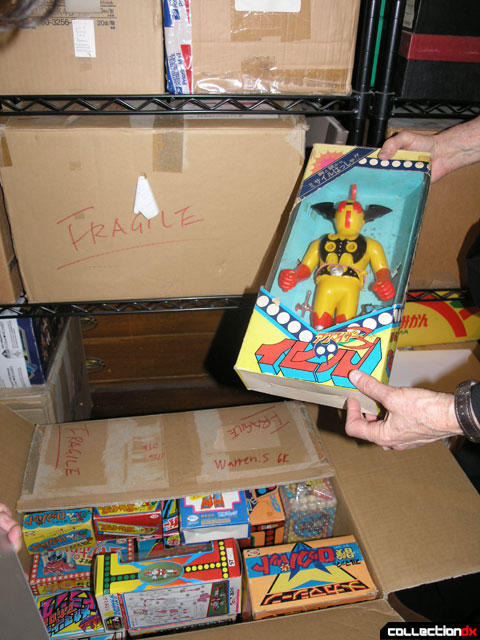 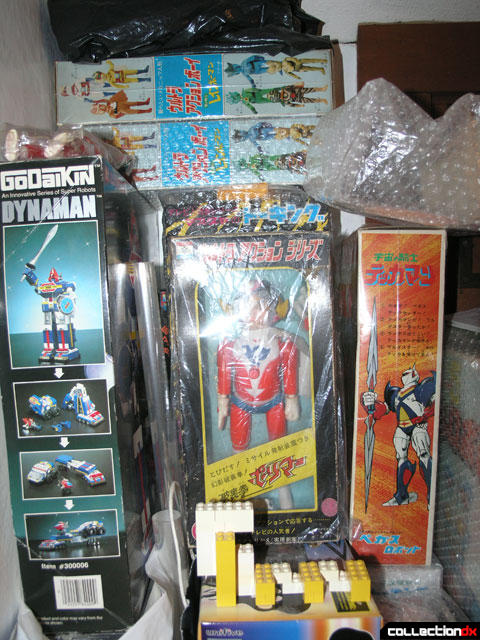 In the event that something wasn't boxed, loose items were tagged with a post-it note. 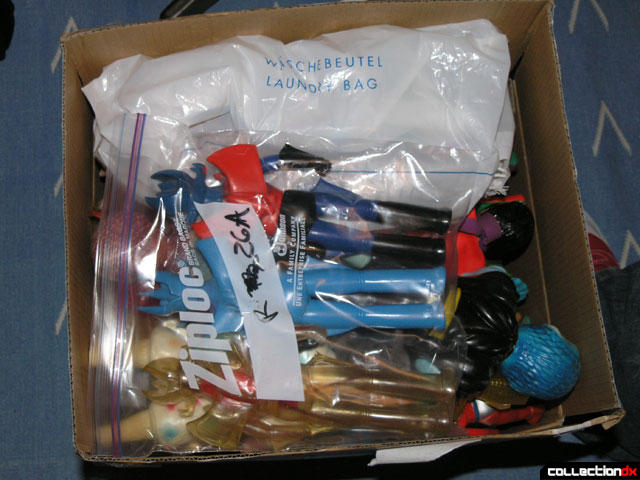 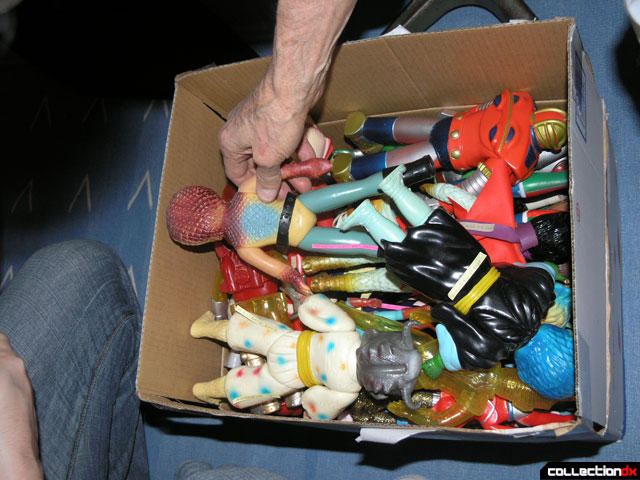 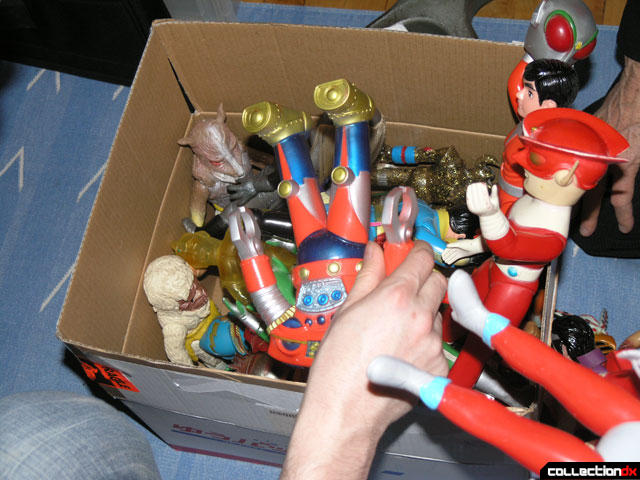 As we arrive we are led into a guest room. On the couch sits a full set of Popy Robocon Vinyls, each bagged and labeled. Warren shows me his latest acquisition - Robo Pyon, a small robot that looks like a Rabbit. He hands it to us, we check it out and then he tells us the price, and my jaw hits the floor. I'm not going to tell you what he paid, but lets just say its more than the last car I bought. 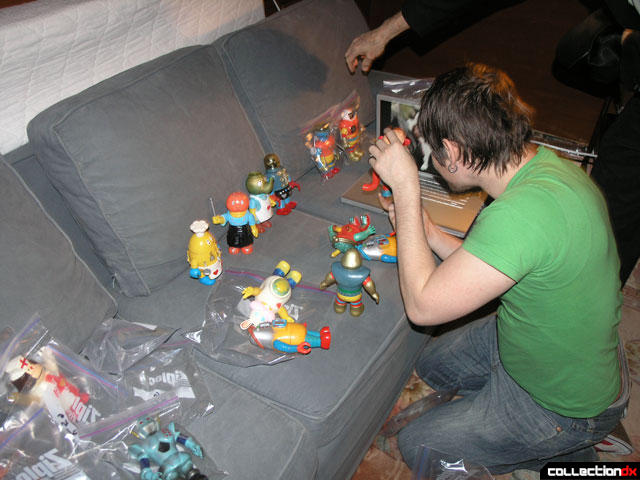 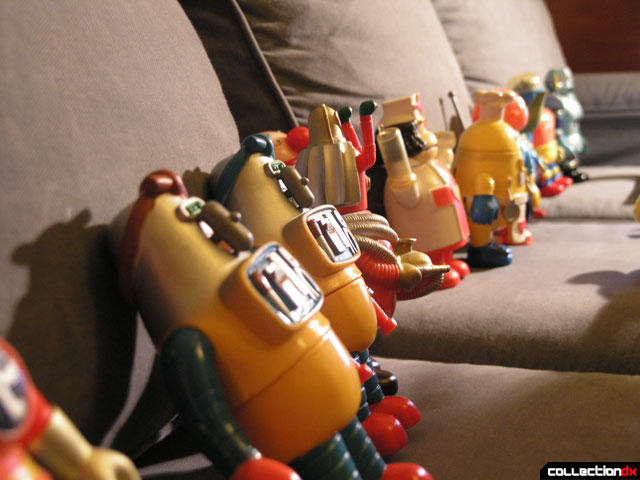 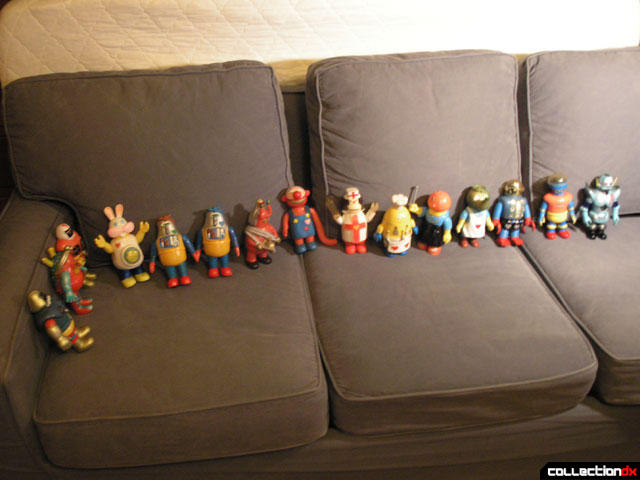 Back in the main toy room, we get to talking. I talk about my Raideen fixation a little. He asks what I am looking for and I mention this Raideen toy that flies around on a string. Within seconds he is fishing in a bag and lo and behold, he has one, in a near-perfect box. 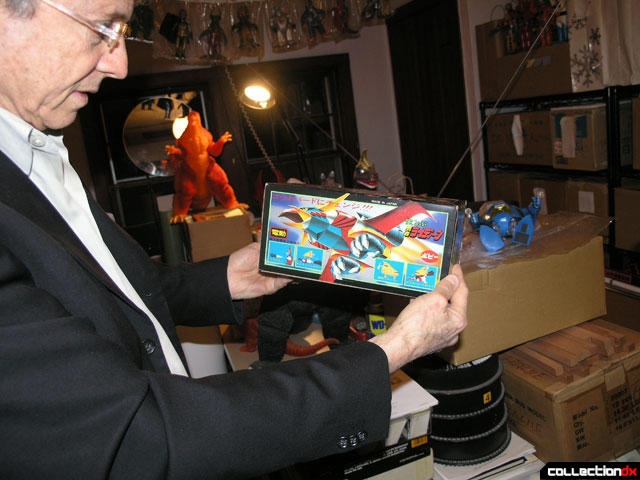 As I pulled the top off, everything was still sealed in baggies. The cardboard inserts were never removed. It was beautiful. I didn't want to be the one to take it out of its coffin, so I let Warren. It was such a great moment, reinforcing my need to get one.

The evening was full of Missile Firing vinyls. I've never owned one, but seeing them in person makes me want to get started. The Mecha Godzilla was amazing. 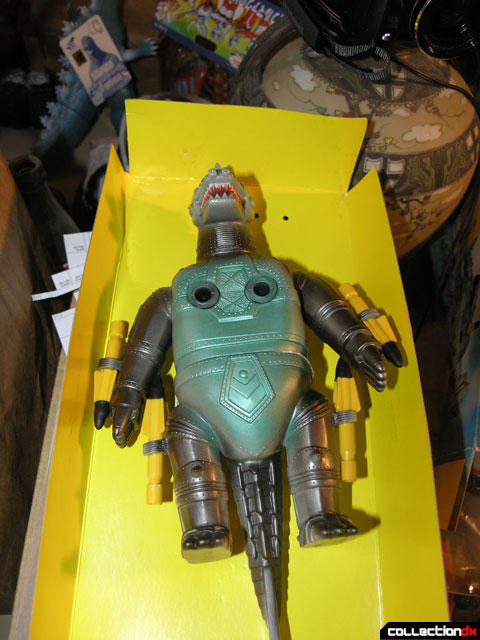 From there it was show and tell. Each box opened got more "ooh's" and "aah's" than the last. Chogokin, vinyls, even some prototypes. On display was a Diapollon store display, which ironically, another collector had brought to the gathering in San Francisco. 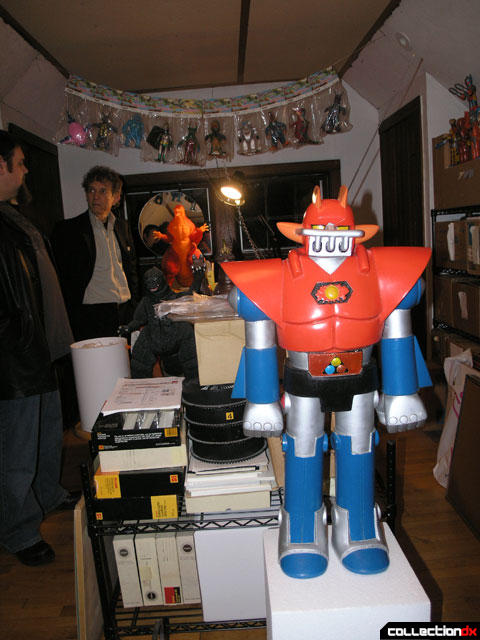 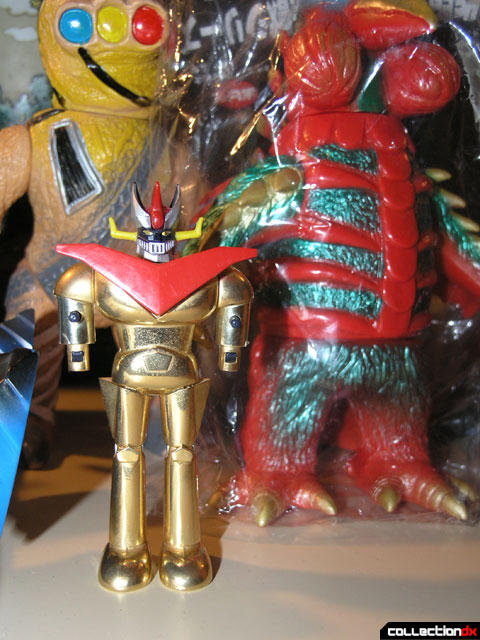 Josh Fraser brought his laptop and fired up Skype, and in minutes we were live with the other toy nerds on the roof of Kimono My House in San Francisco. All of the greats were there. CollectionDX staff Nekrodave, Sanjeev and Jeremy were there, as well as luminaries such as Alen from ToyboxDX, Ed from Robot-Japan, Brian from Super 7 and many more. 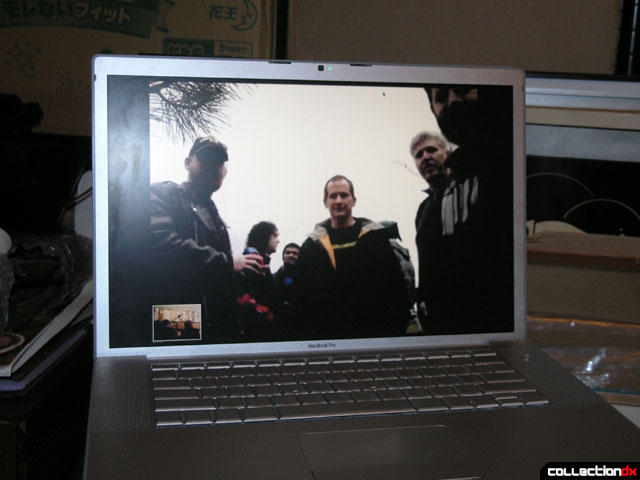 We were jealous as hell, but hanging out with Warren was one helluva consolation prize. 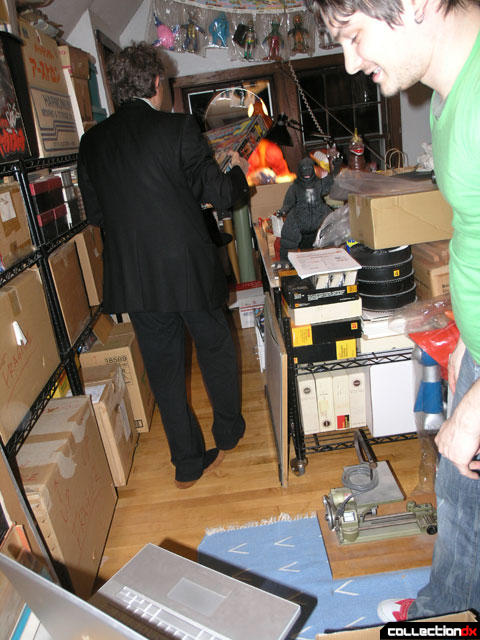 It was a great experience being able to be connected to that gathering even though I couldn't make it in person. It was like missing a high-school reunion, only one that was filled with people you liked. 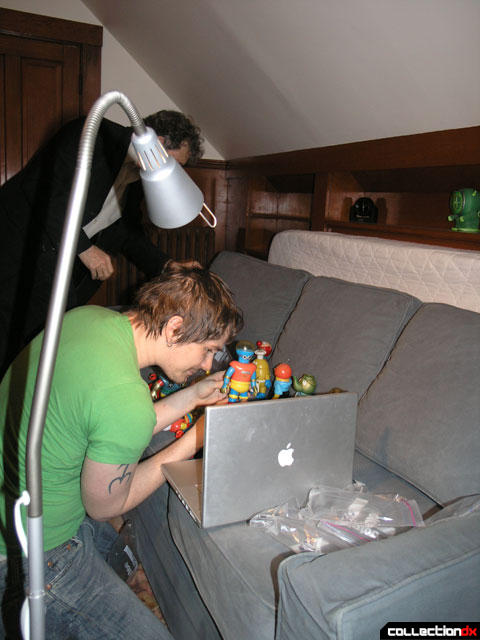 Special thanks go out to Warren, for inviting us into his home, and of course to Erik Sjoen and Alen, for throwing the party out in San Francisco.

Hopefully in 15 years I'll be doing as well as Warren is. He's an inspiration. 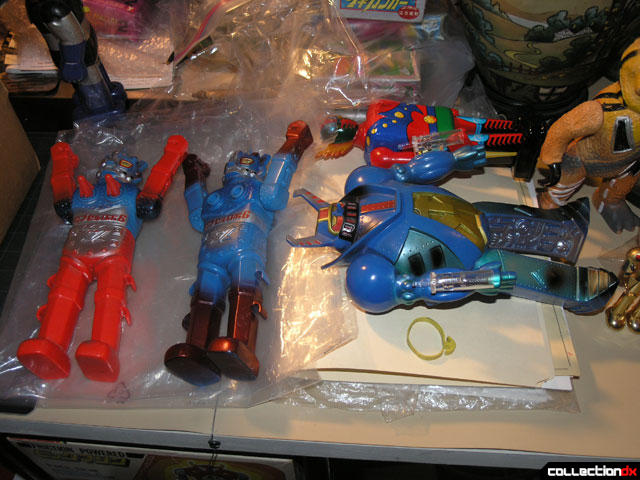 That red limbed Capsule Robo G in the last picture is amazing. I would gladly kill each and every one of you get it. I'd heard about it, but never seen it until last weekend. That is the only known specimen, I believe.

Pictured in that laptop image left to right is me (Pepsi in hand, as always), Jeremy, Sanjeev, Mike Johnson from ClubTokyo, Jim Maitland (aka "vintagevinyl" from Skullbrain) and Brian Flynn from Super7. For those keeping track.. Oh and the Diapolon store display at KMH house belonged to Mike Parisi and he actually still had the price tag on it...$450!! That thing costs about 10x that now, or more..

Now, all we need to do is recruit Warren to review each and every one of his toys for CDX... ;)

"That red limbed Capsule Robo G in the last picture is amazing. I would gladly kill each and every one of you get it. I'd heard about it, but never seen it until last weekend. That is the only known specimen, I believe".

Heh..Warren and I met for Dim sum at China Pearl the day before and he brought it with him and I was choking on a dumpling when I saw it.

I had not been to his temple of toy doom is a long time. It was somehow centering to see the same boxes and fading notes on each. Warren is a true statesman and scholar of the hobby.

We were all glad the skype worked. It was surreal for sure seeing you guys out there. Wish I could have made it.

In the maelstrom of the event, I never got a chance to meet Mike Johnson...and, apparently, I was right there over his shoulder! ;P

Can't even recall the number of fantastic vinyls that dude's hooked me up with over the years! Eh, well...there's always the next huge toy even...which WILL happen!

Anyway, I'm actually more turned on by that Pegas in the last pic than the Capsule Robo G! Thing of beauty!

Nice events! I used to live up in Watsonville in the late 1980's and I remember my parents taking me to Kimono My House as what I remember that it was the only place in the San Francisco area that sold Japanese toys and such although I remember going to a shop in Monterey. I bought a nice robochanman set of Super Mario Brothers figures and mascots. I still own it and it still has the Kimono My House Tag on it. along with Pony Toy, Kimono my House was really one of the first retailers to sell Japanese toy items on the West Coast and it quite sad to see them go as they were one of the last links to anime past in California.

Kudos to Warren to assembling a collection as beautiful as that. I really wish I could focus on one Hobby but I have too many interest and I have to spread the love out. I don't even recognize half the items pictured! I hope some of his items are documented and Josh next time bring your photography canopy!

I need to make an effort this year to meet up with my fellow DX-ers, Hopefully I will finally meet you guys in person, you are having too much fun to be left out of all of this!

Amazing collection,it is indeed hard to keep up with ur hobbies for 25 yrs you know, really envy ur passion and collections.

If you own the book "Super #1 Robot: Japanese Robot Toys, 1972-1982 by Tim Brisko" I wonder if Warren's toys are featured there? They should make a second addition to that really great book and put his stuff in it.

Actually if you look at the first couple of pages and look for the small paragrapgh giving thanks, you will see Warren and I are both there as we have toys in the book.

I just discovered and bought Super#1... now I know there will be some good pictures. That collection really is awe-inspiring. I love that funky blue guy in the last pic.

Another thing I was wondering, what happened to all the stock of KMH when it closed?

KMH is just closing their physical retail shop, but will continue via online. Thats what I understand of it.

Thanks for the info, I had not realized there was a webspace... definitely something to check out then.

A mint in box Dyna Robo?!

I bet the dude would be a millionaire if he sold his entire collection.