In my humble opinion, I believe the golden age of toys was between1978-1988. That ten year period had released some of the finest line of toys ever: Star Wars, M.A.S.K., GI Joe, He Man. LEGO, Godaikin, Micronauts, Transformers, Shogun Warriors, Thundercats…. really this list can go on and on. If you were there in the 1980’s you could be blindfolded and be sent into a toy store and whatever you reached for would have been a great toy.

Many of these lines are still very popular that one can even go into a toy store today and pick up a GI Joe figure, a Transformer and Star Wars figure nearly 30 years since the lines were first introduced. Who would of thought it could have all happened again.

Because there were so many great lines it was quite hard as a kid to settle on one particular series of toys. For me it came down to this: Gi Joe, Robotech, Godaikins, and various model kits. Sure I had a few Transformers, M.A.S.K. and Silver Hawks toys but my heart was and still is set on GI Joe, Chogokins, real robot era and aviation modeling.

Around 2005 I was going through a personal crisis. I hit 30 and I knew my days of debauchery were over. Over my late teens and twenties I had moved away from the things that I had enjoyed doing as a kid such as building modeling kits and collecting toys. That was also the year I discovered Collection DX and the site made me dig back into my old bins of toys and rediscover what I already had and forgotten about. Collection DX also partly inspired me pick up the ‘ol X-Acto #11 blade and build model kits again.

My good friend, film director John Garside, earlier in 2005 decided to dig out his GI Joe’s or as he calls them “Joes,” and collect them again. Feeling inspired again I also dug out my Joes and began to go through them. I was amazed with what I still had but also disappointed that many of my key figures were sold off when I fell out of interest with them in Jr. High and High School. Regardless it was just like the good old days of having a best friend with shared hobby of collecting Joes.

The worst factor of all is that I just simply forgot what weapon went with which figure, what their names were, what series or year did the figure come out etc. It just was not coming out of my brain as it had been so long.

What kicked John and myself to get full gear into collecting those “Little Joes” again was a timely release of Mark Bellomo’s book The Ultimate Guide to GI Joe 1982-1994 in 2005 published by KP Books. Before the book was released we were just collecting in the dark but Mark answered all those questions and more.

Hasbro’s GI Joe: A Real American Hero was a 1982 reimagining of their classic 12inch Doll line from 1966. By the late 70’s production and sales of classic 12inch dolls had slowed down, most likely due to the original kids that Hasbro was marketing to were getting older and the oil crisis of the late 1970’s that made the toys unprofitable because the higher cost of materials. 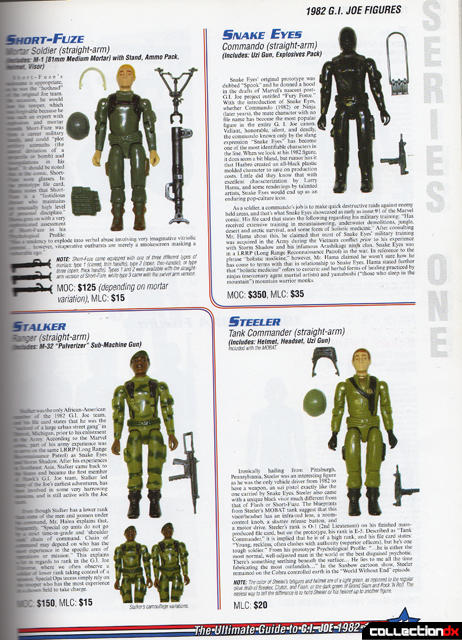 Larry Hama, a staff writer from Marvel Comics was hired by Hasbro to reimage and resize the GI Joe line and reintroduce it to a new generation. Ironically the toy line was to be focused on the military vehicles with the multi-articulated action figures being more of a secondary focus. But Larry’s brilliant multi-cultural and colorful characterizations of the figures has endured to pop culture icons partly to do with the well written Marvel Comic book and Sunbow’s TV series that soon aired after the line was reintroduced.

For those of you who want to relive the glory days of a Real American Hero, Mark Bellomo’s book is a great addition to the toy collector’s library for both the casual and serious GI Joe collector. The book is divided into years of release. In the years released section those figures and vehicles are divided into GI Joe and Cobra and they are listed in alphabetical order.

The book is full color and all the figures are displayed in a no nonsense layout with all their accessories pictured beside them. This layout can get more tedious with vehicles as the top photography does not capture the full dynamics of the vehicle, but works well if you just want to identify the vehicle. The vehicle section also has a list of the most often missing parts of vehicles if purchased loose. 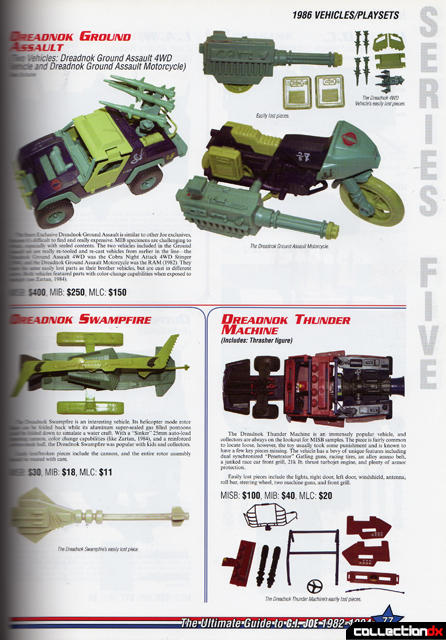 Mark also identifies parts or accessories that are extremely difficult to locate such as Hardtops Gun and Microphone and Heavy Metal’s microphone that alone could sell up to $100. It is also great to see some rare toys that were never seen such as the 1983 Sears exclusive cardboard Cobra Missile Base and the 1987 GI Joe Cereal exclusive mail away Starduster. I had completely forgot that the 1983 Mail Away Duke came with a small sticker of the USA flag, I am not going to hunt it down but it is good to know that kind of information if one is a serious collector.

The book is also a price guide. Remember that it is just a guide to give you a ballpark answer of what your figure might be worth and when it comes down to it your figure or vehicle is only worth what somebody is willing to pay for it. For example Starduster is listed at $75 MISB but it regularly sells on eBay loose for $175 and there are many figures that are listed for $25 loose that I can usually pick up for under $10.00. But the prices are going up even from 3 years ago and I know the GI Joe live-action movie is going to increase the popularity of the original line.

Although I narrowed my own collection to the years 1982-1985, seeing what was released in the late 80’s and early 90’s before the line was killed in 1994 is was quite interesting and great to see those years documented. 1993 alone had over 100 figures released and is considered the most difficult year to complete due to the sheer number of figures and accessories. I will be cherry picking a few figures after 1985 and it is good to see what other figures that look interesting are worth picking up that I did not know about such as the chrome plated Super Soldier and the figure specifically called GI Joe.

There are a couple of faults of the book. The beautiful artwork of the backing cards and boxes are not reproduced. The file cards are not reproduced but the prototype cards that Larry Hama wrote before they were edited by Hasbro are quoted are included and brings new dimensions to many of the characters. Even the misstep figure of 1986’s Crystal Ball prototype filecard is a fantastic read! Some of the pictures also could have been lighted better but as is, it is acceptable. Lately some of the pages are beginning to fall out and I wish the publisher would release a hardback bounded edition of this book. Mark has stated that many of these faults with the first edition will be corrected in the new edition of the book.

There is not a week that goes by that I do not have a page open researching some obscure GI Joe fact. This book is shortly going to be re-released with updated information and new interviews with many key developers of the GI Joe line at Hasbro. I am looking forward to picking up the new book but I would suggest if you come across this edition it is a definite pick up of the serious and casual Joe collector.

Awesome, thanks for posting this, Leonardo! As you know, I'd LOVED GI Joe as a kid and while I have no intention of starting to buy then again, I could totally see myself picking up this book just to have it and reminisce. In fact, I think it would be cool to have lots of similar books about many of the toy lines you mentioned. Would be a great way to go back in time without having to spend a ton of money actually buying the toys again!

Glad you liked the review. Although I failed to mention it I believe this book is great for somebody such as yourself who wants a document of the GI joe toys they once had but noy interested in collecting GI Joe again. This is the perfect book for that although I would wait for the new addition coming out shortly. This version is available on Amazon for around $10.00 less than half of it's list price of $25.00 when it came out three years ago.

I also just ordered Bellomo's Transformers book. I admired Transformers greatly but there was just too many great toy lines out ther and I never really got into collecting them but I would be happy just to have a good book filled with all the Transformers that I never bought.

Pick it up you will enjoy it!

I have this book as well, and must agree, it is definitely something no G.I. Joe fan, either die-hard or casual, should be without. Great pics, thorough descriptions, and comprehensive coverage of figures.

My *only* complaint about the book is the inclusion of estimated values, as this will soon date the book, if it hasn't already. Otherwise, I'm glad I have it, and I'll probably also pick up the 2nd Edition.